The commercial talk station’s team of Mark Bickley and Stephen Rowe have fallen so far that they are now behind ABC 891’s Drive program – a position once unthinkable for the long dominant sports show.

The ratings survey, which covers the lead-up to the AFL season and the first two full rounds and most of the third round, would be deeply concerning to FIVEaa management.

The station’s success has been built, to a large degree, on sport.

However, Triple M’s Drive team of Dale Lewis and Andrew Jarman have now notched their second consecutive ratings victory over their sports rivals, and have established a solid lead. Triple M put on 2.1 points to reach 12.3 per cent of audience share in Drive, compared to FIVEaa’s 8.4 per cent – a drop of 1.1 percentage points.

ABC 891’s Ian Henschke is on 9.1 per cent after a modest increase in share.

Triple M is in third position, followed by Mix, the ABC and FIVEaa.

The news for FIVEaa isn’t much better in the other crucial shift – Breakfast.

The team of David Penberthy and Will Goodings lost 0.9 percentage points to hit 11 per cent, falling to third behind Mix102.3 and the leaders, ABC 891’s Matt Abraham and David Bevan on 17.3.

Abraham and Bevan lost share after a huge first survey of the year, falling 1.6 points, but still maintain a significant lead.

Another big winner of the survey period was ABC 891’s Evenings presenter Peter Goers who has extended his lead in the shift.

In the last survey, Triple M was in fourth spot. 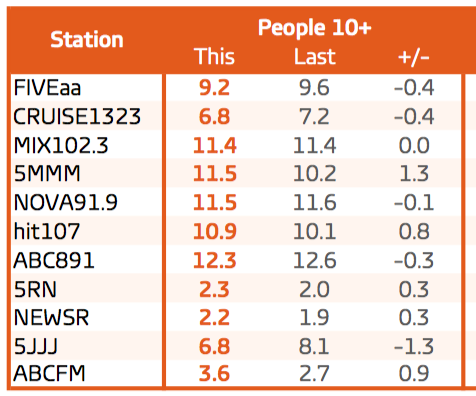