The plan would see thousands of plant species planted along the creek running through the south parklands, along with modifications to creek banks to improve safety for nearby children.

The council administration presentation on the project came on the same day that dozens of trees were felled in Rymill Park and Rundle Park to make way for the extended O-Bahn.

Councillors spent some time debating whether there were cheaper options to deliver what was nonetheless described as a “gorgeous” and “magnificent” South Park Lands Creek Rehabilitation Master Plan at a committee meeting last night.

But the debate appears to have been premised on confusion about the status of funding for the five-year revegetation and creek bank safety improvements program.

A council spokesperson told InDaily the council had already approved most of the budget spend on the program as part of its city asset renewal program.

The spokesperson said there had already been a $2.5 million allocation for the program in asset renewal budgets over the next three financial years.

“The rest of the $4.1 million is factored into the 10 year financial plan, however council only endorses a three-year rolling asset renewal program on an annual basis,” the spokesperson said.

“What we are seeking from (the) council is direction on what service standard they would like to apply to this project (basic, high or premium).

“Once we have that direction it is proposed to go to public consultation on council’s preferred option.”

Area councillor Natasha Malani told last night’s meeting that the council was in “tight” budget times and wanted to know the cost of the cheapest workable version of the plan so that the council could avoid creating “expectations” that could not be met by putting the $4.1 million plan out for public consultation.

Fellow area councillor Anne Moran described the program as “delightful” but “too expensive”.

North Ward councillor Phil Martin said he had been on a tour of the proposed revegetation site and urged the council to go out to consultation on the plan immediately.

Instead, the council recommended that the master plan be “revised to include the standard option and funding breakdown and time frames”.

Malani told InDaily this morning that “we need to look at a range of options”.

“I think that it can be done over longer than five years,” she said.

“We can never be too prudent (and) we can always … look for cost savings.

“We are looking for long-term, sustainable ways of delivering projects.”

She said it was council’s job to ask questions and get clarification from its administration on council projects.

“In an ideal world, we would pick the premium (version of the program),” she said. 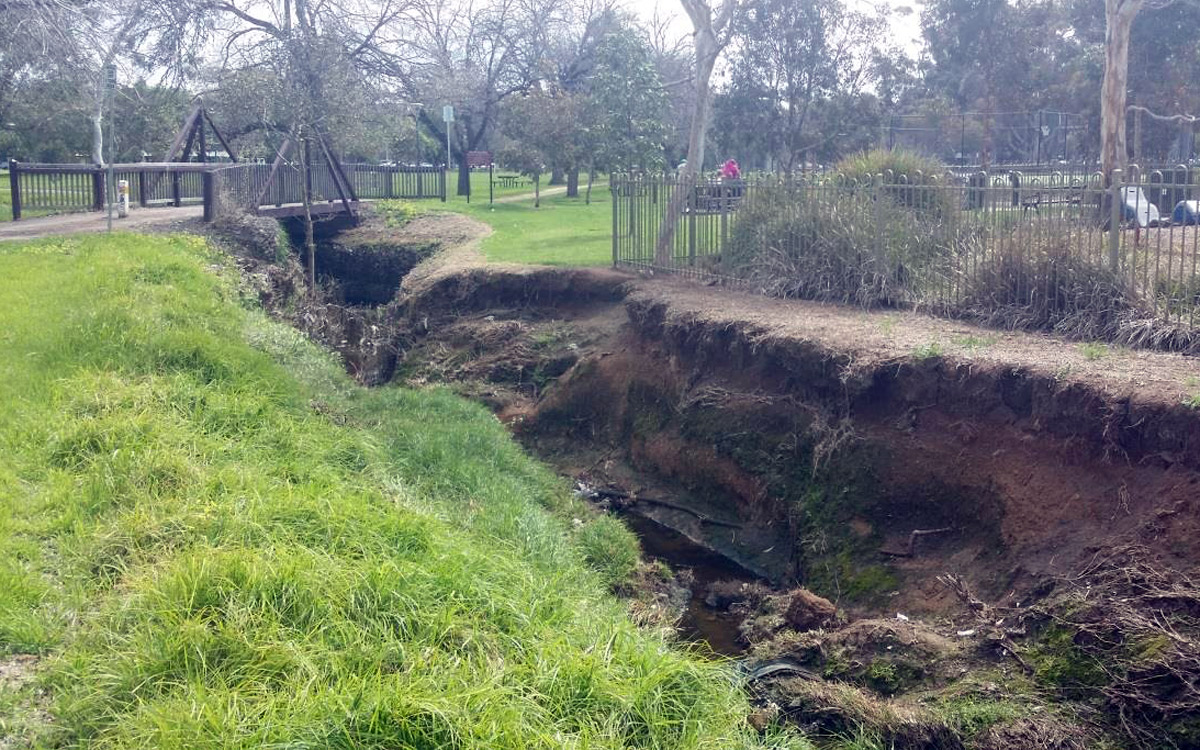 One of the eroded creek banks the program aims to fix.

Malani said the revegetation program was also a public safety measure because of steep, eroded creek banks in the south parklands.

Martin told InDaily this morning he didn’t know money had been allocated to the program last year.

He said he was surprised there hadn’t yet been a serious injury or death resulting from the steep, eroded creek banks.

“There are serious issues about flood mitigation and public safety that need to be addressed immediately.”

The council will next week reconsider the revised master plan and decide whether to release it for public consultation.