“A lot of people tell me … you’ve got to return it to parklands,” Hanlon told a gathering of about 350 property industry representatives at a corporate breakfast this morning.

“I go, jeez, I don’t see too many people with their picnic baskets wandering down there at the moment … out in the middle of seven hectares inside the RAH.”

Hanlon used his speech at the Adelaide Oval for the 2016 Pitcher Partners property breakfast this morning to warn that the redevelopment had to be right to ensure the “survival” of the East End.

He said “exciting opportunities” had been presented to the State Government by developer groups, now whittled down to a shortlist of three, for the future of the site.

But, he repeated, “it’s not going to be parklands”.

“If you were going to make it parklands, (you) would still have to spend 200 or 300 million dollars just to do the demolitions and to clean up,” he told the crowd.

“You can’t just turn those back into parklands and think that somehow someone’s going to be benevolent and do that for you.

“But what we can do is make it a place that everyone wants to visit.”

Advocates for returning at least part of the site to the parklands, including city councillor Phil Martin, are worried the redevelopment of the site could be the first step in a broader commercialisation of the parklands by the State Government.

“The parklands are being turned over to development.

“There’s no debate that what’s planned for the whole of the parklands will in years to come be regretted by future South Australians.”

While Martin said he did not advocate returning the entire site to parklands, some parts of it – such as the westernmost buildings – should be.

He said it would be more appropriate for the redevelopment of the site to feature a new contemporary art gallery, or even a new parliament house, rather than any commercial residential development.

He stressed, however, that he was not privy to the specific proposals before the Government. 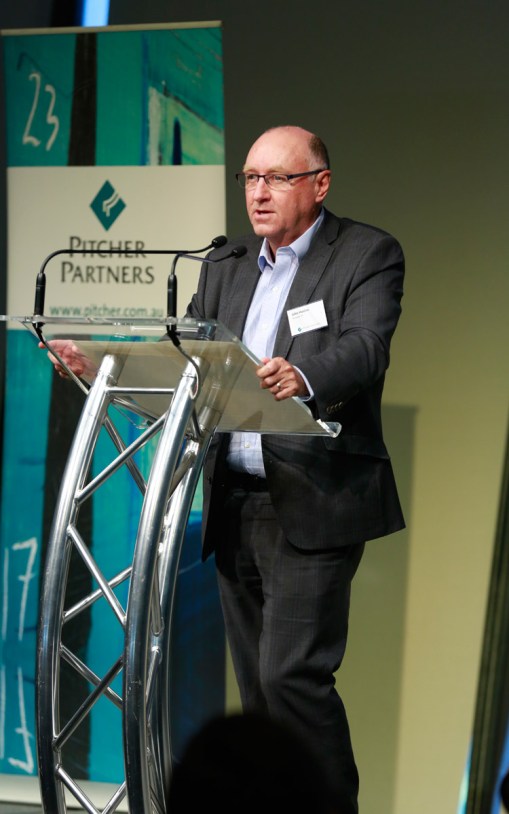 “It appears likely that (the redevelopment will be) one that’s not necessarily for the greater good of South Australians, but for the benefit of commercial and private investors,” Martin said.

“It’s not too late – they can make a decision that will have benefits for all South Australians.”

But Hanlon told this morning’s audience that that’s exactly what the redevelopment would do.

“What’s been presented to us, all of those ideas, are about people visiting that site like we’ve never seen before.”

He said survival of the East End would turn on the quality of the redevelopment.

“Remember – we’ve got to replace about 7000 people a day down there. That’s what we’ve got to do to make sure the East End survives.

“That’s what we intend to do.”