Immunisation of one-year-olds in one out of every five SA postcodes has been falling each year since 2011, an InDaily analysis of the latest data from the National Health Performance Authority shows.

And hundreds of SA suburbs fall within postcodes where immunisation rates are below 90 per cent for one-year-olds.

In total, 44 South Australian postcodes, containing more than 220 suburbs, had an infant (one-year-old) immunisation rate below 90 per cent in 2014-15.

As Head of General Practise at the University of Adelaide Professor Nigel Stocks explains, “herd immunisation occurs when a sufficient number of people… is immunised so that there are too few people for transmission if the disease arrives in a community”.

“What most health authorities would aim for is at least 90 per cent of the population being vaccinated.

“90 per cent is the minimum that we try to obtain (but) we try to get higher.”

For some diseases, a 90 per cent immunisation rate is not enough.

According to the Commonwealth Department of Health, “the proportion of the population which must be immunised in order to achieve herd immunity varies for each disease, but can be up to 95 per cent for some highly infectious diseases, such as measles”.

“The underlying principle is the same: once enough people are protected, they help to protect vulnerable members of the community by reducing the spread of disease.”

Immunisation rates below the threshold

The map below shows each of the postcodes where the proportion of fully immunised one-year-olds was below 90 per cent in 2014-15.

Zoom using the tool in the upper left hand corner to explore the map. Click on a postcode to find out the immunisation rate for one-year-olds and the suburbs in that postcode.

If your postcode isn’t highlighted on the map, that means more than 90 per cent of the one-year-olds in your postcode were fully immunised in 2014-15.

A comparison of immunisation rates against socio-economic status from the last census shows that the poorest South Australians are least likely to vaccinate their one-year-olds.

The graph below shows the socio-economic ranking, from the most recent census, of each of the state’s postcodes set against the immunisation rate of one-year-olds in that postcode in 2014-15 (where recorded immunisation data is publicly available).

The blue trend line shows that, on average, the lower a person’s socio-economic status, the less likely they are to immunise their infants. 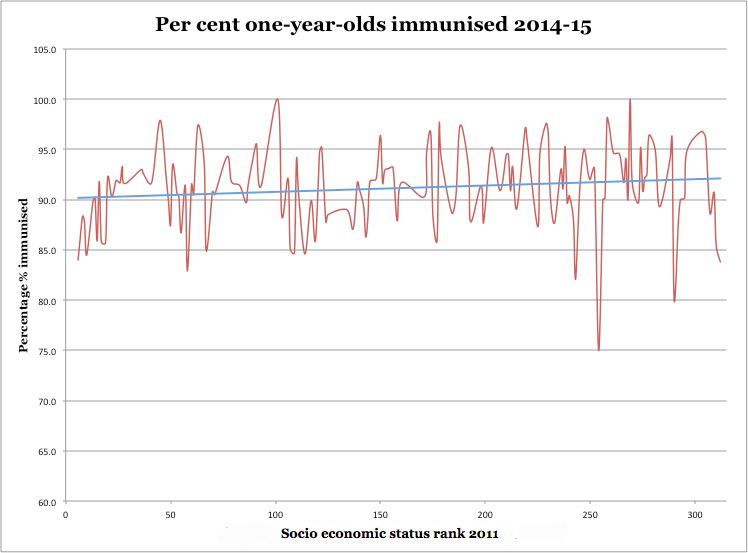 However, it’s also clear that on both ends of the socio-economic scale – the very wealthy and the very poor – immunisation rates drop off significantly.

Immunisation rates among the middle classes, however, are higher, on average.

Here’s a graph with a trend line that fluctuates with the average immunisation rate along the socio economic scale: 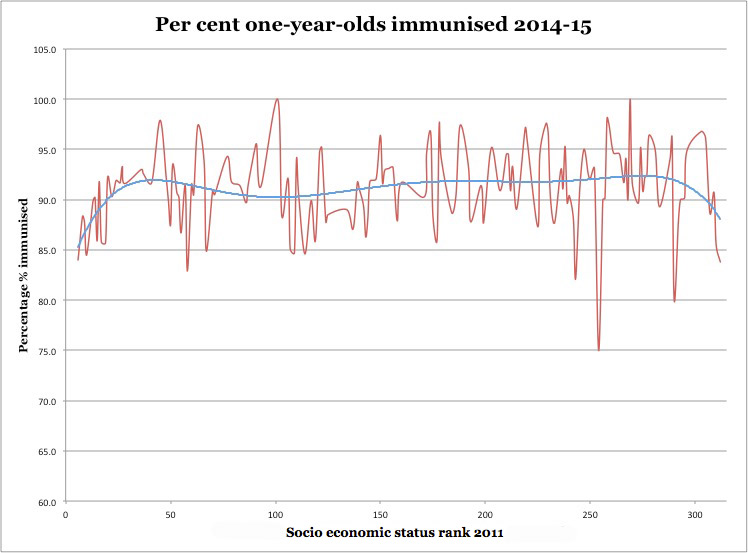 Stocks says that on the upper end of the socio-economic scale, the influence of anti-vaccination “pseudo-science”, and poor health literacy, have had the biggest impact.

“I’d take that as being (high socio-economic status) people having a very good education, but not necessarily a very good health literacy education,” he said.

“With the high socio-economic status group, it’s about attitudes (to immunisation).”

Stocks says one of the largest myths surrounding vaccination – that it causes autism – needed to be refuted in order to improve immunisation rates.

“There was a paper that was published in the 1990s by a researcher (who) had concluded a study that seemed to link autism (with vaccinations),” he says.

He says the study’s findings were unable to be replicated in later studies, and that it had been retracted from the journal in which it was published.

According to SA Health’s Communicable Disease Control Branch Director, Dr Ann Koehler, “some people have concerns about vaccination, but they should be reassured that the risk of getting the disease far outweighs the risk of immunising against it. All vaccines used in Australia have passed stringent testing over many years”.

“Vaccination ensures diseases are not reintroduced in the community or that serious outbreaks of those diseases do not occur.

“Immunisation is the most effective way of protecting people against diseases which can cause serious illnesses and sometimes death.”

According to SA Health, common side-effects of immunisation are redness, soreness and swelling at the site of an injection and mild fever, and most side effects from immunisation are minor, and last a short time.

He says this access is a particular problem for parents living in rural and regional parts of the state.

Research compiled by the University of Adelaide’s Robinson Research Centre last year concluded that socio-economic disadvantage and anti-vaccination beliefs were both factors in failures to immunise.

But socio-economic disadvantage was a more important factor.

“Socio-economic disadvantage was an important reason why parents had children who were either partially immunised or not immunised at all,” said the university’s Associate Professor Helen Marshall.

“… The majority of infants who were incompletely immunised had parents who do not object to immunisation – something else is getting in the way.

“This research found that the majority of parents with partially immunised children are in favour of vaccinations, so we need to look at how we can remove the barriers experienced by these families.”

Going downhill: Where immunisation rates are falling each year

Data on immunisation rates of one-year-olds is not available for 2013-14.

Stocks says the consistent decline in infant immunisation rates in several South Australian postcodes was concerning, and reflected a lack of awareness about the importance of immunisation.

“There’s still a possibility that polio can be reintroduced from overseas.

“It’s not something that you want to be taking a chance with.”

Even in highly immunised societies, Stocks says, pockets of non-immunisation in the community can be dangerous, particularly for newborns not yet old enough to be vaccinated.

You can use the interactive map below to see which postcodes have seen the biggest decline in immunisation since 2011.

Most improved: Where immunisation rates are growing each year

But it’s not all bad news for public health advocates.

In total, 11 postcodes improved their immunisation rates for one-year-olds over the past several years.

And according to Koehler, there have been notable improvements in vaccination rates among Aboriginal children in South Australia.

“We have seen some notable improvements in vaccination rates among Aboriginal children particularly.”

The interactive map below shows those postcodes where immunisation rates have increased from 2011-12 levels in 2012-13 and 2014-15. Use the zoom tool to take a closer look.

Immunisations are administered by a range of bodies, including councils, RFDS, Aboriginal controlled health services and community health services, and pharmacies can provide the influenza vaccine.

Vaccines recommended for children and adults on the National Immunisation Program are available at no cost to people who are at risk of serious complications.

You can find official immunisation information, and answers to common questions about vaccination, from the Commonwealth Health Department here.