The plan, released today by federal agency Infrastructure Australia, finds that Australia’s smaller cities are expected to grow at a slower rate over the next two decades than the larger cities.

“Of our four smaller capitals, Hobart and Adelaide are projected to grow the slowest, increasing by 14 per cent and 24 per cent respectively between 2011 and 2031,” the plan says.

“Darwin is projected to grow more quickly (32 per cent), however as this applies to a relatively small base, its population will remain small by comparison.

“In contrast, Canberra will experience high growth (41 per cent) resulting in a boost of around 150,000 people to the city’s population by 2031.”

The plan says these smaller cities are highly liveable but need more people to prosper.

It recommends that: “Governments should aim to grow the population of our smaller capital cities, in particular Adelaide,
Hobart and Darwin beyond their current projections.”

“These cities offer access to impressive natural and built environments, high-quality infrastructure and services, cultural diversity and a skilled and dynamic workforce. We must ensure that we make the best use of these cities by growing their population and ensuring their continued economic prosperity.”

The agency says the 2015 Australian Infrastructure Audit found the performance of urban roads and public transport in Adelaide was a key challenge for South Australia.

The audit estimated that the cost of delay on Adelaide’s urban transport network was $1 billion in 2011 and would grow to $4 billion by 2031 in the absence of new infrastructure investments.

It also highlighted the relatively low use of public transport in Adelaide compared to other cities.

An expanded tram system is listed as a priority solution to this problem, with a timeframe of five to 10 years.

“The AdeLINK  network will revolutionise our city and encourage people to live along these corridors, but to get these projects moving we require cooperation and funding from the Commonwealth Government,” he said.

Other priority projects identified by Infrastructure Australia include the electrification of the Gawler rail line, listed as a high priority, and sealing the Strzelecki Track in the state’s far north.

The report also listed as priorities:

Nationally, the agency has identified 93 projects and initiatives for its priority list, along with a 15-year infrastructure plan it says would save Australian households almost $3000 a year by 2040.

Western Sydney Airport and a Sydney metro connecting Chatswood to the CBD and the city’s south have been flagged as high-priority initiatives in need of further assessment and development.

Without additional capacity, 42,000 potential jobs will be unrealised in the next 20 years, it says.

It’s also recommended another rail line for Brisbane, with the existing rail connection into the CBD set to reach capacity in the next decade, and the road and bus network already at or close to capacity.

A metro with twin nine kilometre tunnels is also recommended for Melbourne, with its rail network operating at or close to capacity.

A high-speed rail link between Sydney, Melbourne and Brisbane remains on the cards, with the report recommending a corridor be preserved for future development.

Birrell said Australia was at risk of failing to capitalise on historic opportunities presented by the rising Asian middle class if it did not invest in nation-shaping projects.

Major Projects Minister Paul Fletcher said the Turnbull government would consider the report, insisting it would be an important tool for commonwealth and state governments.

“It’s a 15-year plan, these are not projects that can all be funded overnight,” he told ABC radio. 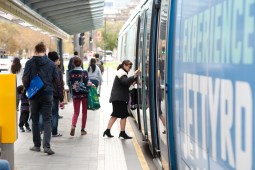