The march by thousands of Port supporters from Rundle Mall to Adelaide Oval is an emotional prelude which builds the fervor for the ensuing on-ground clash.

This year an expected 10,000 supporters will detour from their traditional walk and begin a new ritual to honour the fallen by beginning their journey to the Anzac round clash with Geelong along Adelaide’s new Anzac Centenary Memorial Walk.

With about 10 weeks until the April 23 match, the walkway is a bustle of machinery, workmen, soil and yard supplies, but the Government insists it will be completed in time.

Port chairman David Koch told InDaily commemorating Anzac Day along the new walk would be an honour, with the club and fans paying their respects to serving and fallen South Australians and respected former players who served in battle.

“It (Anzac round) is probably one of our top two marquee events for the year,” Koch said.

“You’re going to get 10,000 people on its first weekend, in one march, coming down and for us we’re really honoured to be able to do it.

“We’re the only club outside of Victoria that’s come from community roots, a community club up to the national league and we have a real Anzac and defence force tradition and history in our club… Peter Badcoe, South Australian VC winner, Port Adelaide… Bobby Quinn, great Port Adelaide captain, dropped everything and went off to war, so we have our own heroes within the club that we really respect that tradition and our links to Anzac.”

Minister for Veterans’ Affairs Martin Hamilton-Smith was confident the walkway would be ready in time for Port fans to march to their Adelaide Oval clash with the Cats.

“I’ve been the Minister now for 18 months and it’s been an interesting journey, not without its challenges, but we will open the walk by Anzac Day,” he said.

“It’s a credit to all involved and I particularly want to thank the Governor for making the land available.”

The parklands of Government House along Kintore Avenue have been shaved by 10 metres with an open-blade fence interspersed by granite blocks featuring Anzac images, so crowds can view the gardens along the walk.

“I think apart from a wonderful commemoration for Anzac, this is a significant improvement to Adelaide’s sense of place,” Hamilton-Smith said.

“You’ll now be able to walk with some grace from Rundle Mall to the Torrens while viewing Government House and this beautiful walkway.” 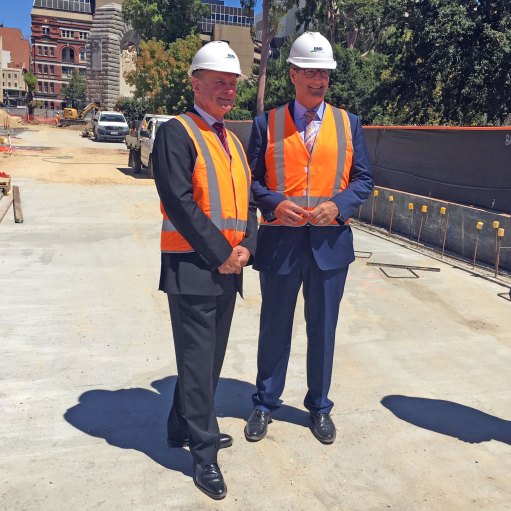 Overseeing the project, former SA Governor and Veterans’ Advisory Council chairman Sir Eric Neal said he was impressed by the work and watching its progress as the date drew near.

“When the Premier [Jay Weatherill] announced it just before Anzac Day last year, he said our aim would be 12 months and hopefully we will be all right.”

Koch said the Power march would likely be the first large parade to travel down the new walk, and there would be no better way for the club and supporters to commemorate their Anzac links.

“It’s that Anzac spirit. If you want to gel a community, one thing you get no argument out of is something like this,” Koch said.

“I always reckon Australia Day is a celebration of who we are. Anzac Day is our soul.

“Australia Day is the party where we celebrate ‘thank god, we were born here’, or migrated here. But Anzac Day is that special. It’s all about the heart and soul.”