Those tactics have now dramatically altered, with Weatherill signaling a return to a taxpayer-sponsored political campaign against Commonwealth budget cuts to the health and education sectors, as he declared: “The rules of the game have been changed.”

Opposition Leader Steven Marshall sought to use yesterday’s Question Time to hammer Labor over its GST stance, which was effectively rejected by Prime Minister Malcolm Turnbull in recent days.

The Liberals have sought mileage from Labor’s internal divisions on the issue, with federal colleagues – including party leader Bill Shorten and local backbencher Nick Champion – rejecting any increase to the GST.

Asked if he agreed with Champion that the tax was “regressive” and “goes against Labor values”, Koutsantonis said: “The Member for Wakefield is entitled to his opinion.”

But when pressed on his own view, the Treasurer replied: “I agree entirely with the tactics of the Premier of South Australia.”

The Premier’s new tack was signaled today as he convened a meeting of several key stakeholders – mostly union officials – from the sectors affected by the Commonwealth cuts to discuss “the next phase” of a concerted national campaign.

“We’re drawing together all the elements of the SA community to ensure this is front and centre in the federal campaign,” Weatherill told reporters after the round-table.

Asked whether public money would again be used to fund the rearguard action, as it was after the cuts first appeared in Joe Hockey’s maiden budget, the Premier said: “If that’s what’s necessary to effectively win this argument.”

“We’re more than happy to support these groups to get their message out,” he said.

Around a million dollars was earmarked for the initial advertising blitz, with Weatherill suggesting “I think there’s still some resources left there”.

He said his GST gambit had been a genuine attempt at finding a solution through “constructive dialogue” but “that was all thrown out the window when [Turnbull] ruled the GST off the table and shifted blame back to the states and territories”.

“The rules of the game have been changed,” Weatherill said.

“We’re now back to where we were.”

That would have been music to the ears of the union delegates present, with SA Unions secretary Joe Szakacs reinforcing that “the union movement was fundamentally opposed to a tax that disproportionately affects low income earners”.

He said the funding cuts had “to be frank, completely wedged the state premiers” who “have got an absolute lack of money to fund critical services”.

“The states do need an ability to raise their own revenue but that ability must be through a progressive taxation system,” he said.

“[But] the big game here, the big money, is the Feds… it’s up to the feds to put their hand in their pockets and fund our schools and public hospitals.

“The onus is back on Malcolm Turnbull to fix Tony Abbott’s budget.”

Weatherill is on more comfortable ground within the Labor movement taking on Turnbull in a scrap for cash.

Koutsantonis himself has been a strident critic of changing the rate or base of the GST, telling media after a Treasurer’s conference in May 2014 that “we won’t be increasing the GST, we’re drawing a line in the sand on this”.

In March last year, he called it a “regressive tax” from which South Australian citizens needed “protecting”.

However, a spokeswoman for the Treasurer today insisted he “has publicly stated his support for the Premier’s position – and advocated that position at a national level”. 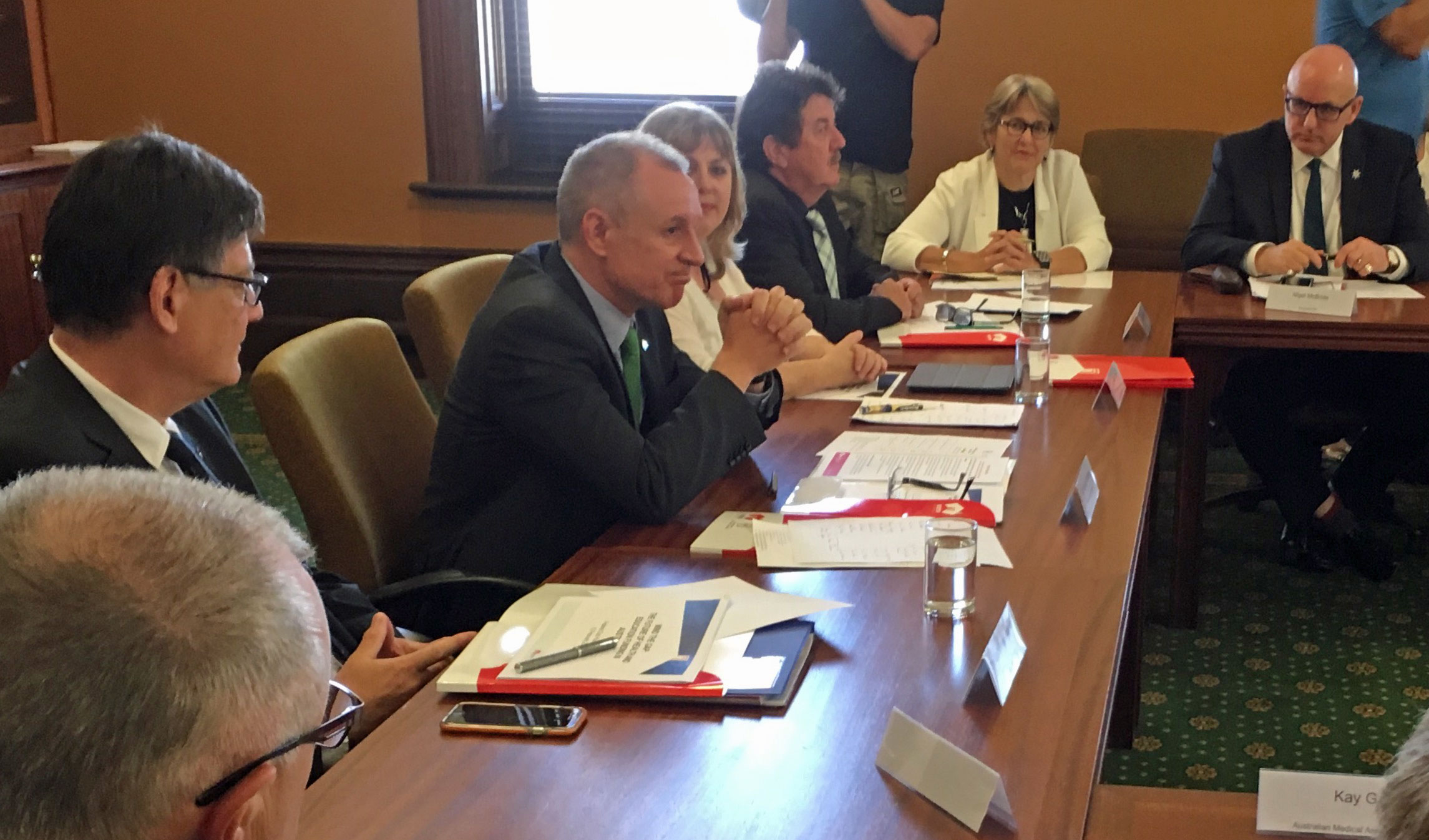 “It was heavily dominated by the unions, and the unions want to run a campaign,” he said, arguing the state was on a hiding to nothing “if all we do is ask for more and more money”.

“The business perspective, which I was happy to bring, is ‘let’s fix the economy by getting tax reform right’… I don’t want to run a campaign, that’s up to the union movement.”

He said SA business was “implacably opposed to increasing payroll tax and land tax” – as suggested by Turnbull last week – which he said was “completely counter-intuitive”.

Weatherill has also seized on the PM’s comments to highlight the fact it is not just state and federal Labor at odds over tax reform, with the SA Liberals long opposing increasing state taxes.

“How does the Opposition Leader feel when the only idea he has ever had has just been kicked to death by the Prime Minister?” Weatherill said in parliament.