Weatherill appeared alongside the New South Wales Liberal Premier on the ABC’s 7.30 last night, pressing the case for a national debate on raising the GST to 15 per cent.

“But taxation is the means by which we educate our children, we treat our sick people, we actually provide for a more equal and more humane society… and we’re going in to bat for taxation to meet those needs, and we also need to do it fairly and we’re trying to get a national debate about that issue.”

A Newspoll published yesterday showed 54 per cent of respondents opposed raising the GST rate, while 37 per cent agreed to the idea – an idea that thus far has not been adopted as federal policy.

“I mean, asking people whether they want to pay more tax… top-of-mind answer to that question is going to be ‘no’, so, I was surprised the number was so high.

“And I believe in the intelligence of the Australian community.”

Baird yesterday stepped up his own proposal for increasing the consumption tax rate, after Weatherill last year flagged a notion that would see the Commonwealth garner greater GST revenues while the states got a larger direct share of income tax receipts.

But the partnership has seen the SA Premier come under sustained fire from federal figures in his own party, with Victorian senator Stephen Conroy accusing him of betraying South Australian voters.

“We’re not suggesting that any one idea is the solution… we’re promoting our ideas, but we want to invite a mature debate about this, not a series of – a slanging match or threats and other abuse that’s hurled around the place,” Weatherill said.

He “welcomed” Baird’s proposal, calling it “another important contribution to the debate”.

“But I don’t think we’re going to get any solution here until we get some clarity around the problem,” he said.

“What we have here is the inability of a nation like Australia to be able to meet the health care needs, the education needs of its citizens… so, on any view of it, we have a revenue problem and what I am supporting is Premier Baird’s identification of this being a revenue problem.”

Baird said he was trying to “get to a position of consensus”.

“There’s a number of ideas that have been put forward… the proposal that we put forward is, well, if you leave the GST as it is, you don’t expand the base, you raise the rate, you get to a level that provides significant opportunities for the Federal Government to pursue a growth agenda,” he said.

Baird said he and Weatherill “may approach the world in a different view, we may have different political badges, but what we’re united on is doing the right thing by the constituents in both his state and my state and across the country”.

“And I think what’s disappointing in this debate is people immediately look for the political opportunities to try and win an election on the basis of scare campaigns,” he said.

But SA Opposition Leader Steven Marshall maintained the rage on Weatherill’s proposal, telling FIVEaa’s Leon Byner today: “Am I supporting Jay Weatherill’s calls for a massive increase in GST to raise more revenue for the Government to waste? No, absolutely not.”

“How on earth is an increase in tax going to solve the problems that we have here in SA?” he said.

Marshall argued while the Federal Coalition was “looking at genuine reform”, the GST proposal they were considering was “very, very different from what Jay Weatherill’s talking about”.

“He’s made it clear that he wants an increase in the GST so that he can have more revenue into the state… what the Feds are talking about is a changed overall tax reform package which would lower corporate taxes as a trade-off for GST,” Marshall said. 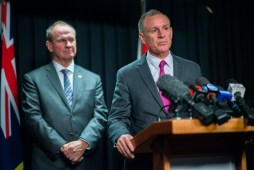 “I say put those things on the table, but the Liberal Party in SA will never support any change in taxation which increases the burden on families and businesses because we want to grow our economy.