NSW last month legalised UberX and other such services, with the Baird administration approving compensation measures for traditional taxi operators. That followed the ACT’s lead in October as the first jurisdiction in Australia to regulate ride-sharing.

In April last year, SA began an independent review of the taxi industry, overseen by a three-person panel.

In November, Transport Minister Stephen Mullighan told InDaily: “I’ve asked for a report by the end of the year.”

However, his office said this week he was yet to receive it.

David Rohrsheim, the Adelaide-bred general manager of Uber Australia and New Zealand, said it would be a “missed opportunity” if the Government did not approve ride-sharing services before next month’s Adelaide Fringe and the ensuing Mad March festivities, as “that’s when transport’s in highest demand”.

“The ACT and NSW governments have signalled to entrepreneurs that they are the most agile and the most open to new innovation,” he told InDaily.

“More than anything, I remain eager to know if SA will have UberX before Mad March, when tourists arrive and transport demand peaks.”

Mullighan said any changes would likely be announced around the middle of 2016.

“I suspect we’ll wait probably a couple of months [after receiving the report] to have a think about it before we decide what our response to the review is and make any public announcements,” he says.

“Where SA is up to is very broadly in line with where other states are at.”

However, both WA and Tasmania have signalled they will proceed with regulating ride-sharing, leaving SA fast falling out of step.

The NSW move, a week before Christmas, followed the state’s own review that began on July 1, two months after SA instigated its inquiry.

“This is not the first place in the world to consider this question,” argues Rohrsheim.

He argues those regulations will also improve the taxi industry, which has strongly opposed the introduction of Uber and its ilk.

“It’s a litmus test for (the Weatherill) Government,” he said.

“There’s a lot of talk about embracing innovation – the autonomous vehicle campaign is laudable – but if you really want to get a reputation for innovation you’ve got to get better at walking the walk.

“Autonomous vehicles are a long way off [but] here we are with ride sharing ready to go today…we asked for permission to operate and we’ve been waiting for a year for a decision from Government – what sort of signal does that send to other innovative start-ups?” 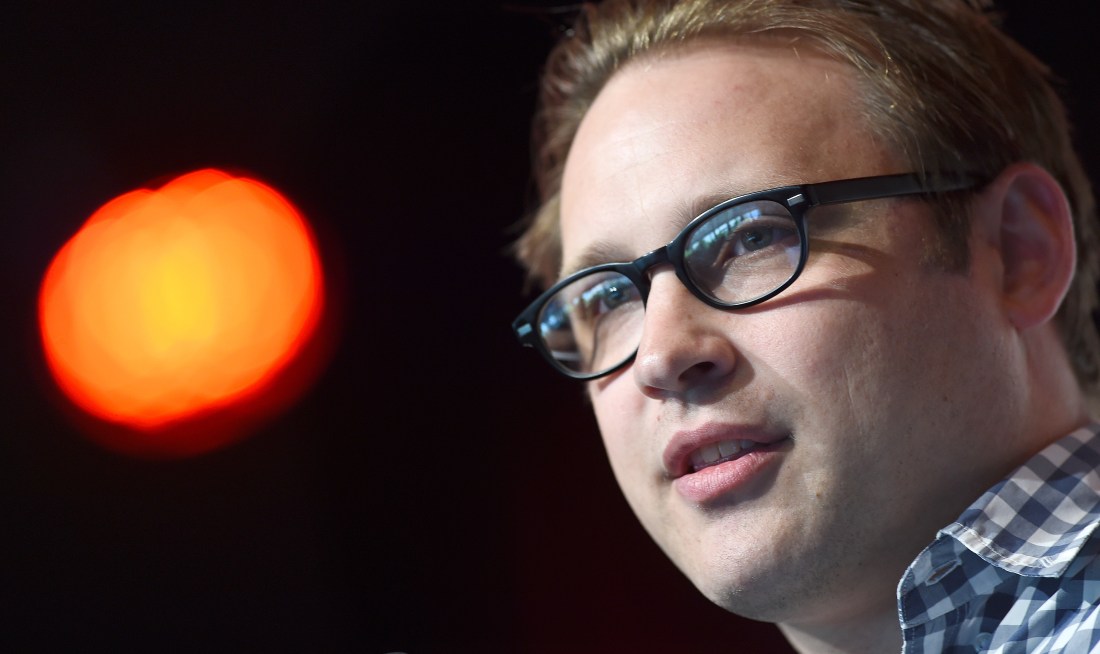 Rohrsheim looks on during an address to a CEDA luncheon. Photo: Dave Hunt, AAP

The frustration with SA’s reticence may be more acute for Rohrsheim who, despite a prolonged absence, is steeped in the state’s institutions. He was a St Peter’s College prefect, studied finance and engineering at Adelaide Uni, and even worked for a time at Steven Marshall’s infamous Wok In A Box business.

But then he went to Silicone Valley and “got re-wired”.

He said his time in the San Francisco Bay area’s high-tech hub taught him two important lessons: the optimism “that anything’s possible” and the realisation that “it’s okay to fail, which is not something I learnt in South Australia”.

“[In SA], I was taught how to get good grades; that that’s how you end up on stage and get awards and progress through your career making yourself happy,” he said.

“In San Francisco, that’s where I learned it’s more fun to try something different, and it’s okay if you fail.

I learnt it’s okay to fail, which is not something I learnt in SA

In October last year, Rohrsheim shared a table with Premier Jay Weatherill at InDaily’s SA Business Index luncheon; the following month, he joined Mullighan at a CEDA [Centre for Economic Development of Australia] Infrastructure event. But he emerged from neither encounter with much optimism. Uber’s private impression of the SA Government appears more influenced by the loaded rhetoric of the likes of Treasurer Tom Koutsantonis and ALP backbencher Tung Ngo.

On the service’s local PR launch in 2014, Koutsantonis called it “a very dangerous option… you don’t know who’s driving the car”. Two months ago, Ngo spoke passionately against ride-sharing regulation in parliament.

“Let me outline just some of the costs currently imposed on the taxi industry,” he said. 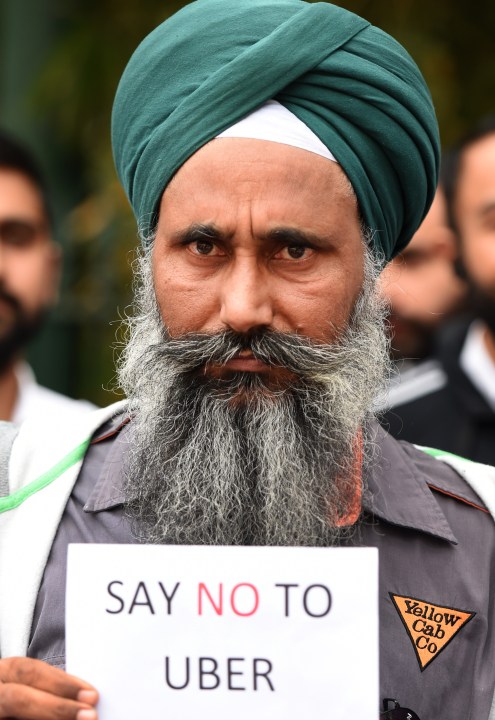 “In comparison, what are the costs of setting up UberX? Zero!”

He described the multinational parent company as “the big end of town”, and argued the state Liberals were “trying to destroy the taxi industry” by calling for its legalisation.

“Many of these [taxi] drivers and operators are students and migrants who are not afraid of hard work and not averse to competition… Why attack an industry that has served our community well for over half a century and has paid its fair share of taxes and charges?” Ngo said.

“How can we expect these people who have to pay all these government costs to then compete with one of the biggest companies in the world which refuses to pay anything? Let’s have an equal, regulated playing field.”

Why attack an industry that has served our community well for over half a century?

It’s fair to say Uber’s relationship with the State Government has been terse. Rohrsheim and Mullighan have traded barbs on radio, and on social media.

@SMullighan Meanwhile, we've created 15,000 jobs for other States in Australia. >5300 applicants in Adelaide are waiting for you.

@rohrsh And on your claim of "creating" 5,300 jobs in SA, will you be submitting your economic analysis verifying this to our review?

Mullighan concedes there are people in his party “who are strong advocates of the taxi industry, no question about that”.

“Just as obviously, the Liberal Party called on us to move before the review had even concluded and create that special environment just for Uber, instead of a fair and open opportunity for all people that might want to compete with those services,” he told InDaily.

“[But] I’m very, very deliberately remaining open-minded about this, and not giving any sort of clue on how the Government might move.

“I guess the position we’ve taken with this is we know there needs to be change to the taxi industry; there has to be reform, service standards have to improve and there are some elements which will change whether the industry or competitors like Uber like it or not.”

He said “for some reason Uber reacted very badly” to the Government’s review.

“I appreciate they’re impatient; as the Australian arm, I assume they’re getting a lot of heat from head office in the US to make sure they’re accessing markets as quickly as possible, but just because there’s a corporate pressure doesn’t mean we shouldn’t go through a rigorous process to make sure we end up with best possible regulatory environment.”

Nonetheless, he insisted risk minimisation would be at the forefront of any changes, and “we should be taking advantage of new technologies coming into the market”.

“We’re open to competition, but having said that we have to make sure we don’t just create a [regulatory] environment for a particular company.”

Mullighan argues Victoria, which like SA is yet to legalise ride sharing, was “ahead of the pack” with its own industry review.

“We think we need to go about this thoroughly and have an open opportunity for all people,” he said.

“To create a special environment for one company as opposed to another company is not how we should be going about regulating this industry… [but] it all depends on the recommendations and how the Government chooses to respond to them.”

But as far as SA is concerned, Rohrsheim, it seems, has lost that Silicone Valley optimism that “anything’s possible”.

“It just surprises me [in a state] where jobs are on the agenda,” he said of the Government’s approach.

“Ministers often tell you it’s a complex issue – it’s not a complex issue! It’s about protecting established operators; the taxi industry doesn’t accept new forms of competition… the Government is highly sensitive to the possibility of any job losses anywhere, and it holds them back from saying ‘yes’ to something new.” 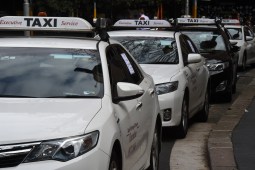 Lie to the taxi company - they lie to you

He argues, rather, that increased competition would be “great news” for taxi drivers, as it would “give them a choice, a bit of leverage against their boss”.

“Our ambition is to fix transport,” he said.

“We hope we can put in place good processes that mean more start-ups follow after us… if we can get rules in place around insurance, proper regulation and all these assets it will probably be great for other businesses; it’s about more than Uber; it’s about getting it right.”

He said if the Government legalised the business “this afternoon we’d be ready”.

“My message to the Premier is, I do think it would send a signal to entrepreneurs… we hear this expression ‘SA is open for business’; [regulating ride sharing] would be a great way to demonstrate it.”