The round-table between the council honchos and Bank SA’s new state emblem-inspired mascot, the “Piping Shrike”, was billed as “the First Ever ‘Heaps Good’ Summit”.

But according to the elected representatives, the first they twigged that it was also the lynchpin of the bank’s marketing campaign was when CEO Nick Reade turned up to add his two cents.

The seeds were sown when the bank anonymously took out an expensive, double page spread in the Advertiser, proclaiming the state needed “a right kick in the mall’s balls”.

Penned by “the Piping Shrike” in November last year, the open letter sprayed congratulations on “you stunning South Australians” whose gifts to the world included “floating a pie in a glistening sea of green peas”.

So enamoured was Lord Mayor Martin Haese with this avian mystery-man’s parochialism that he released his own open letter, inviting the apparently benevolent – and clearly cashed-up – state emblem to meet with himself and deputy Lord Mayor Houssam Abiad at Town Hall.

“It was in the paper, it was very mysterious; no one knew what it was about,” recalls Abiad.

“Martin ended up putting out a public notice or letter from his office that basically invited Piping Shrike to come in.

“He saw fit to understand what this person (the Piping Shrike) was trying to achieve and how we could cross-promote our city and state.

“I was invited to attend that meeting. We had no idea what it was all about, at all.”

What could go wrong?

“The bird was there, the cameras were rolling, that’s when I found out it was a Bank SA campaign,” Abiad says.

“I didn’t know I would be part of an advertising campaign.”

The interaction itself is wasted in print: you should watch the video below.

A council spokesperson tells InDaily that “at no time was the exercise of participating in the video intended to be an endorsement of any particular business, and it was done with a sense of fun and with good intentions”.

“The unbranded video and various social media posts provided the Lord Mayor and Deputy Lord Mayor with the opportunity to show that they’re also positive about the city and South Australia’s future.” 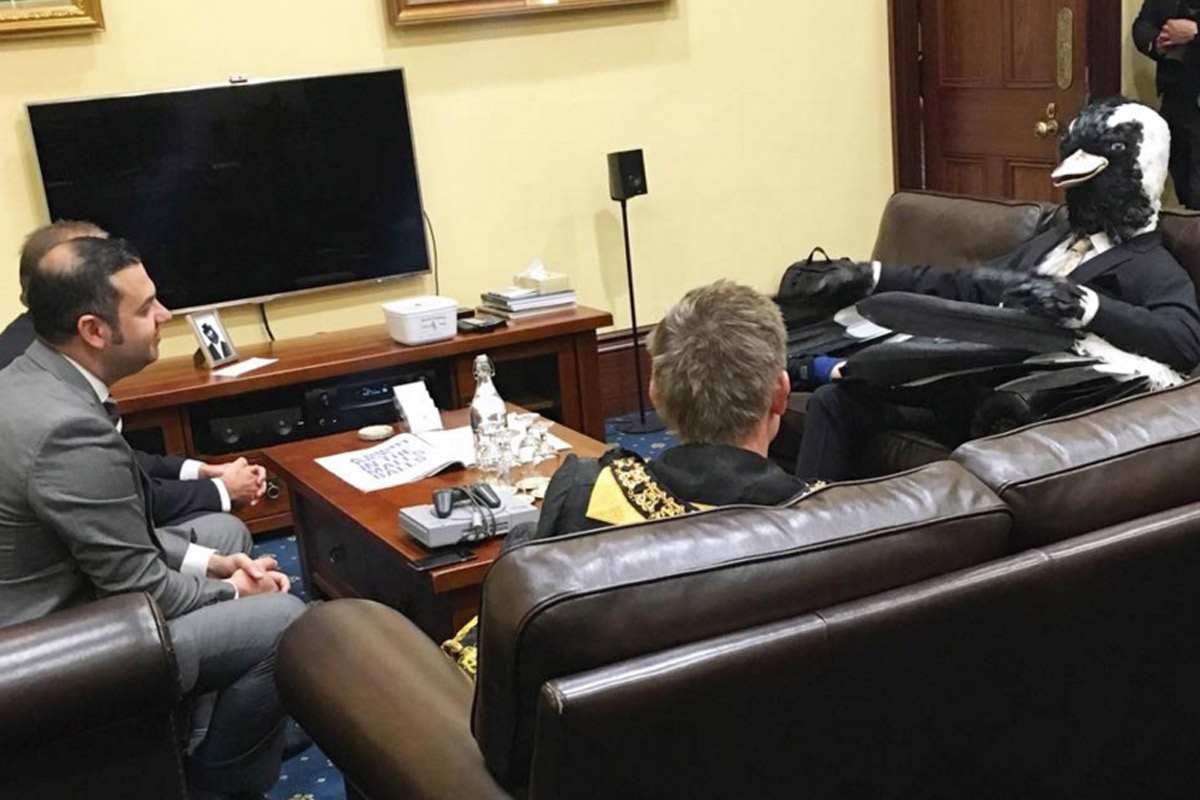 Haese agreed with the bird that all malls should have balls. “Shinier balls,” even.

The video, along with photographs of “Piping” with Haese and Abiad was, it appeared, Bank SA’s “big reveal”.

Haese has since tagged the bank mascot in a social media post showing him singing “No Penguin, No Cry” at the Paris United Nations Climate Conference, and the bird appears several times on the social media pages of both councillors.

But Abiad tells InDaily he felt no qualms when he discovered he had been unwittingly co-opted in the bank’s campaign.

He argues that promoting Adelaide businesses is part of the job of being a councillor – even if he did not know which business he was about to help promote when he agreed to the meeting.

“If we can do that by any means that are ethical and moral, where we are doing exactly that which is part of our remit, then we’re always prepared to do it.

“It’s not like I’ve been paid money for it.

“It was a very smart campaign.”

@iamshrike had to replace my wife @AvaAnastasia photo fran with yours! You are so good looking! pic.twitter.com/ZDbCsFzXjq

Despite the councillors’ support, however, the bank’s unorthodox campaign “never really took off”.

That’s according to the head of the School of Marketing at the University of South Australia, Larry Lockshin, who explains that “the whole point of any ad, publicity, whatever, is to get the brand name of the company … into people’s minds”.

“But did Bank SA get that out of this? I don’t see it.

“Looking at the (Piping Shrike) Facebook page, it’s not actually very many who seem to have liked it.”

Lockshin says that while campaigns intended to go “viral” using humour can sometimes be very effective, the brand has to be front-and-centre for the campaign to be worth commissioning.

“As a consumer, you really have to dig deep to even find out anything more than that the Piping Shrike might be related to Bank SA,” says Lockshin.

“But since they don’t mention Bank SA, at least initially, and they just kind of go around and do silly things, I mean, what’s the point?

“It may be refreshing the brand a little bit to (existing customers) but it’s certainly not bringing in a lot of new users.

“Maybe that’s what they were trying to do.

“I don’t even know what they were trying to do.”

Asked for comment, Bank SA told InDaily “I’ll flick this email on to the Piping Shrike, because he responds to his own media”.

“Piping Shrike has his own personality, and will do his own thing, independently of Bank SA.”

However, the spokesperson confirmed there was no fee for the councillors’ involvement in the campaign, and said the state emblem would continue his “positive campaign” to promote South Australia, and its businesses, including the bird’s “partner,” Bank SA.