He has the Golden Ticket.

The retail analyst narrowly missed out on a quota in his own right as Nick Xenophon’s running mate in 2013, when the independent senator’s ticket incredibly garnered almost a quarter of first preference votes, outpolling the Labor Party.

This time round, he will be the lead candidate for the recently-birthed Nick Xenophon Team, the party spawned by the enduring political popularity of a once-in-a-generation politician.

Griff is a prime mover in the fledgling organisation. Initially treasurer and secretary of the party, he is now campaign director, a powerful role charged with overseeing the process of selecting a raft of candidates nation-wide who will act as standard bearers of the Xenophon brand.

But he stands to wield even greater power in Canberra.

If even a proportion of the Xenophon vote holds up, as it should given recent polling and the fact the party leader will be free to campaign full-time in the cause, Griff will be elected with a quota and plenty of votes to spare.

But little is known about the man who appears poised to ride on Xenophon’s coat-tails into the Federal Parliament.

I’m not a political groupie by any means.

Griff tells InDaily his main intent is to support the idiosyncratic showman, a man who has long frustrated major parties just as he has enthralled the wider electorate (and certainly the press gallery), but whose legacy as a policymaker has been questioned.

“What I think it all comes down to, my motivation for being really involved with Nick is that you’ve got a man who’s an incredible advocate for the people and a very strong advocate for SA,” Griff explains.

“I don’t think you could name one other MP that’s so passionate about SA, but whilst he’s been incredibly effective with making public a lot of issues and highlighting very important things, he’s still only one vote in over 200 MPs.”

“Given his motivation for political life was to clamp down on poker machines, his achievements have been slim,” Kenny concluded.

“Often there’s the criticism about Nick and what’s he managed to change,” concedes Griff.

“Whilst he’s been able to bring important issues out in the public … to effect legislative change it’s important to have more MPs associated with him.”

Griff appears set to bolster Xenophon’s influence, but he may not be alone. The NXT party will run Upper House candidates in every state, up to eight lower house candidates in SA and a handful more around the country.

Selection has been an exhaustive process, and one in which Griff has played a pivotal role. For someone as yet without a seat, he is the NXT equivalent of Labor’s infamous faceless men.

“The management committee of the party consists of two people: Stirling Griff and Nick Xenophon,” he says.

“But ultimately it’s Nick (who decides). It’s Nick’s reputation on the line…it’s not mine, it’s his.” 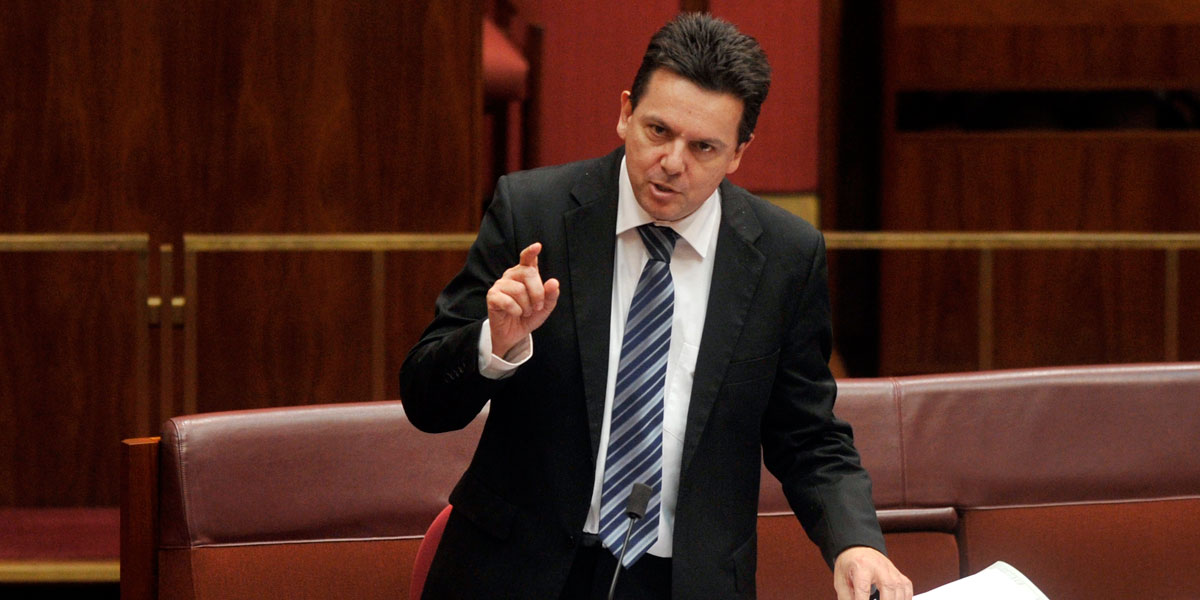 Nick Xenophon: “….to effect legislative change it’s important to have more MPs associated with him.”

Perhaps appropriately, the pair’s friendship dates back to one of the defining moments in recent SA political history.

“I’ve known Nick now for 17 or 18 years, going back to when he was first in the (state) Upper House,” recalls Griff.

“At the time I was running the Retail Traders Association… our first dealings were back in the ETSA privatisation days. My association was the only association that actually backed Nick, that didn’t want electricity assets deregulated… everyone else was full-on attacking him.”

In the end, under the weight of fierce pressure, Xenophon voted with the then-Olsen Government to allow the sale, but Griff says nonetheless “really from that point we’ve kept in touch”.

It was an intermittent relationship. Sometimes, Griff says, “you may not hear from him for a year”, at others “we’d meet 10 times in a week”.

It’s the appreciation that we’re all on a journey together… I’m not trying to sound spiritual.

Griff returned to running retail businesses, but later sold his interests. He found himself with more time on his hands and spare office space as Xenophon was gearing up to fight for re-election: “I was very happy to run 2013 election campaign…and it was really from that point that we became very heavily involved, I suppose.”

That involvement had its price: Xenophon became the target of a negative Labor campaign, predicated largely on Griff’s stance on penalty rates, which he had reportedly described as “a noose around the neck” of small business.

“The campaign that was run last election was just wrong, because the hundreds of thousands of robo-calls that were made featured a person purporting to be a nurse, saying she changes bedpans at 3am and she’ll lose her penalty rates.”

He argues the attack was misguided because penalty rates are ultimately the purview of FairWork Australia, and moreover “we certainly never ever said we’d take anything away from nurses or anyone in that category”.

“It all just came from a personal view that both Nick and I have that there are many small businesses that are not opening up on Sunday because they can’t afford to pay a junior $40 to $50 an hour,” he says.

“There’s no value for the employer … you wouldn’t be stupid enough to take it up, frankly.”

He says the aborted deal on penalty rates between the shopworkers union, which runs the powerful Labor Right faction in SA, and Business SA was “a silly agreement”, a “sweetheart deal” designed to help “both of those associations gain more members”.

But he says the penalty rates issue was “twisted” because the major parties “want to do anything they can to attack Nick”.

“It’s the appreciation that we’re all on a journey together,” he says.

“I’m not trying to sound spiritual … everyone has got something to offer, and we need to give people the tools.

“The thing that drives me is really positive community change … I’m not a negative person. I’m not a pessimist.”

He describes himself as a political “centrist”, to the right on issues affecting small business, but left-wing on social issues such as gay marriage.

“People are people,” he says.

“Marriage equality is not an issue for me, not at all.”

SA, he argues, has been “left on the side” of national debate, with an ageing population and a dearth of young talent.

“That’s what excites me: I’d like to help effect some of that positive change.”

Griff says he and Xenophon have endured and enjoyed “spirited discussion” as they pick their party team.

“I’m not a political groupie by any means … the reason I’m doing this is really to just make sure that we can effect some large change for the things that Nick stands for.”

His legacy, then, may be to grant Xenophon a policy legacy of his own.

“That sounds a very wanky kind of comment,” he adds, revealing again the distinct mix of idealism and pragmatism that has landed him with that Golden Ticket into the heart of Australian politics.