Local residents are up in arms and state and federal MPs have expressed concern about a Fleurieu council’s plan to sell off public land for residential development.

The fire-sale seems predicated in part on raising funds for a stalled upgrade of the Chiton Surf Life Saving Club, near Victor Harbor, which the State Government promised in January last year.

In January 2014, Premier Jay Weatherill announced a $1.2 million annual increase to the Surf Life Saving SA budget would “accelerate much-needed redevelopments of clubs including Chiton Rocks and Grange, with construction likely to start in late 2014”.

But the Chiton upgrade never eventuated. It’s understood Alexandrina Council wants to concurrently develop other facilities in Goolwa and Victor Harbor, and has been unable to stump up its share of the required funding for Chiton, believed to be about $1.2 million, a third of the total project cost.

It’s expecting to net around that much by selling off two of the remaining thoroughfares leading to the Chiton Beach seafront in Hayborough, which locals say will close off beach access and block the remaining sea views to all but a few residents.

Mayor Keith Parkes told InDaily those two sales may be just the start, with council considering “the idea of maybe looking at some of these other parcels of land, unmade roads or unused reserves”.

“The money for those could be used to put towards very badly needed infrastructure,” he said.

He said there were other pedestrian access points “in close proximity”, but a campaign committee of local residents argues otherwise, saying residents would be forced to walk up to a kilometre for alternative beach access.

And they’re gearing up for a fight: an online petition has already garnered well over 700 “signatories”, with public consultation on the plan only beginning last week.

The petition argues the sell-off will “lead inevitably to two-or three-storey private developments being built … creating wall-to-wall housing along the seafront”.

“Closing off the coastline in this viewless manner, making access very difficult by locals, in particular local children having access to a safe swimming area, is a retrograde step which does not consider community,” wrote one signatory, Margit Wright.

Another, David Michell, wrote: “There’s been enough development on the foreshore and we need to retain some of the original character.”

Resident Carla Artini wrote that her family “uses this piece of land to walk down to the beach”.

“My father is elderly and frail and has limited mobility these days…his one little pleasure is to walk across the road to the vacant land to view the sea,” she continued.

“Please don’t rob him of his one little pleasure of walking across the road and seeing the sea.”

It’s understood Federal Liberal MP for Mayo Jamie Briggs has expressed concern about the plan to Parkes, as has state MP for Finniss Michael Pengilly.

Pengilly told InDaily: “My view is I don’t oppose generally the sale of Crown Land but in situations like this, where it’s been a long-term public corridor and it’s close to the beachfront, I think it should stay as it is, personally.”

“I don’t want to put dollars before the public’s rights,” he said.

Pengilly last week inspected the site above Chiton rocks, and will lodge a formal objection with council during the month-long consultation.

Local landowner Rob Sangster, himself a long-serving councillor in the City of Unley, told InDaily: “There wouldn’t be a ratepayer along there that would say, ‘Yeah that’s a good idea’.”

He said the width of the allotments was “considerably less than the width of the other blocks around there”, which suggested any developments would likely be multi-storey, further impeding a vista long-enjoyed by locals in the popular holiday precinct.

“But the main objection is that local people and visitors won’t have access to the beach,” he said.

Landowner Daryl Teague, whose property is adjacent to one of the plots to be sold, said there was also concern about vehicle access for CFS and ambulance services.

“I think there’d be palpable discontent and disappointment if the council were to make this thoroughfare impassable,” he said.

Parkes said the council would consider feedback from the public consultation “and we’ll decide what the next step will be”.

“There are still several other access points to that foreshore area,” he said.

“It’s an option that we thought, ‘well, let’s put it to the community and see what they say’…If they come back overwhelmingly against it, we’ll listen to it.

“That’s what we’re here to do. We’ll get all the feedback to consider (and) should it be overwhelmingly against the idea of selling, then we won’t sell it – simple as that.” 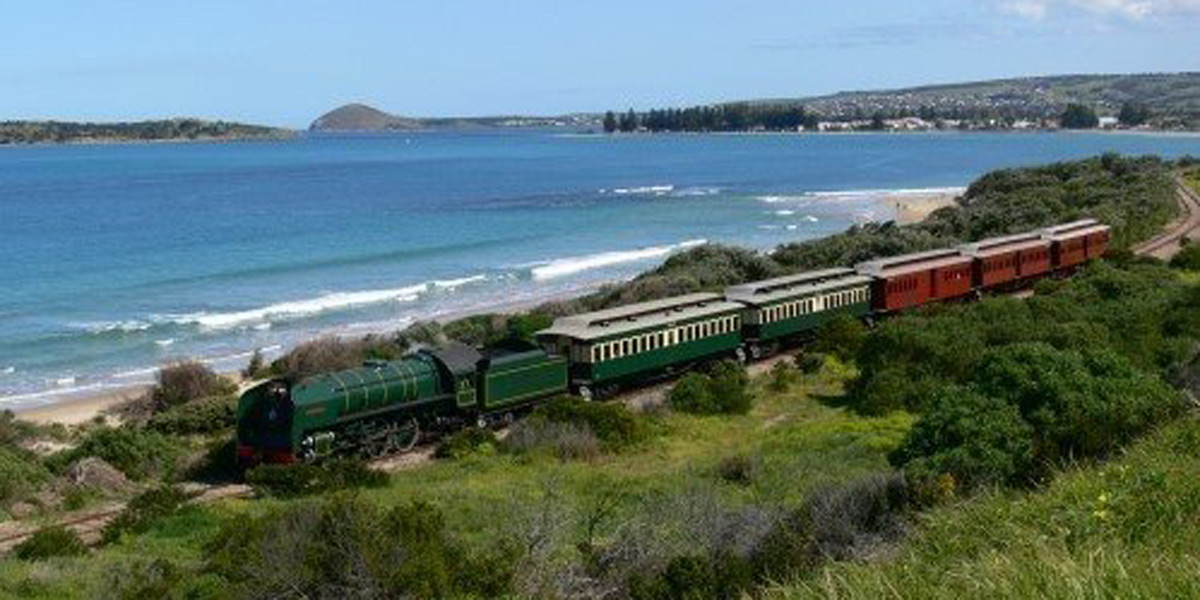 The view of the passing steam train from one of the allotments, published on the online petition.

Any sale must be ratified by Infrastructure Minister Stephen Mulligan, who said he would wait for the outcome of the consultation process “before considering any application to close the road”.

“In particular the views of the community, the emergency services and other interests such as community access and coastal conservation concerns will be considered,” he said.

Parkes said the council collected around $34 million each year in revenue, but that “we can only collect as much money as we need to operate”.

Aaron Lewis, president of the Chiton SLSC, said the club had applied for a federal grant to progress the long-awaited upgrade, but the success of the application would not be known until December, well after the council’s land-sale consultation.

“At this stage, we’re happy to sit on our hands and hope to get a good result from the federal grant,” he said.

The State Government’s funding would cover around 56 per cent of the revamp; if the council stumps up its 33 per cent, the club would be responsible for the remaining 11 per cent.

“This commitment remains unchanged,” he said.