Little Chloe Brown knows she’s going to America for something big – but this is a journey that could change the Adelaide six-year-old’s life, reports Genevieve Meegan.

Fuelled by hope for a better life for Chloe, her parents have set up “Chloe’s Time to Shine” in the hope of raising $100,000 to fund potentially life-changing surgery to combat her painful cerebral palsy.

Chloe is excited about going to St Louis in America in January with her twin sister Lily and little brother Ashton, 17 months. But this is no ordinary family holiday – this is a trip that could transform Chloe’s future.

The curly-haired six year old, who loves Frozen and Taylor Swift, was born with cerebral palsy after suffering a stroke in mum Jennie’s womb. Jennie suffered twin-to-twin transfusion syndrome when pregnant, where one baby takes nutrients from another, putting both babies at risk of death. A medical procedure to correct the condition resulted in Chloe’s stroke.

Today, Chloe uses a wheelchair and a walker to move about and she has limited speech. The happy, determined girl attends her local primary school, St Anthony’s Edwardstown, where she’s given near-celebrity status by her school mates. She loves swimming in the family pool and sitting on the inbuilt trampoline in the backyard and trying to keep up with Lily and Ashton.

Her grit shone through recently when Chloe took part in a pyjama walkathon at school, walking 18 laps around the oval with her walker – non-stop for 45 minutes. “She was exhausted at the end of it but she always gives things a go,” says Jennie. “We were incredibly proud.”

But as Chloe gets older, it is becoming more difficult for her to stay mobile without intense pain – her muscles are becoming stiff and limiting her movement. It’s painful and frustrating for the vivacious reception student, and a tough road for Jennie and husband Gareth, a medical salesman. 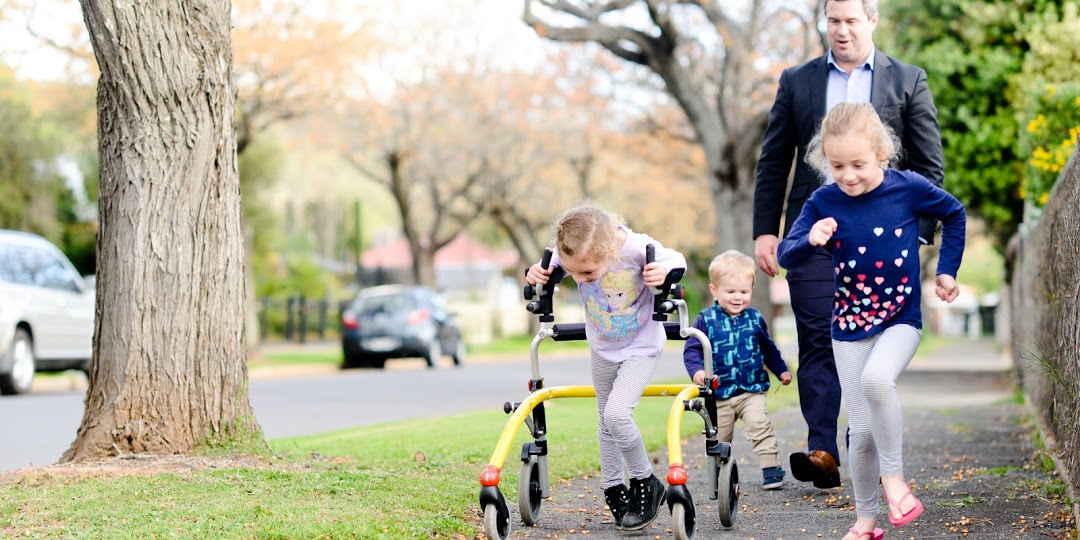 “She just has so much stiffness,” Jennie says, a trained physiotherapist. “It was so hard in the early days seeing Lily reach the milestones and Chloe being stuck behind.

“The down days still hit, especially as the complications from cerebral palsy become apparent. At the moment Chloe’s hips are starting to dislocate and that happens a lot because the spasticity pulls on the hip joint and pulls it out of its socket … it causes pain and we see that her legs are hurting her – they are the harder times now.

“Emotionally it’s hard – it’s harder for us to do things like certain outings – just if Chloe needs to go to the toilet, you need to have that planned ahead. We’ve tried to keep a normal life and we like riding our bikes and going to the beach.

“She’s always been a bright, happy little girl and really interactive, so she always wants to keep up and do what her sister is doing. She’s made steady progress and we’ve always looked for ways to help her through therapy and treatment. But we are now at the stage where she needs more help.”

The couple has worked hard to ensure Chloe has undergone the best therapy, including physiotherapy, speech and occupational therapy.

Faced with a life of pain for their daughter and limited hope of improvement, Jennie and Gareth made the difficult decision to apply for Chloe to undergo invasive spinal surgery in the United States. The procedure is called selective dorsal rhizotomy (SDR) and involves cutting some of the nerve fibres that go from the muscles to the spine.

“We heard about the surgery in America through people we know,” says Jennie. “There’s actually been seven other children from Adelaide go in the last few years.

“Since December last year four of Chloe’s friends have gone and we have been watching to see what the results have been like and considering it for Chloe and they have all come back and done really well. One of her really good friends Cooper went in March this year and he’s been doing amazingly well.

“So we got all the information we needed and sent it off to the doctor in America and we got a letter back saying he thought she’ d be a good candidate for the surgery – we were just amazed when we got the letter – we were stunned and then we had a decision to make.

“With any surgery for your child, you have to think about it because there are always risks and this is permanent, once it’s done there is no going back.” 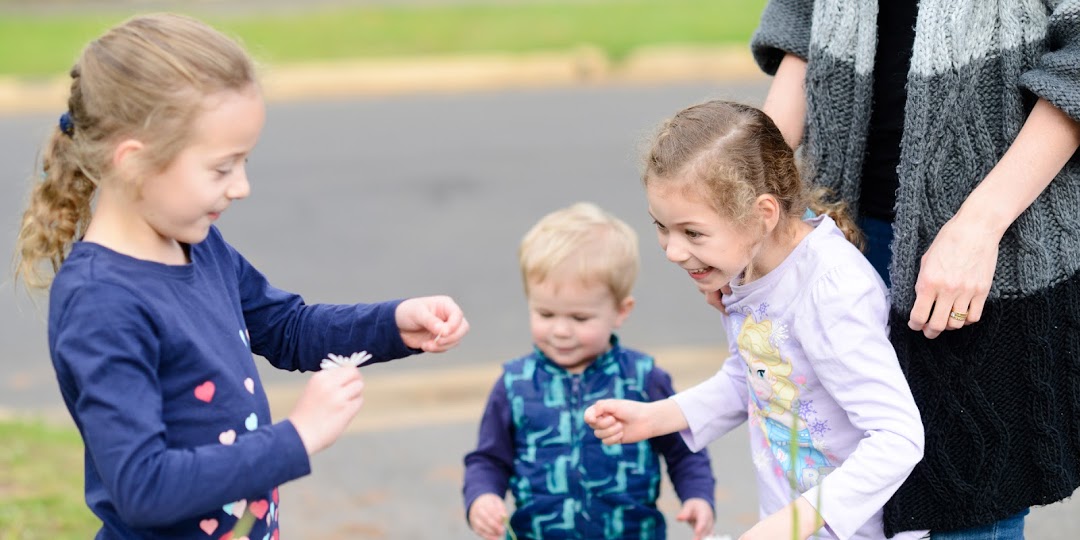 The couple has decided to go ahead with the surgery and plan to take their family to the States in January. Faced with the cost of $100,000 for surgery and expenses, Jennie took to social media and set up “It’s Chloe’s Time to Shine”.

“Once we made the decision to go we thought we’re going to have to fund raise and we thought about the power of social media,” she says. “So we thought let’s set this up on Facebook and see what happens.

“It was amazing – we didn’t think it would spread so quickly but people have been so generous, even strangers donating significant amounts of money. Someone donated $500 and we don’t know who that is. We’ve been blown away.”

The family also has the enormous support of their local and school communities and have held kids’ movie days and will hold a cocktail party on 6 November at the Glenelg Golf Club. To date they have raised $29,000, but they have a long way to go.

The community feeling around the fundraising effort was reflected recently when a young neighbour dropped off a handmade card that said: ”Here is my money – all of it – from Maisie. Good luck with your operation. I hope it helps you to walk.”

“It’s just been overwhelming,” Jennie says. “You just want to thank everyone personally. We still have a long way to go but it’s been incredible.

“Our aim is just to ensure Chloe is in less pain and has easier movement – we hope it will improve her balance and endurance with walking, as well. The doctor has said she may be able to walk using crutches.

“This operation represents hopes because with cerebral palsy you will see most improvements up until the age of six, so to have hope after that is just blowing us away.” 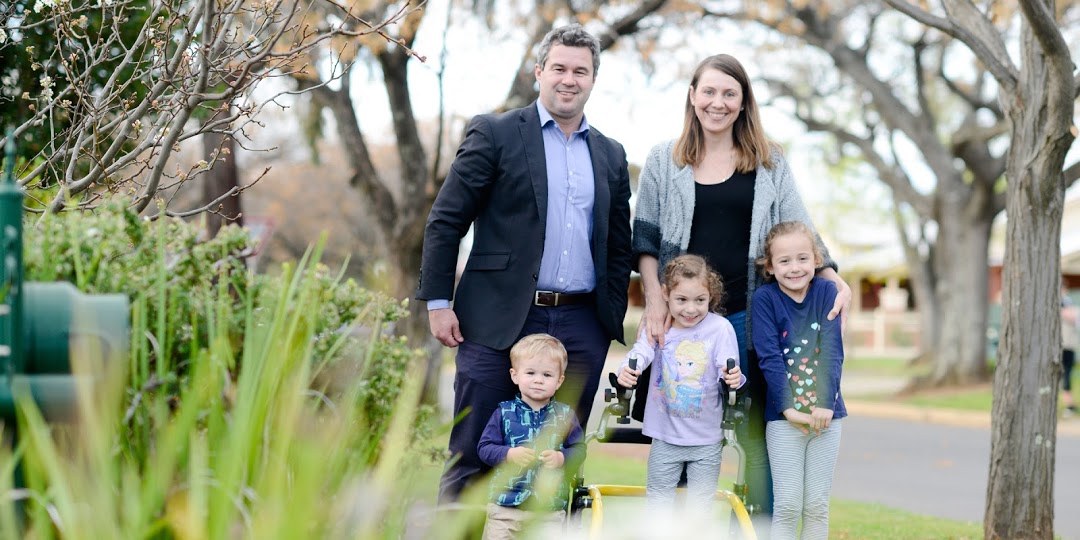 Gareth and Jenny Brown with Ashton, Chloe and Lily.

The girls sort of understand what’s going on with Chloe’s operation, says Jennie.

“Lily got a bit excited and said Chloe’s legs are going to work like mine, so we had to explain they won’t be 100 per cent, but hopefully she will be more comfortable – it’s not a cure but it will help.

“Chloe smiles and understands but with her verbal skills it’s difficult. She knows we are going on a holiday that will hopefully help her. No matter how much money we raise, we’ll get there, somehow. We really do believe it’s Chloe’s time to shine.”

For details about how to donate, go here.