The Liberals had seen their polling figures plummet in SA amid ongoing uncertainty about the fate of the contract that outgoing PM Tony Abbott once promised would see the fleet built at Adelaide’s ASC.

That pledge has since been adapted to an insistence that ASC could play a role in construction as part of a contract awarded to on offshore tenderer, with bids from Japan, Germany and France being assessed.

But Weatherill will today write to Turnbull demanding he immediately ditch any option that will see the submarines constructed overseas.

“They can keep their evaluation process, but rule out a hybrid build and an overseas build,” he told InDaily this morning.

“Tell the bidders to stop doing work on the other two options.”

He said reports the Government was considering reducing the buy from 12 vessels down to eight should also be quashed.

While Weatherill is conducting diplomacy from afar, Marshall is today jetting straight to Canberra to press the flesh with the new PM, underlining the Premier’s push for a guaranteed local build.

“That’s my position, it’s been the SA Liberal Party’s position, and I’ll be certainly advocating for that the minute I meet with him,” he said, his rhetoric suggesting he is upbeat about a positive look-in.

“I’ve always had a good working relationship with Malcolm Turnbull,” he told InDaily.

He said he also had a “very good personal working relationship with Tony Abbott”, who he labelled a “hard-working guy who made some difficult decisions”.

Marshall was frequently the political fall guy for those decisions, with tough talk on Holden and ASC’s shipbuilding capacity considered to have adversely affected the Liberal vote before last year’s general election and a key by-election in Fisher respectively.

“But the Federal Liberal partyroom has made a decision, now we’ll get on with doing what we have to,” he said.

It’s understood key moderate figures in SA swung their support behind the coup, among them Marshall confidantes Simon Birmingham and Christopher Pyne, who could be handed the defence portfolio in a bid to mend political bridges on procurement.

But Marshall insists: “I don’t really want to get into what happened in the federal party room.”

“My understanding is there was a reasonably broad movement in that direction (to Malcolm Turnbull), but it’s not something I’m privy to.”

Xenophon, whose plan to unveil local candidates in at least eight SA seats had rattled the Liberals, told InDaily it was “too early to say” what impact Turnbull’s ascension would have.

“It depends what policies change,” he said.

“South Australia can’t be taken for granted given recent events,” he said, noting a majority of its Liberal members “played a key role swinging behind Malcolm Turnbull, and clearly the issue of submarines was the crucial part of that”.

Weatherill insisted he wanted to work “co-operatively” with the new leader, praising his “exciting” advocacy for “revitalising deliberative democracy”.

“We’ve been trying to do something like that here,” he said, referring to his recent blueprint for ‘Reforming Democracy’.

“He also talked about people being able to see an economic future for themselves and their families…I think that’s a powerful point,” said Weatherill.

But he offered sympathy for Abbott personally, just a day after the ousted PM visited SA to announce a funding partnership for the Northern Connector motorway.

“I couldn’t be a more different politician than Tony Abbott, but on a human level I can’t help but think of him personally.” 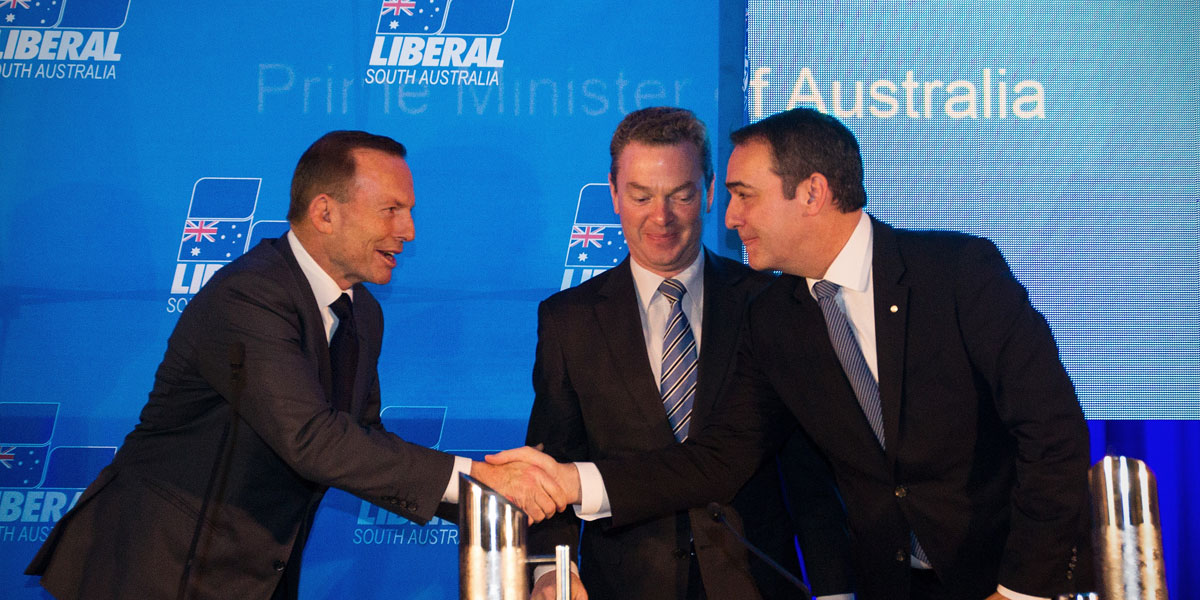 He said there had been no appreciation under Abbott of “the catastrophic decision to close the car industry”.

“The scale of the response has been pathetic,” he said, urging Turnbull to “revisit” his proposed automotive transformation package proposal.

He said “reasonable people can differ” on whether Holden had to close, but “you what you can’t argue is the effect that decision has on a particular region”.

“The Government’s inability to grapple with importance of sub decision in that context really leads people to the conclusion that you’re either deliberately turning your back on the southern states and SA in particular or you don’t understand what’s going on here,” he said.

“Moving to Malcolm just presents an opportunity for them to change their policy stance…if the Federal Coalition Government starts acting in SA’s interests that will have a direct impact on their standing.

“It’s a pretty basic business this one: you act in people’s interest and they vote for you, you act against it and they don’t.”

SA moderate Liberal senator Simon Birmingham suggested today he was confident a Turnbull prime ministership would lend itself to a local submarine build.

“He’s passionate about developing advanced manufacturing industries and those types of sectors that would benefit from an Australian submarine build,” he said.

“And that makes me incredibly positive and hopeful about where I think he would likely go on that issue.”

He said he trusted “Malcolm, like everybody, has learnt from the lessons of the past”, after his first foray as leader ended in failure.

“He, I think, is a man who has learnt through many different experiences in his life.”

Incumbent Defence Minister Kevin Andrews told Sky News today he was keen to continue in the role, but Birmingham said “frontbench positions are the gift of the leader”.

Fellow moderate MP Matt Williams, under siege in his marginal seat of Hindmarsh, told ABC radio: “I don’t disclose how I vote in the Party Room.”

Abbott once described Williams as his “favourite South Australian Liberal”, but his protégé would only say today that “we had our challenges in getting our message out there but we have a number of positive announcements for the Future Frigate program, patrol vessel subs…I’m looking forward to working with Malcolm to outline his plans for South Australia”.

However, conservative firebrand Cory Bernardi was scathing about the spill, telling FiveAA that “the South Australian branch of the Liberal Party has laboured under the self-interest of some Members of Parliament for far too long”.

“This is a very dangerous step forward in the history of disloyalty in the Liberal Party,” he said.

“There’s a history and a pattern of disloyalty…I don’t want to see disloyalty rewarded, but unfortunately on this occasion it has been.

“The same names continue to crop (up) – I’m not one of them, I’m a person who calls it as I see it (and) I’ll continue to advocate for the causes that I know our party reflects.”