That has the crossbencher poised to potentially catapult several candidates into the House of Representatives at next year’s federal election, as he today declared that “people have lost faith in the political process”.

InDaily understands the Liberals last month took soundings in three of their own seats, with the results sending an ominous warning that the Nick Xenophon Team (NXT) could snatch at least two of them on preferences.

The NXT, which has yet to even unveil its chosen candidates, is understood to be polling second – ahead of Labor – in Tony Pasin’s sprawling regional seat of Barker, which spreads across the state’s south-east and also takes in the Riverland and much of the Barossa Valley. It is also ahead of Labor in the Hills electorate of Mayo, which frontbencher Jamie Briggs holds by 12.5 per cent.

The Xenophon ticket is running third in Hindmarsh, where Labor’s candidate Steve Georganas has solid support as a former local member.

But it is the Labor Party that will be more rattled by the Liberals’ findings, with polling also taken in ALP-held seats that shows two high profile MPs facing a serious challenge. The NXT is running second on primaries in Adelaide, held by Kate Ellis on just 3.9 per cent, and Kingston, where Amanda Rishworth has a 9.7 per cent buffer.

Adelaide is considered a bellwether seat, while it’s likely Kingston was polled to test the water in an electorate where the incumbent garners around 50 per cent of the primary vote. A strong showing for Xenophon could instead see Rishworth bleeding votes to his candidate, raising the prospect of them charging into office on preferences.

The scenario will certainly see both parties vigorously targeting Xenophon and his candidates, who will run in at least eight of the state’s 11 seats – and possibly all of them.

The parties have not yet declared their preference allocations, but it would be highly unusual if Xenophon’s party were not preferenced above their respective major party opponent.

Xenophon played down the polls when contacted by InDaily, intimating that a mooted leadership challenge to the vulnerable Tony Abbott would completely change the dynamics of the election.

Nonetheless, he said, “if these polls are even half accurate, it shows the level of dissatisfaction in the electorate to be at an all-time high”.

“But if a week is a long time in politics, then the next few months with the Liberals’ leadership speculation is definitely an eternity,” he said.

Xenophon has run a concerted campaign against the Coalition over its perceived broken pledge to award the multi-billion Future Submarines contract to Adelaide-based ASC.

“People want to make sure the submarines are built here and that there’s a real plan to save tens of thousands of jobs that will be affected by the demise of manufacturing,” he said.

“People have lost faith in the political process to do the right thing and save these jobs.” 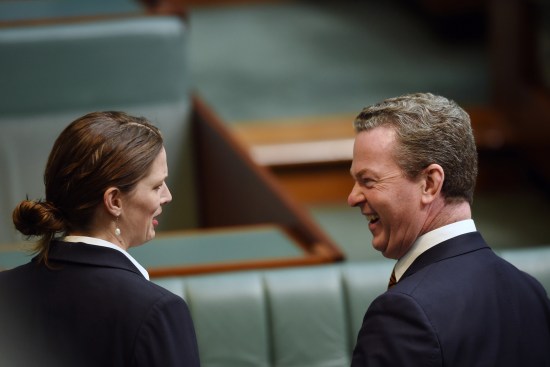 Kate Ellis and Christopher Pyne: Labor and Liberal incumbents alike would be nervous at the prospect of a three-way contest with the Xenophon Team.

ALP state secretary Reggie Martin said the fact Xenophon was not personally up for re-election, unless there is a double dissolution, would affect the integrity of the polling.

“When Nick Xenophon is on the ticket the vote for the Xenophon Team is twice as much as when he’s not,” he said.

“Any research done using the name ‘Nick Xenophon’ has a statistically significant impact on the polling.”

Martin said he was “confident that our sitting MPs will run a very good race and get re-elected”.

It’s understood the polling was conducted last month when the Coalition was at a low ebb in the wake of Speaker Bronwyn Bishop’s resignation over the Choppergate entitlements controversy.

Xenophon has flagged that he will unveil his chosen candidates in October or November.