Adelaide City Councillor Robert Simms has been chosen by the Greens to fill its Senate vacancy.

The Greens announced this morning that Simms will step into the seat of outgoing senator Penny Wright, who is retiring from the position, citing an illness in her family.

The area councillor’s election to the Senate clears the way for a possible push by former lord mayor Stephen Yarwood to return to the council.

There was intense speculation within Town Hall last month, also revealed by InDaily, that Yarwood may be interested in Simms’ position as a stepping stone to a second mayoral tilt.

Yarwood did not rule out running for the council spot but said he was focusing on his “urban futurist” consultancy business.

Simms said he would resign from his council position in the coming days, and thanked his electors.

“I look forward to continuing to advocate for the interests of the city of Adelaide at a national level,” he said.

Simms told reporters this morning: “I’ll be working very hard to advocate for the best interests of our state, and to stand up for progressive values”.

He said he was “horrified by the Abbott Government’s attacks on public health and education, the attacks on the most vulnerable in our community, and the attacks on the environment” and would advocate for green electricity generation in South Australia as a means to curb the state’s high unemployment rate.

“I’m keen to look at how we can build more jobs of the future in our state, and as part of that supporting renewable energy in South Australia is critical.”

Simms has formerly worked as an advisor to Hanson-Young and fellow Greens senator Scott Ludlam. 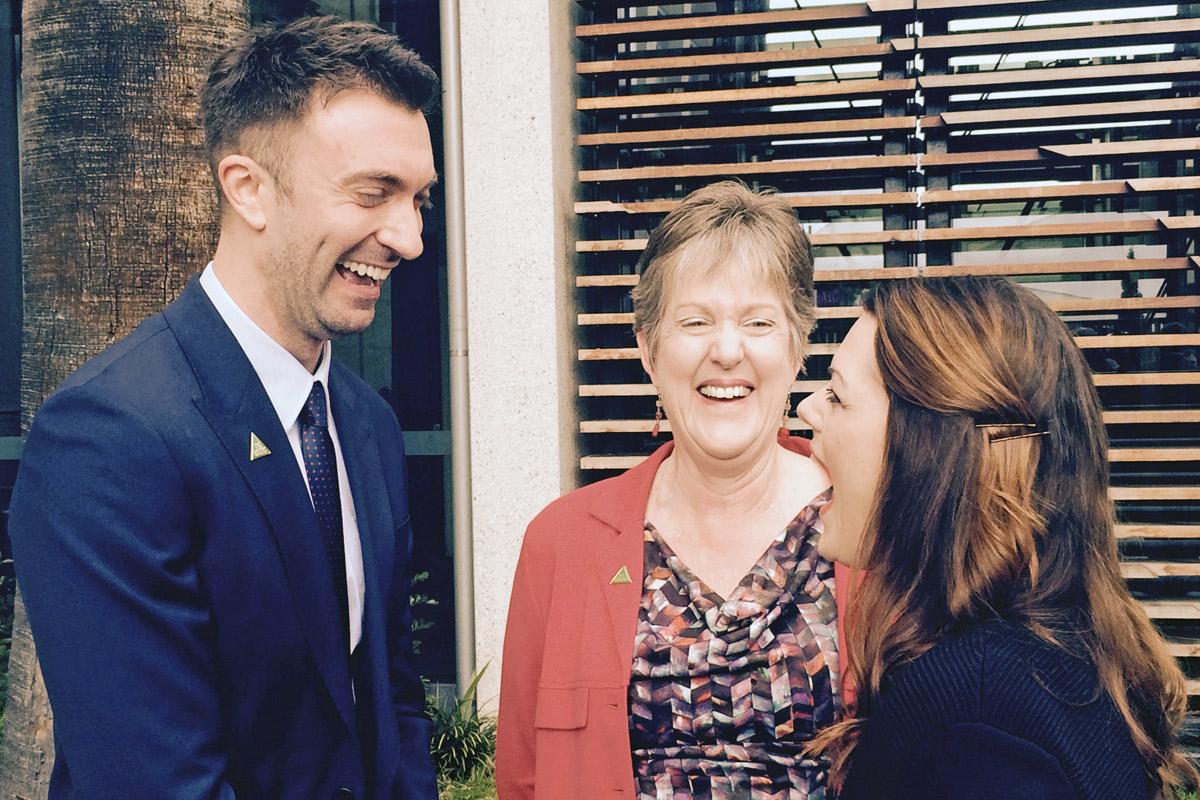 Simms has been an influential figure on Adelaide City Council since his election last year, advocating for a redoubling of the council’s green city agenda, the nascent food trucks industry, city “vibrancy”, and the Light Square rainbow walk – recognising Adelaide’s LGBT+ community.

Simms vehemently opposed the parklands dry zone, labelling it a “criminal justice response to a health issue”. He also opposed changes to the controversial Frome Street Bikeway and unsuccessfully pushed for a ban on circuses performing using exotic animals in the city.

“I don’t feel it’s as democratic as it could be.”

However, Wright told reporters this morning that she was comfortable with how the process unfolded.

“In terms of the process, I’m very comfortable with it, and I think we’ve ended up with an excellent representative for the Greens here in South Australia,” she said.

“Unfortunately there were some leaks, and I’m not sure why they occurred, and they were thoughtless whoever did the leaking.

“(However) it’s a serious decision that’s been made when you are allowing a person to step straight into a casual vacancy.

“It means that they won’t necessarily face an election for up to two years, so it was absolutely important that, in putting forward candidates, we knew that they were capable of carrying out the position.

“It was a totally democratic process, and all the way through, the party and its delegates had the opportunity to have input into the process.”

Despite his label as on the document as the “highly recommended” candidate, Simms told reporters this morning “there was no how-to-vote card, but the party has often done interview reports (and) that’s entirely appropriate”.

“In some of the political parties, it’s a faceless man or a faction that makes the decision; in the Greens it’s the rank and file members of our party, and I think that’s a great thing.”

However, he said, “I don’t want to get drawn into commenting on internal party processes today, that’s a matter for the party”.

Simms was given a glowing report card by the Senate candidate interview panel.

“Robert’s combination of experience, vision and political skills are an asset to the SA Greens, and the panel considers that he would make an excellent Senator,” the document reads.

Simms had “unifying strengths, being able to rally people around a project or campaign in a strategically beneficial way”, “excellent communication and interpersonal skills”, “strong personal values”, “professionalism, good humour and resilience”.

He was “a charismatic public speaker who is able to balance humour and incisiveness” with “a wealth of parliamentary experience”, “the ability to develop high-quality interpersonal relationships”, “a working knowledge of senate procedure” and “high intellectual capacity for complex policy work”.

“Robert says the power of politics to change lives for the better is his reason for nominating,” the report gushes, and “the panel believes Robert would discharge this responsibility very effectively in federal parliament”.

“Robert has the capacity to articulate the Greens philosophy and vision.”

“In his work as an elected Councillor on Adelaide City Council, Robert has pursued a strongly progressive agenda, speaking out on issues including animal welfare, environmental sustainability, best practice urban planning and social justice.

“Even in adversarial or challenging circumstances, Robert has demonstrated he is able to maintain a warm, respectful manner and maintain good relationships.

“The interview panel highly recommends Robert Simms for the role of Senator.”

Wright said she would be officially submitting her resignation next Friday.