Adelaide has won the right to host an extraordinary gathering of young international leaders pushing the boundaries of scientific possibility.

More than 1000 world-leading researchers from Europe, Asia and around Australia, all under the age of 40, will descend on Adelaide to advance and discuss technology and materials to underpin future products that might be considered science fiction today.

InDaily can reveal that the International Conference of Young Researchers of Advanced Materials (ICYRAM) will bring the world’s top young researchers in advanced materials field to the city in October 2018.

“When you think material science you can think of all the new types of products that are coming out, so: how do you make flexible electronics … or new types of biomedical devices, through to some of the types of new materials that allow the Airbus A380 (aeroplane) to get off the ground.

“Everything from materials that are only one atom thick – so something like … graphene, which is a single layer of carbon atoms – through to rather large things such as composite plastics, or light-weight metals.

“And in the biomedical space, being able to take a sample (of human tissue) then you can go off and look at the cells and then train those cells to go back into your body and attack a cancer.

“It the future, it’ll be a T-shirt, that you will put on, that will have as much computing technology as your standard laptop.

“Almost definitely, the initial conversations that are had at this conference will lead to future products (such as these).”

Biomaterials, health, engineering and structural materials, and materials for energy generation, storage and harvesting will be among the key themes of the conference.

“The legacy I’d like to see from this conference is … to form international partnerships between the world-leading researchers and industry based in Adelaide,” said Evans.

“… to not just have another academic conference, but to create a networking opportunity for young, world-leading researchers to engage with each other and industry.

“This is the first time this conference has come to Australia. It would be in the top five materials conferences on the planet.”

Evans said the conference would also help arrest the continuing decline of school and university students choosing science and engineering as a career path in Australia.

“Year on year, the numbers seem to be getting smaller and smaller,” he said.

“While we’re targeting future leaders, it’s also an opportunity to target those people that haven’t even considered what their future might be.

“There are actually jobs in (science and engineering).”

“This conference will have the flow-on benefits of encouraging more students to consider careers in materials science and other science, technology, engineering and mathematics-related fields,” she said. 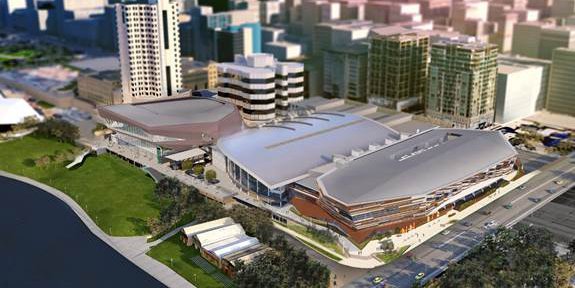 An artist’s rendering of the planned upgrades to the Convention Centre, which are underway.

“The $400 million expansion of the Centre has been a key factor in attracting ICRAM to Adelaide,” said Gilbert.

“The event is scheduled to utilise the Centre’s new East Building Plenary facilities.”

The upgraded facilities are due to be opened in 2017.