A new military law unit at the University of Adelaide has kicked off its work this morning, with the looming threat of autonomous weapons systems high on its agenda.

The Research Unit on Military Law and Ethics was launched last night and hosted its first seminar today, with state Defence Industries Minister Martin Hamilton-Smith raising questions about grey areas in military law, including drones, and the potential development of robot soldiers.

In front of an audience at the University of Adelaide law school, including high-ranking Australian military figures, Hamilton-Smith said the legal and ethical considerations facing the military were becoming more complex.

“Who is responsible when the software in a UAV (unmanned aerial vehicle) is hacked and the weapon turned on the innocent,” he asked. “Where is the line? Who is defined as the person who crossed it? And let’s go another step and remove the person: what happens when the soldier is a robot? These are the contemporary challenges for military law and ethics.” 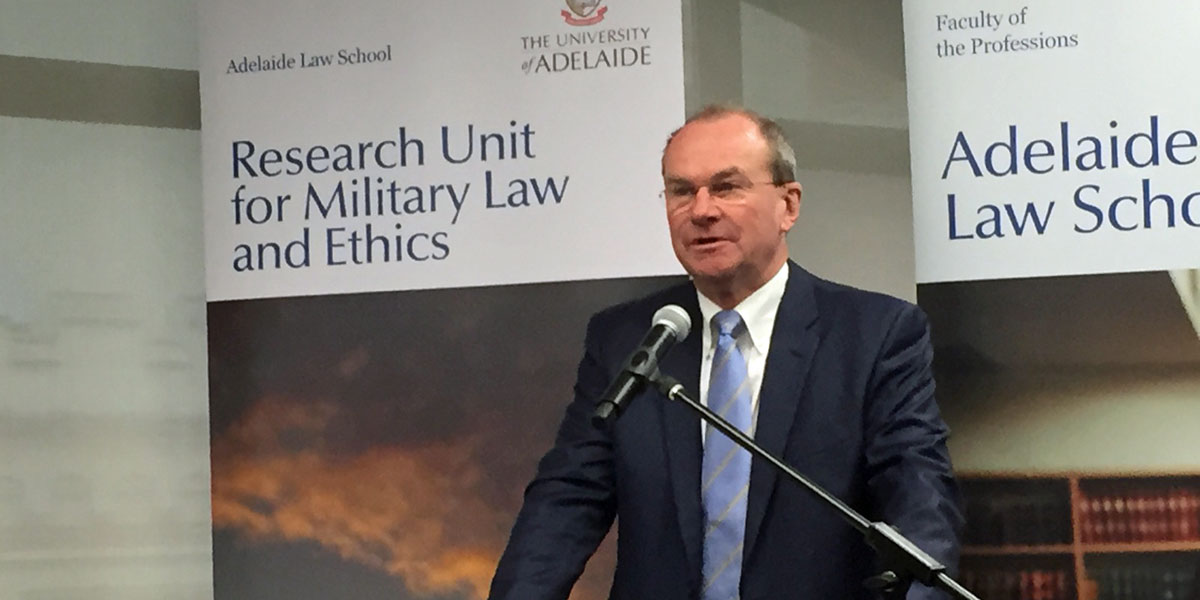 The head of the research unit, Associate Professor Dale Stephens, also believes that autonomous weapon systems will become a reality.

“Countries don’t have autonomous weapons systems yet, but I don’t think it’s too far away,” he told InDaily.

The international debate includes many who believe “robot” weapons should be banned – while others believe they can be designed to comply with military law.

“I’m doubtful whether they can apply the law of armed conflict,” Stephens said. “It’s something we will certainly be examining (in the unit).”

The threat of robot weaponry isn’t some sort of science fiction joke.

In April this year, the United Nations hosted a second meeting of experts in Geneva on what it calls “Lethal Autonomous Weapons Systems”.

An International Committee for Robot Arms Control has been formed which is pushing for a pre-emptive ban on the weaponry before it becomes a widespread reality.

Stephens, formerly an Australian Navy lawyer for 20 years, said there were more legal and ethical issues facing the military now than at any other time in history.

He said that during his time in the military there was a lot of focus on legal compliance of the armed forces, but less attention on moral and ethical considerations about when it’s right to apply force. The war in Afghanistan, and the rise of counter-terrorism and counter-insurgency operations, had started to focus attention on this issue.

“Just because it may be lawful to kill an enemy doesn’t necessarily mean that it is the best strategy for a long-term outcome in a conflict,” he said. “Such issues might appear contrary to traditional forms of military operations but they are becoming increasingly more important as the nature of conflict changes.”

The research unit will also examine issues such as the military uses of space, maritime disputes, and the human rights implications of using surveillance and metadata for security purposes.