The creators of the Olympic cauldrons at the Sydney, London and Athens Games and contributors to many other major sporting events made a similar proposal for the Melbourne Docklands riverbank earlier this year.

“The Adelaide Riverbank and the Docklands in Melbourne have striking similarities in many regards,” FCT Flames general manager of business development Mark Ryan said.

“They are both situated on a body of water and have a plethora of dining areas and coffee shops and they would both benefit from a draw card – or ‘wow’ factor – to pull people to the area. In fact both areas have under gone significant development, and yet both suffer from depressed hospitality and visitation numbers.

“Our proposal includes a combination of water, fire, lasers, light and sound to create an amazing fountain show.

“It would be an Australian first and would be fantastic to showcase a South Australian icon company like FCT Flames in our own backyard.” 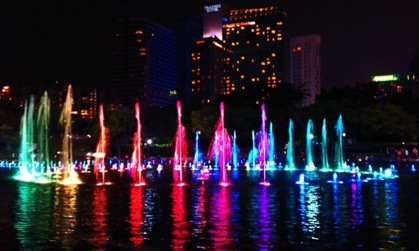 Another example of FCT Flames’ work.

He said the display would not interfere with water or pedestrian traffic in the public space and, although there are a myriad of designs that would benefit the river and its surrounds, one located in front of Pinky Flat might provide the best effect.

“What we have presented to the Riverbank Authority is a vision that would invigore the riverbank area and also work as a draw card to interstate and overseas visitors, enticing people to the area.

“The financial and economic benefits for businesses in the area would be significant. We estimate it could help stimulate more than a $100 million to the precinct annually.”

Riverbank Authority chair Andrew McEvoy said creating a sound and light water installation was one of the possibilities for activity along the riverfront.

“It will be crucial for drawing more people into the precinct,’’ he said.

“We also agree an installation of this kind will help to ensure the riverfront is being activated at all times, especially in between large scale events such as AFL football matches, cricket and large conventions.

“Last week the authority published a strategic vision for the Riverbank precinct which includes an investigation of a water and light attraction, with possible installation to follow in 2016.”

Ryan said the one off capital cost of the fire, water and laser showers would be around $20 million.

“Singapore tourism benefits heavily from the Dancing Crane show in Sentosa Island. Bellagio fountains in Las Vegas are one of the major attractions and the fountains in Dubai attract 47 million visitors a year,’’ he said.

“Musical fountain shows are proven crowd pullers and they deliver a real entertainment value to the visitors.

“We have given several proposals to the Riverbank authorities relating to different versions of a premium show and suggest that it is exactly what Adelaide needs to increase visitation to the river.’’

This is an edited version of an article that was first published at The Lead South Australia.