That magic was evident the moment Voxiebox co-inventors Will Tamblyn and Gavin Smith first laid eyes on their creation – a holographic volume of light, floating in the darkness.

“It really was magical,” Smith says. “One of the first things we displayed was a little T-Rex dinosaur. It wasn’t an image of a dinosaur; it was an actual dinosaur. You could walk around it and see it from every angle. It was a model made out of light.”

Smith and Tamblyn are two parts of VOXON, a company that reaches from South Australia to Silicon Valley. Their invention is the Voxiebox – a swept-surface volumetric display.

In other words, a 3D hologram viewable from all sides without any glasses, headsets or other equipment required.

“Will and I used to have Thursday night lab sessions. We’d hang out in the back shed, drink beer and make stuff. We did lathing, built CNC machines, we took things apart and built them into other things,” Smith explains.

“One night we’d had a few beers and were inspired to build a robot with a holographic projector for a head, inspired by Star Wars and the Princess Leia holograms. We were just having a laugh. We didn’t think it would be possible, because if it was, these things would be everywhere already.”

Their early experiments were typical back shed inventions, using whatever the two could find lying around. The first attempt used an old Nokia phone, shaken up and down rapidly on the piston of a lawn mower engine block, manually cranked by an electric drill.

It created a cube of light in the dark shed. It was the first step on the journey to a fully-realised, volumetric 3D hologram.

Smith and Tamblyn eventually had a working prototype – but their excitement faded.

Around three years ago they came across a YouTube video of almost identical technology in the United States. The demo was even similar – a woolly mammoth rather than their dinosaur.

They rushed out a crowdfunding campaign in an attempt to beat the American team to the punch, but their prototype wasn’t mature enough and funding failed. The campaign had an unexpected consequence, though: the US team noticed their efforts and proposed a merger.

“It seemed like a sensible thing. We weren’t trying to create the Betamax – VHS format war.”

They took on the existing company name, VOXON, and merged their prototypes into the Voxiebox. The team is split between Adelaide, where Smith and Tamblyn work out of the Tonsley advanced manufacturing precinct, San Francisco, where their CEO Sandira Calviac is based, New York and Rhode Island.

Each member of the team is multi-disciplined. Most members wear multiple hats, from business development to engineering and manufacture design. Ken Silverman is a recent addition, famous for his work in programming the Build graphics engine used by classic games such as Duke Nukem 3D and Shadow Warrior.

“The immediacy of the device is one of the key driving points. You can plonk it on a table in a meeting, or a school or an airport. People gather around it. You get a shared social experience, like playing a board game or the old table-top arcade games in bars,” Smith says.

VOXON’s device currently has a resolution of around 1000 on the X plane, 1000 on the Y plane and 200 on the vertical Z plane. It isn’t measured in pixels, but voxels – volumetric pixels, essentially cubes of light.

“The whole sci-fi angle is good for us. It’s the future you’ve imagined.”

Voxiebox works by rapidly moving a flat screen up and down. An extremely fast projector projects ‘slices’ of light on to the screen as it moves. When it’s moving fast, the screen blurs itself into nothing and a fully animated volume of light remains, made up of the slices of light.

“The more resolution you have on the Z plane, the more detailed objects you can display. So the faster we can make the project refresh rates, the more slices of vertical resolution we can have.” 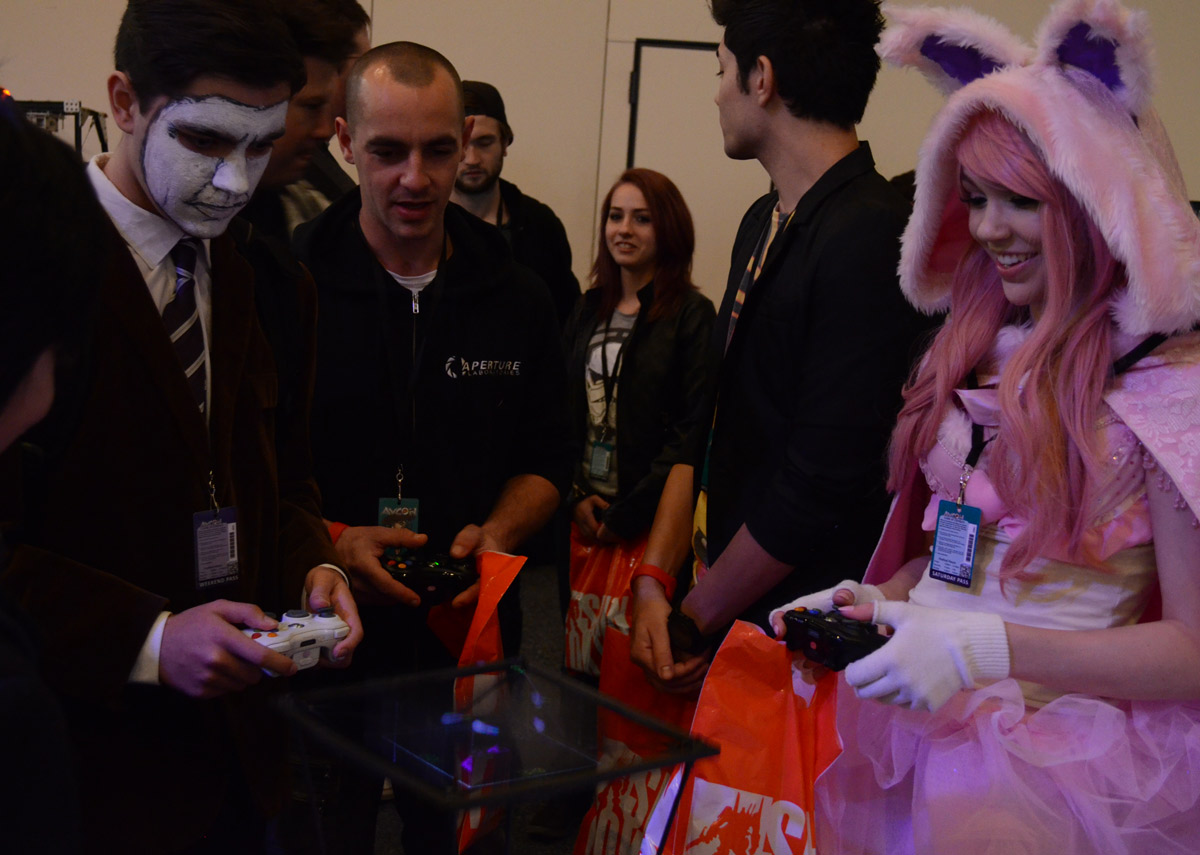 Crowds gaming on the Voxiebox at Avcon 2015 in Adelaide.

“In the last year our company has done demos across America and Australia. We’ve demoed to NASA, SpaceX, Tesla Motors, Intel, Palmer Lucky from Oculus Rift; even Steve Wozniak had a look at the device when it was displayed last year at a trade show.

“A lot of people ask, ‘What can you use it for?’ because it’s completely different to anything else. It’s not a predefined view like 3D movies. Nobody needs to prepare themselves to use it with 3D glasses or a headset.”

The team has already ported over classics like Pac Man and more recent indie hits like Voxatron. The Voxiebox strips gaming back to its core values, but adds some new potential too – gameplay that exists in the vertical plane, things that look different from every angle.

“Games from the 80s can be written for the Voxiebox by a single person in a couple of days. There are thousands of those. The size suits itself to things like soccer too – a long, wide field with players that are maybe five centimetres tall.”

They’ve taken the Voxiebox to schools, explaining difficult concepts like four dimensional hypercubes. NASA has used it to project 3D models of asteroids. There’s potential to display 3D medical data – scans of organs and bones, and even block out light to create slices of data like an MRI.

VOXON is currently searching for venture capital funding to develop a commercial product. They recently received a $50,000 Venture Catalyst grant from the University of South Australia and the South Australian government.

Smith and Tamblyn have recently graduated from Venture Dorm at Flinders University’s New Venture Institute in Tonsley, giving them access to advanced manufacturing technology, which Smith says has ‘revolutionised’ their design and build process.

“This building is a dream come true for any aspiring inventor. It’s your Iron Man Headquarters and Batcave all in one. We’re getting our feet here, meeting intelligent people, learning about materials science, nanotechn, 3D printing, lasercutting. We can use this place to make the best prototypes possible.”

Prototypes are currently in the hands of early adopters to get feedback on the device and its capabilities.

“The whole sci-fi angle is good for us. It’s the future you’ve imagined. It’s the type of display that crops up in movies like Avatar, Minority Report and Star Wars. And, you know, what we’re doing here, it’s just the tip of the iceberg on what’s possible.

“There’s lots of technology like virtual reality, magic leap and augmented reality that are moving towards the immersive end of the spectrum. These are all incredible. But we’re going in the other direction – not immersive, but social, standalone devices.

“It’s futuristic but on a different end of the spectrum. It’s using 3D data in a different way. 3D data has been trapped in 2D screens – but now you can see things, experience things in a way you couldn’t before.”