Driverless cars will be tested on Adelaide roads later this year, in an historic first Australian trial.

Premier Jay Weatherill today announced the trial would take place on the Southern Expressway over two days on 7-8 November.

Multiple driverless Volvo vehicles will take to the expressway to test manoeuvres such as overtaking, lane changing, emergency braking and using the on and off ramps.

The nation’s first on-road trial of the technology will coincide with an international conference on driverless cars to be held in Adelaide.

At the opening of the new Parliament early this year, the State Government announced that driverless vehicles were on its agenda for the coming term. InDaily revealed the Government announcement came a short time after Transport Minister Stephen Mullighan visited Google’s research facility in California, where he was impressed by the company’s progress in driverless technology.

The Government has also flagged a review of the state’s transport legislation to accommodate driverless and semi-autonomous vehicles.

Today, Weatherill announced the trials in Adelaide would involve vehicles from Swedish motoring giant Volvo, with testing to be undertaken in conjunction with Flinders University, Carnegie Mellon University, the RAA and Adelaide technology company Cohda Wireless. 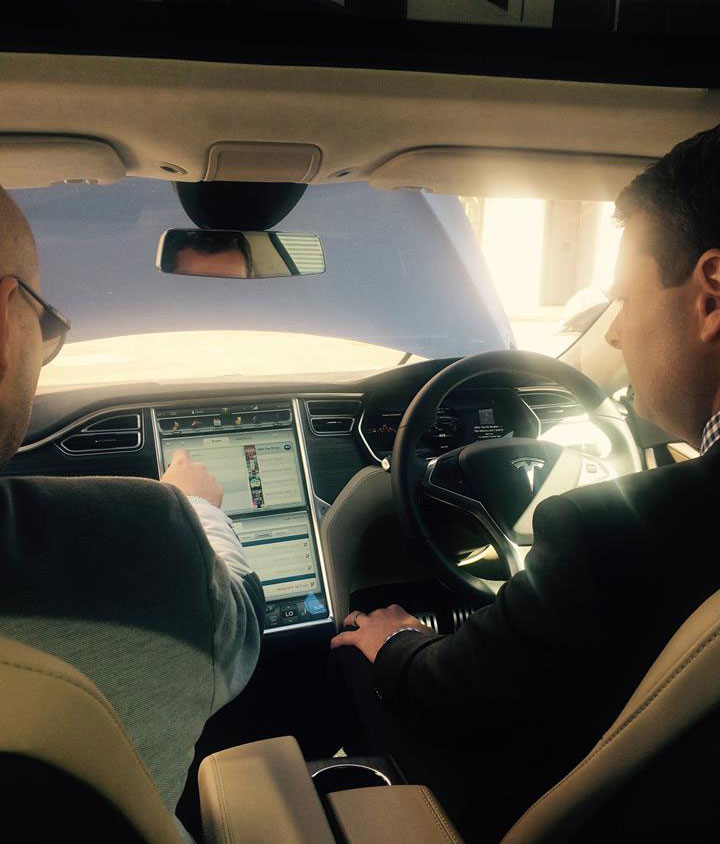 Transport Minister Stephen Mullighan in a Tesla car, with the capacity to drive autonomously. Supplied image

Weatherill said South Australia had the opportunity to become a key player in the emerging industry.

“This trial presents a fantastic opportunity for South Australia to take a lead nationally and internationally in the development of this new technology and open up new opportunities for our economy,” he said.

“It’s predicted that within just 15 years, the international driverless car industry will be worth $90 billion, so we want to encourage other global businesses to come to South Australia to develop and test their technologies.

“Driverless cars have the ability to revolutionise transport in this country and we want to be at the forefront of that paradigm shift. It is our ambition to be a test bed for innovation across a whole range of areas such as this.”

ARRB managing driector Gerald Walton said the trial would involve Australian and international experts in the field, and private sector companies including Telstra and Bosch.

He was also searching for more industry partners.

“Automated vehicles are far from science fiction, but rather a short-term reality that Australia needs to prepared for,” he said.

ARRB says the Adelaide trials will be the first of many across Australia, with discussions underway with a number of jurisdictions.

The RAA’s general manager of public affairs, Penny Gale, said that by 2020 all cars that come off the production line will have some ability to drive themselves.

“This trial will help us gauge the opportunities and issues road users might face, and help us better prepare our members for the future of transport that is rapidly approaching,” she said.

Supporters of driverless cars argue the technology will transform road safety, by eliminating human error on the roads.

Gale said the tech would also benefit those people who can’t drive – such as people with disabilities or the elderly.