Traffic on Frome Street has reduced markedly since the construction of the street’s controversial separated bikeway, a long-awaited review of the project has found.

Adelaide City Council resolved to commission an independent evaluation of the project in May last year amid claims that the separated bikeway would increase congestion on Frome Street because it reduced it to one driving lane each way.

During his successful election campaign to unseat then-Lord Mayor Stephen Yarwood, Martin Haese expressed concerns that the bikeway may have a negative impact on businesses along the street and pose a possible safety risk to cyclists.

Other groups, including the RAA, warned that the project was “bound” to cause increased congestion.

However, the review found there had been a 20 per cent reduction in weekday traffic on Frome Street since the bikeway was installed, and a small reduction in travel time along the road for cars.

Travel time on adjacent roads, Hutt Street and Pulteney Street, also reduced slightly since the completion of the project.

The report found that business trade, property prices and the street’s amenity had not been affected by the project, and that there had been a 23 per cent increase in cyclists using the bikeway since the concrete barriers and car parks were installed.

However, it also found there were legitimate safety concerns for cyclists because of confusion about the right of way at traffic lights and a failure by drivers to look left before turning.

Four injuries to cyclists have been reported to police since the bikeway was constructed.

According to the report, there has been “a significant decrease in motorist volumes along Frome Street” since the separated bikeway was introduced.

The average travel time for cars along Frome Street (where the separated bikeway is, from Carrington Street to Pirie Street) was slightly faster after the bikeway was introduced than beforehand.

The average travel time was 135 seconds before the bikeway was introduced and 129 seconds afterwards.

A reproduced table from the report shows a slight decrease in motor vehicle travel times since the construction of the bikeway.

“A significant proportion of survey respondents and focus group participants noted that traffic flow had improved since the introduction of the bikeway,” the report says.

There was no indication that reduced traffic on Frome Street had caused in any increase in traffic on adjacent routes.

Counts of car numbers on Pultney and Hutt Streets – which run parallel to Frome Street on either side – showed a reduction in traffic volumes of between two and four per cent since the bikeway was installed. 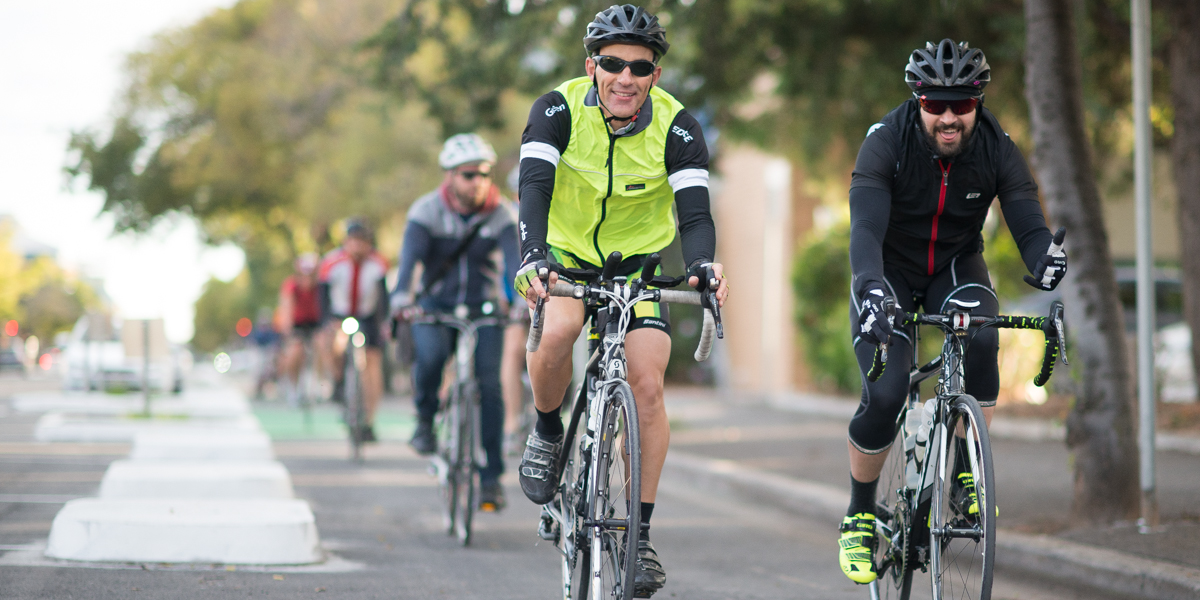 “Travel delay along Frome Street are constrained by the intersections, not by mid-block capacity,” the report says.

“The reduction in approach lanes at several intersections from three to two lanes has not materially impacted capacity because the right turn movement is prohibited at peak times, avoiding situations where both a left and right turning motorist is present and are waiting for conflicting traffic to clear.”

The report found that the main indicator of traffic flows and travel times on Frome Street related to congestion at intersections rather than the mid-block reduction of lanes because of the bikeway.

“Overall, we find no evidence to support the view that the bikeway has materially impacted on traffic along this section of Frome Street or on adjoining streets.

“While some motorists will on occasion experience additional travel delay as a result of the bikeway, such delays most likely arise from the peak period right turn bans, of which there is no evidence to suggest are commonplace.”

The report said the “disappearing traffic” was most likely the result of a reduction in the total number of trips taken by motorists who use Frome Street and a decision by some motorists to use an entirely different area of the city.

“While diversion from other forms of transport appears low, most riders who had previously used Frome Street said they now ride more often (71%) because of the provision of the bikeway,” it says.

The consultants used data from counts using tubes on the road, data from the Australian Traffic Network, travel time surveys and stakeholder surveys among other methods to make their conclusions.

The review found that there were risks to cyclists’ safety at traffic light intersections along Frome Street since the bikeway was constructed.

“The bikeway has significantly changed the risk profile for bike riders, largely by eliminating the risk of mid-block collisions with motorists, but possibly increased the risks at intersections,” the report says.

Of the four injuries to cyclists reported to police since its installation, three involved motorists turning left and cyclists travelling straight ahead at intersections along Frome Street.

A significant minority of cyclists surveyed – 39 per cent – reported that they had had “near misses” with cars at intersections along the road.

“We found subjective evidence of occasional misunderstandings between bike riders and left turning motorists that could lead to conflict,” the report says.

To reduce the risk of injury for cyclists at intersections along Frome Street, the report suggests the “Danish solution,” where continuous green pavement is provided across the intersection to ensure the understanding that cyclists have right of way travelling straight ahead at the intersections.

Nearly 90 per cent of local traders surveyed for the report said that the bikeway had not adversely impact the commercial performance of their businesses.

“It is likely that some businesses may experience a greater impact than others, through the displacement of parking and the change in parking operations,” the report says.

“However, the parking occupancy surveys indicated that the supply of parking is sufficient across all sections of the bikeway along Frome Street.”

There are 16 businesses located along the bikeway section on Frome Street.

None of the commercial property agencies the authors of the report spoke to indicated that the bikeway had been a factor which had influenced property prices on Frome Street.

The majority of property owners said that they did not believe the bikeway had adversely impacted on the value of their properties.

The report was put together by Studio Huss and CDM Research.