The federal Defence Department has refused to back Prime Minister Tony Abbott’s assertion that the Japanese Soryu submarine is “the best in the world”.

The PM made the claim in February, telling parliament that discussions over the multi-billion dollar Future Submarines contract “have been more detailed with the Japanese, because the Japanese make the best large conventional submarine in the world”.

But written answers from Defence to questions put on notice by Senator Nick Xenophon from an Estimates hearing are considerably less effusive.

Asked whether authorities have briefed the Prime Minister that the Soryu is the best in its class, the department replies: “Defence has provided a range of advice to Government on the future submarine program, and through engagement with Japan, Defence has established that Japan has been successful in the design and build of the Soryu class, which is of a size similar to that required by Australia.”

However, it continues, “publicly available information does not provide a true indication of the capabilities of the Soryu design”.

“Submarine capability is judged against a number of attributes, including range, endurance, payload, stealth and sensor performance. The Soryu and Collins class differ in various ways when each of these attributes is considered. There are particular requirements for the Future Submarine that the Soryu class has not been designed to meet. Incorporation of the preferred combat and weapon systems for the Future Submarine would also entail design changes.”

Defence revealed senior navy submarine command-qualified officers have “been to sea in a Soryu class submarine” early this year as part of their research.

“My mail in terms of people that I’ve spoken to, the inside running is with the Japanese,” Xenophon said.

“They’re the favourites to win this, the process seems to be stacked towards them and that is a real concern because they have never built a sub overseas let alone shared their technology, unlike the French or the Germans,” he told ABC Radio.

He also highlighted fears an overseas design would not yield local jobs in manufacturing, highlighting another response to a Question on Notice, with Defence Minister Kevin Andrews confirming the much-hyped 500 new jobs would instead be in “design assurance, combat system integration, and land-based testing of submarine systems”. 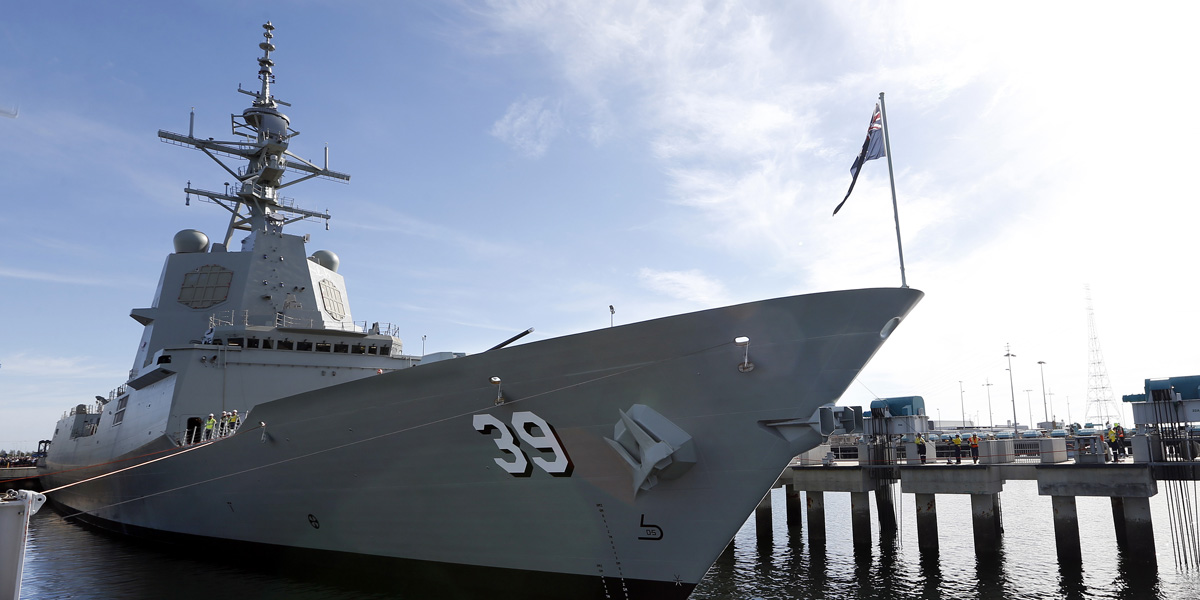 The HMAS Hobart after its launch in Adelaide on Saturday. Supplied image

It comes as the Liberal Party’s embattled member for the Federal seat of Hindmarsh claims he’s lobbying his colleagues “extremely hard” to push the case for South Australian shipbuilding.

The Abbott Government lobbed an eleventh hour grenade into celebrations for the weekend launch of the first Air Warfare Destroyer, selectively leaking details of an internal audit that cast the AWD’s management in further bad light.

It was seen as a concerted bid to undermine ASC’s case for a significant slice of the Future Submarines project. But the move could have local political ramifications, with defence jobs a sensitive issue with South Australian voters and the prospect of several Liberal seats changing hands.

Hindmarsh, already on a knife-edge, appears the most likely to fall, but incumbent first-term MP Matt Williams said: “We’ll see about that next year.”

“People know in my electorate that I’m working very hard, talking to every minister,” he told ABC Radio.

“I spoke to (Finance Minister) Matthias Cormann last Wednesday, each opportunity I have I’ve brought a Cabinet Minister down to ASC and I’ve had numerous meetings with the Adelaide and the South Australian business community where they’re talking about defence shipbuilding and arguing the case.”