A decorated veteran who has publicly advocated the Weatherill Government’s controversial plans for the Repatriation General Hospital is a personal friend of Veterans’ Affairs Minister Martin Hamilton-Smith, InDaily can reveal.

Veterans’ Advisory Council (VAC) member Michael von Berg came out in a show of support for the plan to close the hospital and relocate many of the precinct’s services last week, while Hamilton-Smith was acting health minister in Jack Snelling’s absence.

But he denies any conflict of interest – despite confirming his wife is a fundraiser for the minister’s re-election in Waite and his step-daughter is employed in Hamilton-Smith’s office.

He’s been backed by prominent former soldiers, who say the VAC had to speak out on the issue because it feared the veterans community would be seen as “whingers”, in the face of prominent protests by ex-servicemen on the steps of parliament.

The Repat sits inside Hamilton-Smith’s Waite electorate, and his former Liberal colleagues – staunch opponents since his stunning defection last year – have made the issue a major pillar of their campaign to unseat him.

Von Berg, a Military Cross recipient and national president of the Royal Australian Regiment, has weighed in on political matters previously: during a 2012 Liberal leadership challenge he publicly railed against incumbent Isobel Redmond’s claim that Hamilton-Smith’s military background made him less electable, accusing her of “scoring a political point against a challenger”.

His step-daughter Brenna Chia’s LinkedIn profile states she is currently employed in “Community Engagement” for Martin Hamilton-Smith, though von Berg says she only works there “about two-thirds of a day a week”, which is “hardly employment”.

“I would say (to the protesters) it’s pretty cold out there and I would be worried that some of them are going to get sick and depressed,” von Berg told The Advertiser.

But he denies any conflict of interest in his public utterances.

“Not at all,” he told InDaily.

“You can talk to anyone about me; I play with a very straight bat.”

He said he knows Hamilton-Smith through the SAS “family”, though he served about 15 years before the now-minister.

“Once you’ve served, it’s a family – everybody knows everybody,” he said.

“That has absolutely nothing to do with my decision-making (and) to suggest there’s some sort of conflict of interest, to be perfectly honest, I resent that comment.

“Yes, there’s a military connection, but that in no way clouds my judgement … If there was a conflict I’d vacate the chair.”

He said other VAC members were fully aware of his connection with Hamilton-Smith, and didn’t believe there was a need for further disclosure.

“Oh, you know, the public don’t know that my family has a relationship with Martin, what’s that got to do with it?” he said.

“Are you suggesting my step-daughter working a day a week and my partner fundraising for him, you’re suggesting there’s something wrong with that? I feel very comfortable.”

He didn’t resile from his comments during Hamilton-Smith’s leadership spill, when he contacted radio station ABC891 to register his “disappointment” with Redmond.

“The inference through ignorance or intent by Isobel Redmond to score a political point against a challenger suggesting that all serving or ex-military are not normal people or in quotes ‘a normal person’, I think is a very cheap shot and is unwarranted,” he said at the time, prompting the then-Liberal leader to issue a grovelling mea culpa. Redmond ultimately won the ballot by a single vote.

“I took offence at (her comments), I certainly did … My word I did!” he told InDaily.

“For the whole of the military, not just for Martin; she was suggesting the military were morons, don’t have a brain and … run business like the military.”

He responded to questions about his family’s professional involvement with Hamilton-Smith by saying: “I’m going to get very irate”, and insisted his relationship with the minister “doesn’t come into the equation at all”.

“I’ll tell you why: when this (Repat plan) was all mooted, (Health Minister) Jack Snelling took a few of us into his confidence …Jack was and still is driving the agenda,” he said.

He said while he was initially sceptical, after careful analysis of the issues “you could just see it was time for change”.

“I might add the Government has not made any final decision,” he said.

“I hate this word ‘closure’, it’s just so final; this is not closure, it’s just a revamp.”

“In all honesty, I don’t because I don’t believe there is … the only interest VAC has is in better outcomes for veterans,” he said.

He revealed the impetus for the public show of support came from VAC chair Sir Eric Neal, who was “concerned the argument had been skewed by a few people who were advocating for saving the Repat when there’s a lot of discussion still ongoing about what that means”.

“There was a discussion around the table about Transforming Health and issues associated with the Repat, and overwhelmingly the members of VAC advocated for a pragmatic approach to engage with SA Health to ensure whatever changes result in better health care outcomes for veterans,” he said.

“Sir Eric Neal said he’d like to get that message out, because the veterans community was potentially being seen in a bad light, and there were those who would refer to them as ‘whingers’.”

Sir Eric’s own thoughts on the Transforming Health plan are published in today’s InDaily.

Manton heaped praise on von Berg’s record, saying: “This bloke’s a Military Cross awardee; this guy’s been through it, he’s seen it, he’s done it … and fortunately survived.”

“His opinion within VAC is important because of his experience.”

He couldn’t comment on von Berg’s comment during the Liberal leadership stoush, as “I don’t know what the discussion was about”, but insisted “the whole VAC know” about his relationship with Hamilton-Smith.

“Adelaide is a small town; we all know the minister,” he said.

“We all know a lot of ministers.” 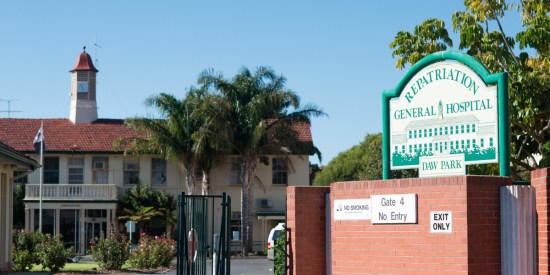 The Repat at Daw Park.

Hamilton-Smith, who is leading a trade delegation to Thailand, did not return numerous calls from InDaily, who sent both he and his office the following questions:

– What is your relationship with Mike von Berg? Is he a friend?

– Do you have any personal or professional relationships with other members of his family?

– Do you consider it appropriate for him to advocate publicly on issues that could benefit you politically (ie the Repat plan and criticising Isobel Redmond during a leadership campaign)?

His office sent the following response:

“Michael von Berg’s military and professional experience is indisputable. He was awarded the Military Cross, has served in the Special Air Force Regiment and was the Director of a strategic management consultancy for 20 years.

“Michael von Berg’s expert advice is widely regarded throughout the veterans’ and political community. He sits on the Prime Ministerial Advisory Council, as well as the South Australian Veterans’ Advisory Council.”

Von Berg told InDaily while the Repat had a “wonderful culture … I just feel all these wonderful people are operating in a third world facility”.

“I just think it’s getting past its use-by date,” he said.

He said he was “hellbent” on the Post Tramatic Stress Disorder unit staying on-site in some form, arguing: “You simply can’t have it on the seventh floor in the new RAH; it’s too sterile, too cold, and just not conducive to treating that condition.”

“The real sad thing about this is there’s a lot of emotion tied up because of the attachment to Daw Park, and I perfectly understand that (but) I don’t think we can have emotion tied to a lack of change, a lack of review,” he said.

“What I’d like to see achieved is the best possible health outcome for veterans.

“I can tell you, if we got get shafted by the Government I’ll be the first bloke sitting on the steps of Parliament House.”