There will be no court challenge to the knife-edge by-election result in Fisher.

The cut-off for lodging a disputed returns notice with the Supreme Court ended at close of business yesterday.

Independent candidate Daniel Woodyatt told InDaily via text message this morning: “I will not be challenging the Fisher by-election result.”

But the campaign was marred by contentious electioneering: electoral commissioner Kay Mousley ordered a Liberal pamphlet withdrawn in the last week and told Woodyatt he could consider an appeal to the court of disputed returns if he considered the election result had been compromised. Then, on polling day, Independent candidate Robert de Jonge was ordered to stop disseminating How To Vote cards preferencing the Liberals, having earlier submitted a split ticket to the electoral commission.

De Jonge is a member of the Liberal Party who had earlier stood for party preselection for the seat, vacant after the death of long-time Independent Bob Such.

Woodyatt had engaged legal counsel last month but has since maintained his silence about his intentions.

The hotly-contested Fisher poll was a stark contrast to the ongoing spectacle in neighbouring Davenport, where voters are gearing up to elect a replacement for retiring Liberal Iain Evans on Saturday. 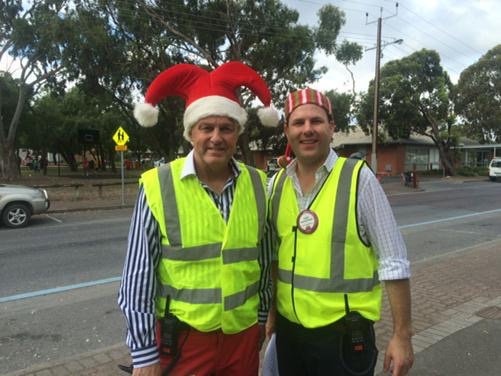 Iain Evans and Sam Duluk getting into the Christmas spirit: Source: Twitter

Evans protégé Sam Duluk is in the box seat but, stung by successive poll failures, senior Liberals privately maintain it will be “tight”.

Duluk – who contested Fisher for the Liberals in last year’s state election –  told ABC radio today “we worked hard in Fisher (and) received an 8 per cent swing”.

“A lot of the issues that are in Fisher are the same issues in Davenport,” he said.

“They’re adjoining seats…so many of the issues are the same in terms of transport, infrastructure, jobs and the economy.”