The extraordinary result, during the worst fire conditions the state has seen since Ash Wednesday, is already proving a landmark in best practise for emergency services. It’s likely to change the way bushfires are managed in the future.

Reports from the fire ground suggest that warnings to leave properties early were overwhelmingly heeded, and that those who did stay had prepared themselves and their properties in advance.

Both courses of action helped about 3,000 residents and property owners avoid the two most common causes of death* in Australian bushfires – attempting to escape too late, and trying to defend ill-prepared properties.

“I’m waiting for our incident report to come through, but anecdotally … most people heeded the message and left early,” Emergency Services Minister Tony Piccolo told InDaily.

“It was sad that 27 people lost their homes, but the fact that there was nobody in the homes when they burnt … is just a testament to the good work that we’ve done in preparation for this.”

South Australia is well-accustomed to serious fires, which occur six or seven years in every ten, but this was no normal fire.

According to Mike Wouters, who led the Fire Behaviour Team during the crisis, once the fire had started on the Friday afternoon, it spread at a terrifying speed.

“It would have probably been a couple of hectares (wide) in 10 or 20 minutes,” he said.

“CFS crews were on the ground quite quickly and (they) thought that they had it contained, but, under the severe wind, it escaped their containment.”

For two periods of around six hours – one on the Friday and another on the Saturday – the Sampson Flat bushfire was impossible to fight.

“The flame heights were too tall to physically deal with.

“The heat generated from the fire means that firefighters even in trucks can’t get close to the fires.

“Aircraft can do a little bit, but not a lot, because the fire’s moving so fast by the time the aircraft drops its load goes and comes back it’s probably moved from where it was.

“Pretty much, you can’t put it out. What firefighters tend to do then is they fall back to houses and other assets that need protecting.”

The fire was so hot that it generated its own thunderstorm. 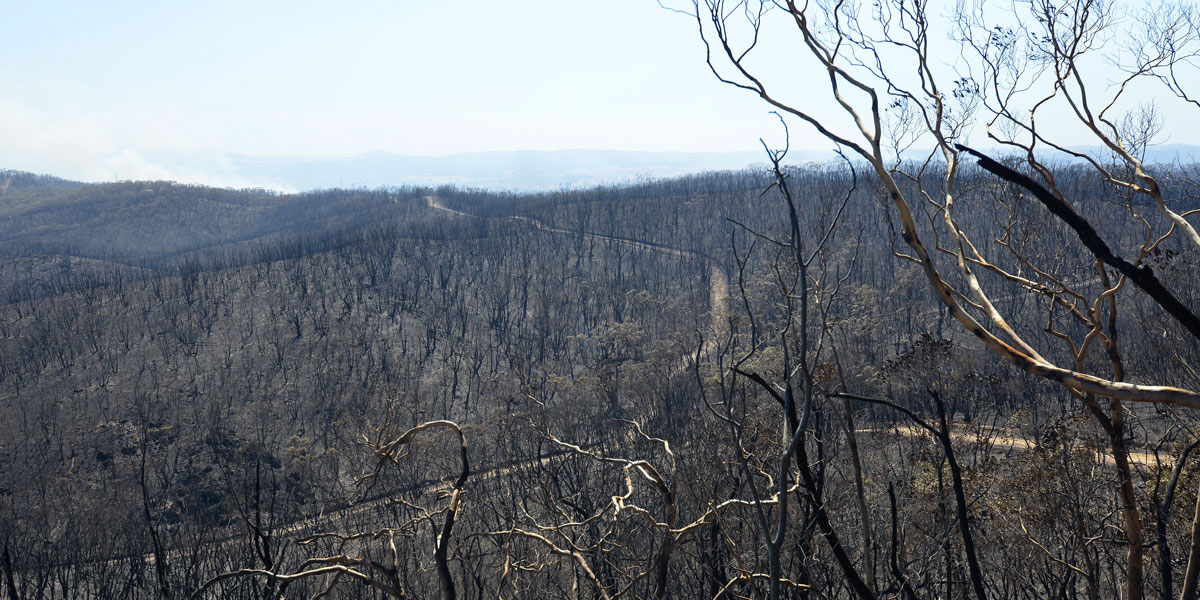 Burnt out land near Kersbrook.

By the Monday, with some fortunate weather, the inferno was 95 per cent under control.

According to Piccolo, this was partly because firies did not have to rescue anyone from their homes (or, at least, there have been no such reports) and they could instead focus their attention on fighting the blaze.

He puts this down to the effectiveness of the CFS communications campaign.

“In past years, often we’ve gone out as a government department and said: ‘we’re advising people to do this, this and this’,” said CFS Principal Communications Officer Neil Charter.

“This year we (tried) to get the community to take some ownership.”

Fire safety messaging also targeted a younger demographic and focused on the most simple preparation tasks available to people to increase their chances of survival on the fire day.

“Because it’s been such a long time since Ash Wednesday, we very much targeted the campaign this year to a younger, 18-35 year old audience,” said Charter.

“Our research tells us, over the past five-plus years, that people just want simple direction on what they can do to help keep themselves safe and to plan properly.

“We positioned the campaign to try and identify things that people could do that were simple.

This fire was fought using an unprecedented level of resources.

“At one stage at the Sampson Flat fire we had 28 aircraft working there,” said CFS Director of Preparedness Operations, Leigh Miller.

“Twenty years ago, we would have maybe had five.”

A web of bilateral interstate agreements and a national procurement system meant that American water bombers being leased interstate could be subleased to South Australian emergency services during the fires.

Around 300 personnel were brought in from interstate to fight the fire.

“We’ve probably had in total 3000 people involved in the management of these fires.”

But the successes of the firefighting and preparation efforts will not be the only lessons taken from the Adelaide Hills bushfires. The failures will also be closely inspected.

“Normally we would see people’s houses being places of refuge during a bushfire,” said Miller.

“But because there have been so many lost, we need to revisit that, to see how many of those dwellings were actually built prior to the introduction of planning controls for bushfire prone areas, and see if we can learn things from those houses that have been affected.”

But he said these reflections were unlikely to see any great change to the ‘leave early or stay and defend’ advice given by the CFS.

“It’s pretty much a proven position – if you leave your property early on a bad fire day, you’re going to be safer.

“‘Leave early’ is the best thing to do under these kinds of conditions.

“People can use their houses to safely shelter, but they need to understand what they need to do to make their places a good safe place of refuge.

“The primary thing that people need to do is to make sure that the fire load around their dwelling is managed, so a house is not exposed to too high a level of radiant heat.

“It’s those people who are making those last-minute decisions to leave are the ones that get caught out, and the majority of deaths and injuries seem to be in vehicles.”

The Sampson Flat fire is now extinguished, but authorities are warning that the danger period is not over yet.

Parts of the West Coast and Eyre Peninsula, the Flinders and Mount Lofty Ranges are expected to be at highest risk for the rest of this fire season.

“We need to be mindful that we still have three or four months of summer to go,” said Miller.

“When the next dry period comes in, we’ll get into the fire season once again.”

“People need to think about their bushfire survival plans, have them in place and be ready to put them into action.”