Lindt cafe manager Tori Johnson has been remembered by colleagues as a selfless man who always put others first.

The 34-year-old was killed at the popular cafe in Sydney’s city centre during the final minutes of a 16-and-a-half hour siege that ended early today.

Also killed was barrister and mother-of-three Katrina Dawson, 38, who worked in the city.

There are unconfirmed reports Johnson wrestled with gunman Man Haron Monis in the cafe as other hostages tried to flee. 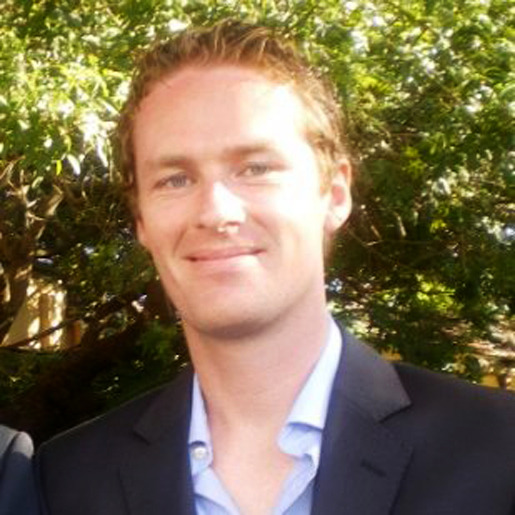 “He was an amazing man,” Manettas said today.

“He was a selfless person who always put staff above everyone. He put himself second.”

Manettas said Johnson still popped in for a coffee at the Darling Harbour restaurant, more than two years after he finished working there.

“We’re all deeply saddened at this company by what has occurred,” a visibly upset Manettas told reporters.

“This company is a family company and Tori was a member of that family. Not a day would go by when he was working with us where he wouldn’t talk about his sister or his father.”

Johnson and fellow hostage Dawson died, along with the gunman, when heavily-armed police stormed the Martin Place café.

“Katrina was one of our best and brightest barristers who will be greatly missed by her colleagues and friends of the NSW Bar,” association president Jane Needham SC said in a statement.

“She was a devoted mother of three children and a valued member of her floor and of our community.”

Dawson, who attended prestigious girls school Ascham, topped the state in the Higher School Certificate in 1994 with a TER of 100. She also topped her bar exams and is the sister of well-known media barrister Sandy Dawson.

NSW Premier Mike Baird has laid flowers at the make-shift shrine to the two victims. He appealed to the city to come together.

“What we need to do is to come together like never before,” Premier Baird said this morning.

Sydneysiders have been left shocked by the hostage crisis, which lasted 16-and-a-half gruelling hours, after a lone gunman walked into the Lindt cafe just before 10am yesterday.

A solemn and visibly shaken Baird said: “They’re trying to express what we all feel.”

Baird said a lot of people are hurting.

“We are so proud of everyone and right now though our thoughts are with the victims, families and their friends and we need to do every thing we can to support them at this time.

“Everyone is hurting a lot.”

Asked if Martin Place would get a permanent memorial to the victims and one of Sydney’s most terrifying days, Baird said the city must first get through the terrible ordeal.

“It will always be a very special place for us. Let’s just get through it.”

Who was Man Haron Monis?

Siege reporting: a question of ethics