Former AFL player and TV personality Troy Gray’s business Destination For Men Pty Ltd  has been wound up after a failed franchising deal, a fire and controversial promotions.

Liquidators for the company, which ran a hair salon on Unley Road, Parkside, are in the process of selling the business as a going concern.

DFM has unpaid debts of around $1.1 million, mostly owed to Gray himself.

It’s the end of a rocky road for Gray’s venture that started in 2006.

The business model was pitched at the trendy male and was heavily marketed by association with celebrities.

“Men can come into the salon for a hair cut, barbers shop shave, massage, manicure or a pedicure and also ‘chill out’ in front of the large TV screens and watch the footy, cricket, soccer, car racing or whatever sport they fancy and at the same time enjoy a complimentary beer or two or cafe latte,” the business franchise pitch said.

In 2008 Gray and his salon were named in investigations into vote-stacking at the South Australian Jockey Club.

Documents tabled in a Supreme Court injunction hearing detailed irregularities in the recruitment of members to the SAJC in the second half of 2008 and the manner in which those new members exercised their votes in the club’s 2008 board members election.

Customers at Destination for Men were offered free membership of the SAJC and then were instructed to fill in ballot papers for the election.

Financial records tabled at the hearing showed 30 memberships – all dated October 10 2008 – were paid by Vox Australia Pty Ltd, a trading name for Destination For Men and Gray’s media business.

“Mr Ploubidis explained that although the SAJC has used the services of Mr Troy Gray (hosting marquees, etc), he chose to have Mr Gray approached through Mr Raftopoulos’s business premises,” the authority’s report states.

“Mr Raftopoulos provided Mr Gray with the opportunity to promote Mr Gray’s business through offering paid-for memberships of the SAJC.

“Mr Ploubidis accepted that Mr Raftopoulos would also obtain a benefit in the transaction.

“Mr Ploubidis advised that in the vicinity of 350 to 360 people were recruited to membership in the manner described.”

Gray told the authority he had become involved in the deal as a promotional opportunity to get customers into his shop and that he had no involvement in the SAJC other than doing some voluntary compering at functions.

“The Authority concluded that each of the three witnesses had presented a version of the truth tailored to minimise his own involvement,” its report states.

“Their combined story makes no sense, as the method said to have been employed would not have achieved the result Mr Ploubidis had indicated was desired.”

In 2010 Gray launched an attempt to franchise Destination for Men.

“There was an attempt to franchise the business through a franchise agency, but it failed,” a spokesman for the liquidators told InDaily.

“The agency was given control of the business and Troy was going to get 50 per cent.

“Instead they walked away from the deal and left debts.

Its unlikely he will recover those funds.

The business at Unley Road has been advertised for sale at “around $260,000”.

After small creditors and liquidation costs, there will be little left.

In January this year fire crews were called to the Unley Rd shop after flames were seen coming from the doorway.

Firefighters managed to bring the fire under control within 15 minutes and limited the damage to $30,000.

The MFS said it believed the fire started when hot towels left in the shop spontaneously combusted.

Troy Gray remains a consultant to the liquidators on the sale of the business.

“We are still in the process of finalising the contract for sale,” the spokesman said.

“The business will still operate out of Parkside, but Mr Gray is not involved in the proposed buyer.”

Gray told InDaily; “Destination For Men will be sold as a going concern following a failed partnership with a Sydney based franchise company. It will be business as usual at the salon and I will continue to be involved as a consultant. ” 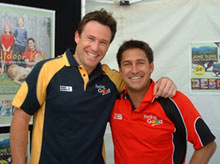