The family of an Australian airman still inside a World War II bomber found crashed in a swamp near Berlin is close to securing agreement for the removal of his body.

The Halifax bomber was shot down during a night raid over Berlin on August 23, 1943, and crashed into a swamp 35 miles north of the German capital.

The body of Flt Sgt. William Burgum, whose family live in Maryborough, Queensland, remains inside the wreck along with other members of the crew.

Burgum was 21 when he was killed.

The fate of the bomber crew had been a mystery until volunteer historians in Germany, Australia, Canada and the UK coordinated their searches of records and then the physical area.

The Australian connection was John Williams, whose Aunt Peggy was fiancée to air gunner Flt Sgt Harley Harber, one of two Australians in the Halifax’s crew of seven.

“When Peggy died, the photos of, and letters from Harley were passed on and my interest was sharpened.”

Williams has coordinated a 12-year search and retrieval campaign for the families of the airmen.

“We’ve kept it low key, but it’s now very close to being resolved.”

British records show that two of the Australian’s bodies had been removed by German officials the day after the crash, but they were unable to reach the others inside the plane after it sank to the bottom of the swamp.

“There was an attempt by the British in 1947 that also failed and then in 1949, the area became part of East Germany.

“That was where it stayed until the plane was re-discovered by local historians in 2002.”

The same historians would later be involved in the discovery of wreckage of Adelaide Pilot Robert Naffin’s Lancaster bomber, solving a 70 year puzzle for the Naffin family in South Australia.

Parts of that wreck have been sent to Adelaide and will soon be displayed at the Aviation Museum.

As it turned out, both planes crashed on the same night during the largest bombing raid on Berlin in World War II.

From around midnight 727 aircraft consisting of 335 Lancasters, 251 Halifaxes, 124 Stirlings and 17 Mosquitoes flew out from the UK – 671 returned.

John Williams has been dealing with an international bureaucratic web in the push to have the Halifax bomber bodies removed and buried at the Commonwealth’s War Graves Commission site in Berlin.

“The first problem was an environmental one,” he said this week.

“The local officials said the swamp was a biosphere and they were concerned that attempts to remove the plane and its interred crew would release petrol and oil into the delicate environment.

“We made representations to the State of Brandenburg via the Defence Department and RAAF in Australia.

“The Deputy Prime Minister Warren Truss has been involved and been supportive.

“Some correspondence was sent to someone else and there was a loss of communication for quite a few years until I went back over there in 2012.

“What’s happened is that the swamp is now a bog and the plane has started to appear in parts above the surface.

“The State of Brandeburg eventually resolved the environmental concerns and now its just been a matter of coordinating letters from all the families, dealing with Defence and the RAAF and raising around $70,000 to pay the cost of pulling the plane out.

“Governments don’t pay for retrieval, but they will fund the eventual re-burial.”

Ian Hill, who coordinated the search for the Naffin Lancaster bomber, has also been involved in the work to finalise the Halifax retrieval.

“Work is afoot to raise the funds needed,” he told InDaily from his home in Cheshire, north west England.

“It is being coordinated by a Canadian Aviation Charity and they are trying to raise 50,000 euros; they have already raised CA$20,000 and are hoping to attempt excavation later this year.”

John Williams has coordinated the correspondence between the families in Canada, the UK and Australia, even though one of the two men removed from the plane back in 1943 was his Aunt’s fiancée.

“These airmen died a long way from home. They left to fight for a better world and died for it.

“We owe them a debt we can never repay but it is important to give them a decent burial and for them to be with their fellow crew members.”

British aircrew Hill, Buck and Hempstock have families in the UK, although one remains untraced.

“All the letters have been signed and we’ll send them to Brandenburg and then hopefully we get the go ahead,” Williams said.

“The best month to do it will be October, when the birdlife has gone, the winter is starting to set in and there’d be little damage done.

Pat Davies, 94, the sister of trapped navigator Sgt Peter Buck, told UK media: “It would be a nice thing for them to finally be laid to rest in a proper burial.”

Mrs Davies, from East Sussex, said: “We just weren’t told anything at the time – it was quite extraordinary.

“One letter came and said the plane went down and roughly where it happened. That is all we ever heard.”

Williams and the group of volunteer German historians are slowly solving family mysteries that have been dormant for 70 years.

With it they bring some closure, albeit too late from some long departed friends, family and lovers. 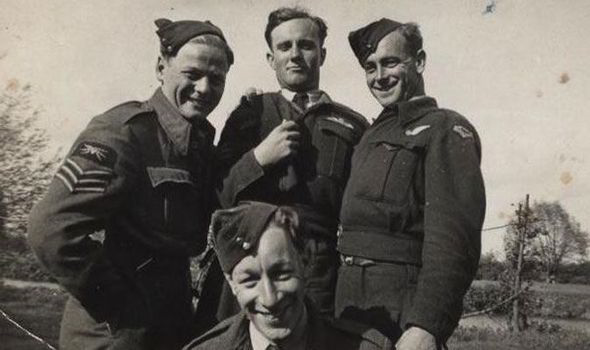