Many of our interactions with buildings, artworks and spaces in the modern day are undertaken on screen, and our opinions and reflections are delivered with a single click.

This changes the way we view art and design.

As the art we consume tilts heavily towards being viewed in two dimensions, Adelaide artist Tom Borgas is exploring the interface of sculpture with the digital landscape.

Having worked as a graphic designer predominantly in printed media, Borgas talks to InDaily about the way in which exploration of 2D and 3D forms has transformed his work, how his graphic design background influences his sculptural works, and the relationship between art and the space it occupies.

How do you go about making 3D artwork for a 2D platform?

All art will now be viewed on a screen more than in person; the awareness of this affects my work. I want to be sure it works in 2D and 3D. For example, sometimes the scale of the piece is not apparent in the 2D image.

Photographs frame things – not just a physical framing, but you choose the area in order to define what’s there. When I’m making something I think about how it will be lit and what angle I prefer it viewed from. This is partly influenced by the years I have personally spent viewing things online.

Proposals, grant applications and competitions also rely on a 2D images of work, so in some ways, the documentation of my work drives my practice. Having said that, it also needs to work in 3D as an experience in space and in relationship to the viewer – in some ways, that’s more complex. I don’t really see a separation of 2 and 3D.

Does working within particular spaces influence your work?

Working in sculpture and installation essentially involves working with space, form and the viewer. Form and space always exist together – they rely on each other, so an understanding and awareness of space is just as important as an understanding of how to make things. In the same way that a frame establishes a space for people to encounter a painting, space is what frames the installations and artefacts that I create.

For me, knowing a space well is a key part of developing work. Riparian Artefacts [an installation of “speculative sculptures of post-digital debris” which was displayed in Adelaide’s CACSA gallery earlier this year] is a site-specific work. Although it was conceived on paper in my studio as a proposal, it was fabricated in the gallery to ensure that it was going to work with the space there. 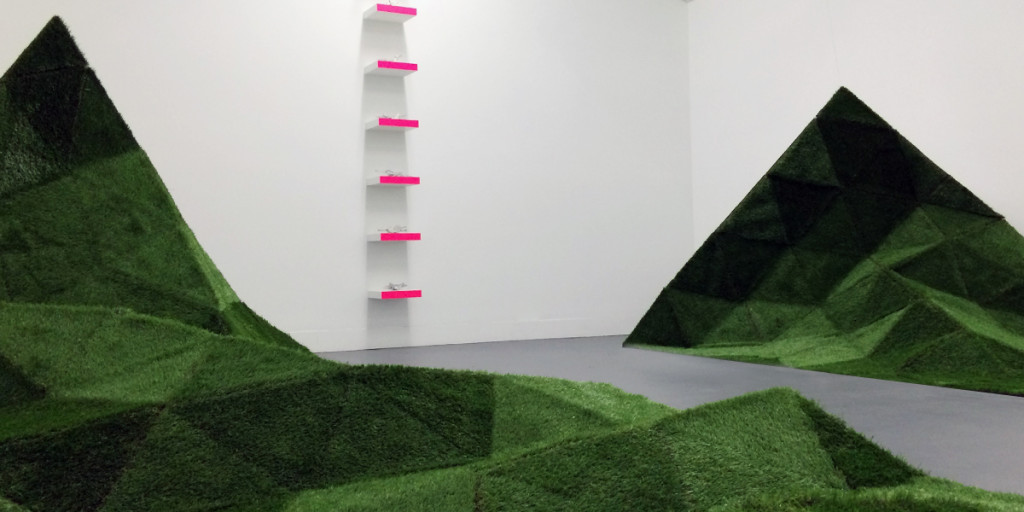 Does your graphic design background influence your sculptural work?

My graphic design background tends to drive the aesthetic resolution of my work – the colours, the geometry, the structures all have a digital flavour. Having said that, the impetus for my work comes from a movement back and forth between order and disorder, between natural and synthetic forms and structures, and between digital and analogue processes. My design background focuses on making things clean and slick, but it’s just as important for me to make a mess, break things, let things go.

I’ve found that progress only happens when I move beyond my comfort zone – I think that’s where creativity is born.

I also photograph my work a lot as it develops and distribute images of it via apps like Facebook and Instagram and this drives the work’s development. The idea of a viewer is important to me and this is a way of finding direction. From a graphic design perspective, I guess it’s kinda like a brief.

What was the concept behind the name of your recent work at CACSA Gallery?

The concept of my CACSA exhibit was developed as a speculative proposal back in May of last year. It was based on some research I was doing at the time into digital media theory – more specifically, the way that people engage with online digital media.

David Berry talks about the idea that mobile and wireless digital culture now allows us instant access to constant real-time streams of data, but the reality is that most of us are only engaging with it in a very superficial way. There is very little thoughtful, significant contribution to this data. Twitter is limited to 140 characters; most people simply “like” or briefly comment on Instagram or Facebook posts. He likens this kind of passivity to entities that exist on or near the riverbank (the riparian). He sees the majority of users as being “…strangely connected, yet simultaneously disconnected, to the data streams that are running past at speeds which are difficult to keep up with”.

Riparian Artefacts is part CGI landscape, part digital debris. Like remnants washed up on the bank of a virtual river, the elements that furnish the space are a sculptural investigation into technology as an extension of nature – a carefully fabricated fusion of digital and organic form. As an immersive experience, the installation references the aesthetic motifs of software but also calls for a physically active engagement on the part of the viewer/user.