A poetics of engineering underpins Taylor Cullity Lethlean’s reclamation of North Terrace from a worn, sterile streetscape through a design process that also disturbed the civic equilibrium to replace the known and well-loved to create a unique urban language for Adelaide.

To traverse the recent Stage Two North Terrace project is an altered experience to the excitement of the ground-breaking impressions I saw in its first stage.

The project that transformed the public persona of the cultural icons of the city saw the State Library, Museum of South Australia, Art Gallery of South Australia and Adelaide University all line up afresh to celebrate the illumination of their urban facades.

TCL employed gardens, fountains and articulated ground underfoot to draw attention away from the presence of the commercial city and the east–west road drain. 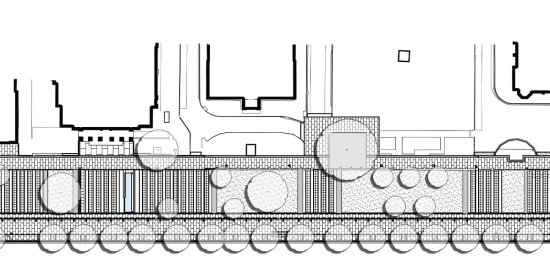 It felt as though new domains had been opened up for all to access; even though the civic architecture contained the same cultural archives and display programs as before.

Adelaide had until then taken for granted and even overlooked the qualities inherent in its public realm, now it appeared remade as an urbane city courtesy of a micro-topographical agenda that merges biota and social streetlife.

The bookended Stage Two encompasses Parliament House to the west and the two universities, Adelaide and University of South Australia, to the east. 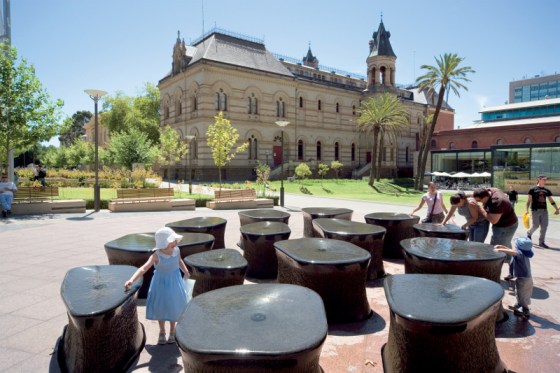 A seemingly less energetic design resolution with fewer spatial interruptions and a scale shift between paving, lawn, water display and planting may be the result of fiscal austerity in the client’s public purse or perhaps is a particular TCL intent to experiment with levels of intensity along the Terrace.

This paring back of design detail responds to both the gravitas of the corresponding institutions and their contained edge conditions, as it also confirms the civic address of the important public buildings and their more private neighbours.

And despite the best intentions of waterwise no-grass planning in this dry city and as homage to public preference, its people are now re-invited to loll about on the comforting green grass under shady deciduous trees, thus making long, hot summers more bearable.

To reclaim the urban as a place to work with rather than against dynamic environmental systems underpins the design elements conceived of for the Terrace.

With topographical intent, water is drawn from systems that replenish rather than extract, and are returned with the art of water play principally in mind.

The diversity of fountains, pools and rills along the Terrace seemingly reference the ancient Mughal gardens of India. The Terrace’s water jets recall the Alhambra and Generalife in Granada that also employ the presence of water in a dry place for cultural and environmental benefit underpinned by engineering principles. 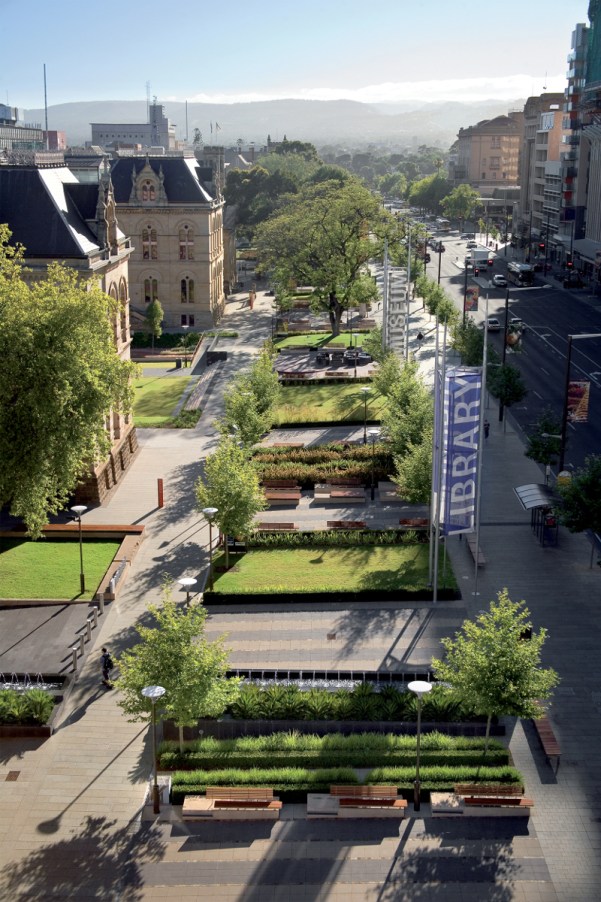 Water is the event landscape of the Terrace, as it also acts as an ephemeral micro-topography in concert with the patterning of stone paving that infers the geology of the escarpment beneath.

Each carefully worked detail that infuses the Terrace with life is drawn from local references of the forms, materials, ecologies and vegetation of the greater South Australian landscape – presented through design elements that engage beyond simple reinterpretation.

To walk the length of the Terrace is to expect to be interrupted in one’s path; to be led around and through diverse spatial experiences and made to pause and reflect upon an unusual detail and in the process become engaged with re-imagining the city.

North Terrace shape shifts along its length, encompassing both complex material form and detail and a subtle presence that folds planes of urban fabric into existing architectures and pragmatic infrastructure. 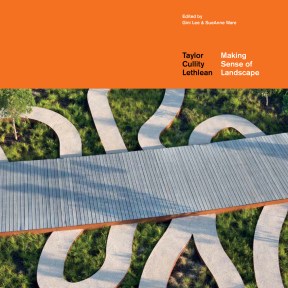 TCL’s Terrace mediates the political city civic and the landscape civic of parks, playing fields and river walks through a recovered attention to intensive design resolution at micro-topographic scale.

With an eye to the asymmetry of the commercial centre and the cultural edge, the Terrace also reconciles the presence of the ‘empty’ ground between Light’s Adelaide and North Adelaide, and the topographical divide that splits the city’s grids.

North Terrace’s material topographies transport the other green heart – its ring of parks that encircle the city – that defines this arid city into the street.

Even in its still incomplete state, the Terrace offers a public landscape that is at one with the civic and with the park.

– This is an extract from landscape architect Gini Lee’s essay, North Terrace: Microtophography and the Civic in Taylor Cullity Lethlean’s Making Sense of Landscape (eds Gini Lee and SueAnne Ware), published last month by Spacemaker Press. Images in this story are also from the book.