The Premier said headlines in a recent edition of The Advertiser demeaned Koutsantonis.

“It’s obvious what they’re up to; one is plainly an attempt to look down at its nose at a man,” he told ABC radio this morning.

ABC Radio presenter David Bevan then asked the Premier if he thought the coverage was racist, Weatherill said: “That’s right.”

“In that headline and that story.”

The Premier then went to great pains to emphasise that the racist tag was no more than “his opinion”.

“I’m just expressing my opinion; I’m allowed to have an opinion.

“All I can say is that Tom Koutsantonis is going to make a fine Treasurer.”

The headline that sparked the Premier’s outburst appeared last Thursday, the day after the announcement of ministerial positions in the new government.

The front page pointed to an inside story: “Economy handed to L-Plate Treasurer”.

The story, on pages six and seven, was headed “Koutsantonis racked up more than 32 traffic fines totalling more than $10,000. He worked as a taxi driver and ran the family’s takeway chicken shop … now he’s in charge of the state’s purse strings.” 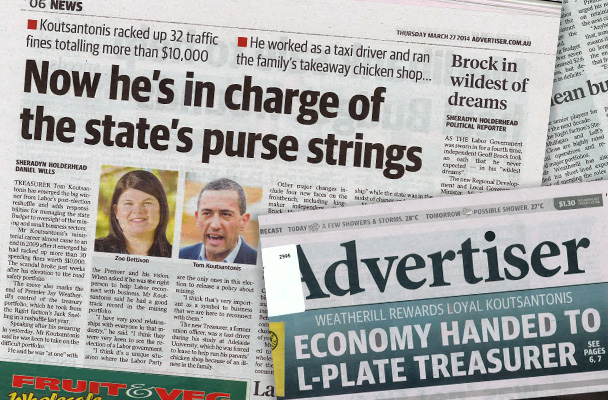 The Advertiser’s Paul Starick told InDaily this morning the paper would not be responding to the Premier’s attack.

“We won’t respond. We’ll leave that to him.”

Today’s attack on the newspaper was a step up from last week’s response by Weatherill to the L-Plate front page.

When asked by ABC Drive presenter Michael Smyth what he made of the headline, he said: “Well I thought the remarks were inappropriate … bordering on racist … also very classist.

“I think a young man who worked in his parents’ business, came out from Greece, made their own way here; he helped out in the family business and then put himself through university driving a taxi…I think that’s a story of great achievement.

“I don’t think people should be looking down their noses at that.  I think it’s something to be celebrated … I’ve watched Tom grow every day in his ministerial career … I couldn’t be prouder to have appointed him.”

It’s been a tough couple of days for Koutsantonis.

On ABC Radio yesterday he was asked to define the economic term “net financial liabilities” – which he did, with the proviso that he would check to see if he was right.

Later on FIVEaa he was asked if he knew whether state revenues were growing or not; he declined to be specific.