In our technological age, when so many of our social experiences are virtual, the role architecture can play in the experience of real-time situations is increasingly curious.

How does architecture affect our emotions and what kind of design interventions can be made to help us survive the chaos of daily life?

In a recent conversation with a client, as director of the Northern Office for Research and Design (NORD) in Glasgow, Scotland, I suggested that architecture often forgets that one of its primary goals is to trigger an emotion.

We were discussing a new hospice and a Maggie’s Cancer Caring Centre, part of a network of drop-in centres in the UK I’m working with that aim to help anyone who has been affected by cancer. While these buildings carry a weight of seriousness due to the circumstances of the people who arrive to inhabit them, we are mindful of the need to balance these serious issues and vital care provision alongside the social, spiritual and emotional needs of the patients as part of our design thinking.

In both projects a small library space becomes a familiar anchor to root the experience of the building around a quiet place to think.

The noblest architecture can sometimes do less for us than a siesta or an aspirin … Even if we could spend the rest of our lives in the Villa Rotunda or the Glass House, we would still often be in a bad mood. – Alain de Botton, The Architecture of Happiness

We cluster round Wi-Fi zones, power sockets and screens and have so many of our social exchanges online. “Quiet zones”, such as that on the train ride from Glasgow to London, where electronic and human noise is kept low, are a telling sign that the technological assault on our senses and on our public sphere is coming under scrutiny.

On a recent train ride in Melbourne, everyone in the train carriage looked up in synchronised frustration when their phone or tablet signal was lost as the train went into a tunnel. Their gaze had been fixed on miniature screens for the journey and only a mass concrete structure could bring them back to the reality of the social surroundings of the carriage.

Wi-Fi and online networking are here to stay but the future may herald the rise of the architecture of quiet spaces or the library – which, as many have argued, are under threat from online archiving and information searching.

Libraries are serious spaces; usually the older ones have an aura of dignity and restraint. Historically, the idea was very clear: the library would form part of the civic infrastructure of a place and the community it served. 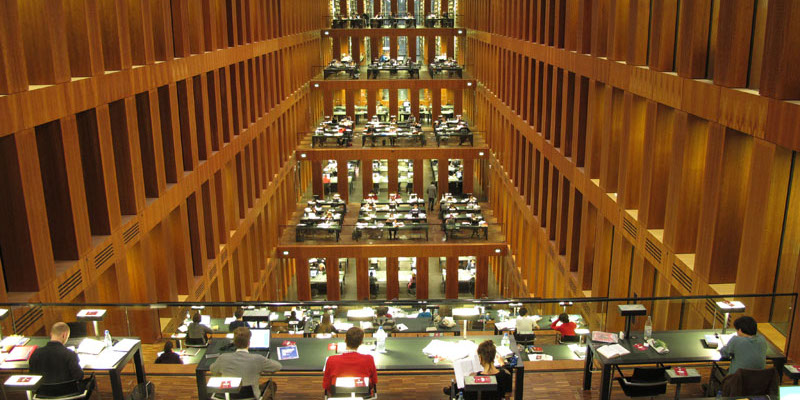 These are spaces that make you feel like a child who has discovered something for the very first time. 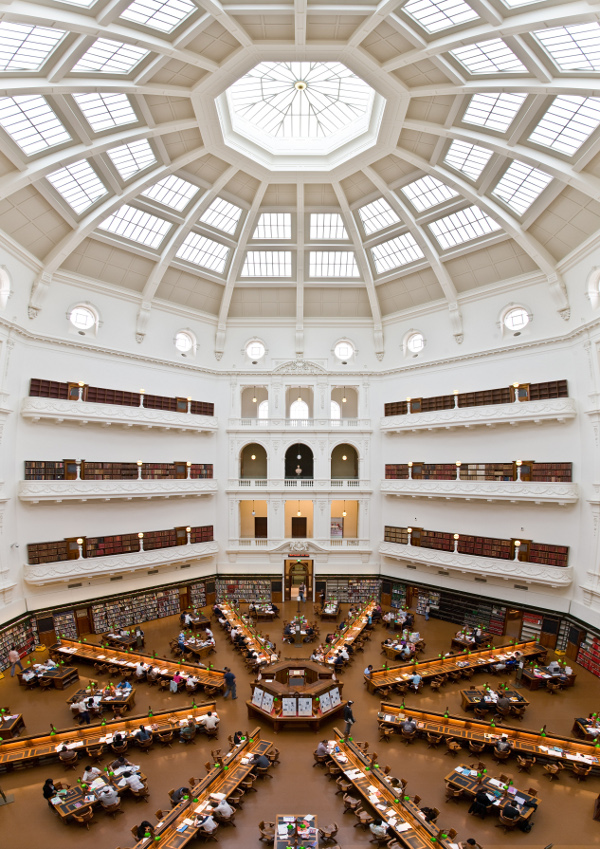 Libraries are all about atmosphere – which is difficult to sense in so much of what we experience in the contemporary city. They are spaces that seem in opposition to the world outside. Sound is always amplified in a library space and we can experience a heightened appreciation of the quality of light, the materials, the smell of the books, the temperature, the furniture, and the people around us.

The library has survived as a particular type of space when so many others have merged or morphed into each other. The hybrid space, where many different media converge, has emerged as a flexible and adaptable space – one where use is extended to the changing demands of the time-poor citizen of the 21st century.

Living in an homogenised environment

Aesthetics have been stretched to encapsulate so many uses that we now live in a homogenised environment and find it hard to distinguish one building’s use from its neighbour’s.

Architecture, I think, should still strive to move us, to make us feel a particular way. Like a piece of music, architecture has the ability to influence mood, yet so much of the foreground to our streets lacks emotional sensibility.

The craft and the graft of architecture have succumbed to cost-effective, risk averse, quick and generic solutions. Experimentation – the freedom to explore and take risks – is a condition for which people will have to fight in modern society.

Architecture of the future

Architecture faces many challenges. Technological advancement brings with it endless opportunities but we still need to understand and continue the important conversation about how architecture affects us.

What types of spaces will we need in the future? What is the role of architecture as a physical object in the physical world? How do we deal with the crafting of interior space in a world of hybridisation and endless change?

Buildings change over time and so do our attitudes towards them.

Consider the hospital, which was such a familiar piece of urban infrastructure exuding both civic and spiritual meaning. It is now an industrial mega-structure, which will probably, because of its industrial size, resist an architecture of atmosphere and emotion.

Yet the emergence of the Maggie’s Cancer Caring Centres in Edinburgh in 1996 as a counterpoint to these large institutional machines shows a partial alternative. There is now evidence of room for hybrid buildings, existing as a kind of interface between the city, the mega-hospital and the human.

Such a hybrid could bridge the divide between the purely functional and the symbolic and give back the institution a civic architecture of meaning. – Charles Jenks, The Architecture of Hope.

Maggie’s Centres have implications beyond their modest size and origins. Complementary to the large hospital and the huge National Health Service, they present a face that is welcoming, risk-taking, aesthetic and spiritual: and with their commitment to the other arts, including landscape, they bring in the full panoply of constructive means and emotions.

Maggie’s Centres are a model for what might soon become a standard building type – and already discussions are underway about opening one in Melbourne.

We know architecture can create emotions and change the way we experience spaces. Now we need to keep talking about the kinds of emotions we want to create.

Alan Pert is Professor in Architecture / Director Melbourne School of Design at University of Melbourne. This article was first published in The Conversation.