What are Adelaide’s most under-appreciated or under-rated buildings and urban elements?

Designed by Walter H Bagot in 1932, this is a momentous space, deep within the Barr Smith Library at Adelaide University; an historic room where generations of students have studied (and quietly socialised).  One does not have to be an enrolled student to spend time in this inspiring place. There’s a massive room for reading, with rows and rows of oak desks, complete with in-built foot-warmers, to seat 200; a polished linoleum floor; walls with shelves of hardback volumes at the base; venetian-blind-diffused light from the windows above, topped by a vaulted ceiling of complex, gilded detail.

The Barr Smith Reading Room at the University of Adelaide.

Located at the City West campus of the University of South Australia, the Samstag is an unexpected interior oasis at the western end of North Terrace.  It was designed by John Wardle & Associates, and is a free public gallery which not only presents exhibitions of the highest and most diverse calibre, but also offers the visitor an exceptional viewing experience.

Samstag Museum of Art at the University of South Australia.

The expert design of the gallery spaces enables one to view the displayed works up close and from afar; from above and from below; in intimate spaces and in vast openness.  This is no ordinary gallery (if, indeed, there is such a thing).

These offer endless potential as venues for sports, arts, nature and recreation. Unfortunately, far too often they are devoid of life. Carved up by roads and compromised for car parks, they have evolved into places people avoid rather than populate. They are almost leftover land rather than bustling hubs of activity.

Light Square in the CBD.

Unattractive and uninviting bitumen constitutes 37 per cent of Hindmarsh Square, 54 per cent of Hurtle Square and 49 per cent of Victoria Square. Victoria Square was a national disgrace, but within weeks of the council’s redevelopment opening, it is now a success. This needs to translate into investment from other levels of government to support future stages.

Colonel Light established our city squares as places for people, but this vision has been almost forgotten. Our greatest pubic assets must be reinvented as destinations for recreation, communication and collaboration. Creating traffic-calmed environments that invite people to linger longer will be a catalyst for new residential development; it will open up cafe culture opportunities, and provide a canvas for community events and intimate picnics.

Perhaps we need to think “inside the square” rather than get caught in a roundabout argument that is holding back a goldmine of opportunity and impeding the vision set down 175 years ago.

James Cochran’s Blyth Street mural, depicting a city emerging from a person, eloquently portrays the intangible link and dependency that exists between people and place. The growth of a city is determined by its people and the strong connection of parts that make up the city’s physical environment.

The city’s north/south small lanes and roadways are, while not all pretty, underrated and undervalued. This is particularly evident in the connectors between Franklin Street and North Terrace. 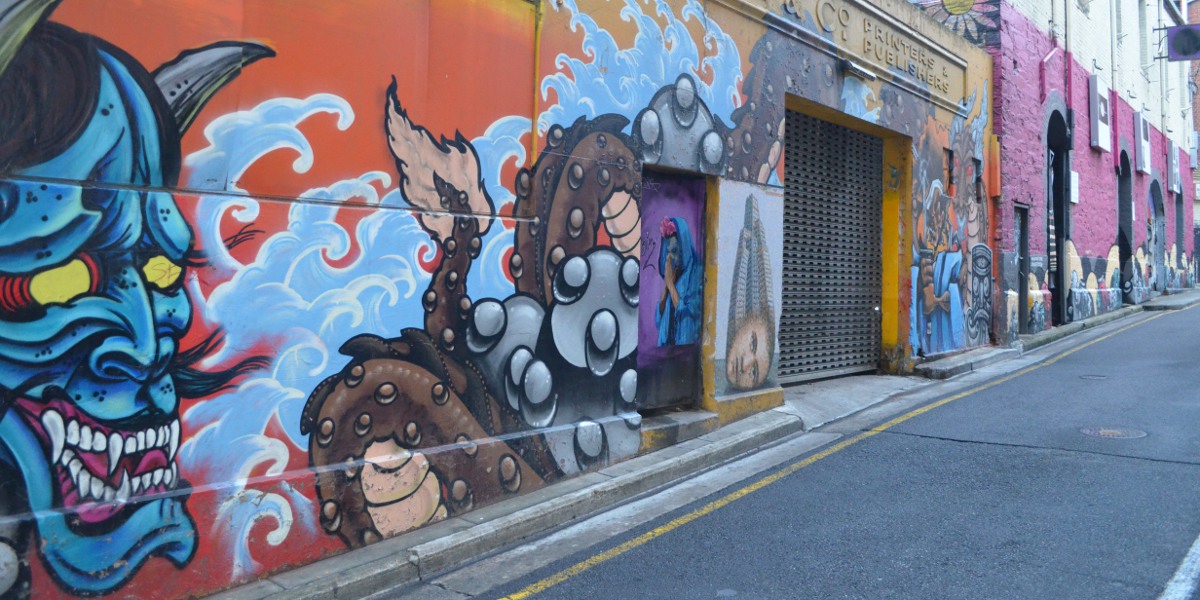 Walking through the minor roadways within the North West Precinct, there is some evidence of change. This area, which was historically been characterised by workers’ cottages and industry, is starting to evolve. Old warehouses are being converted to housing, studio space and even cafes. Small cottages are being demolished and are being replaced with multi-level housing, private, rental and student accommodation within small footprints. Industry intermixes with these to form a rich diversity.

The intrinsic beauty of these streets is their diversity of both usage and people; it is not the physical environment. The gradual regeneration allows the city to evolve over time, building on what already exists without resorting to mass sterilisation and cleansing.

Maybe there are clues in this approach for attracting a diverse group of people and achieving vibrancy in the city.