Peter Barnes’ SAHMRI is not like the building you or I see.

It is curvaceous – fattened, even – and organic. Its innards loom up and writhe and curl. Barnes’ pictures capture Jonah’s view upon entering the whale.

The photographer’s name may ring a bell for readers, having appeared many times in architecture media over the last few years – most often scrawled in tiny text underneath photos illustrating an architect’s latest project.

Here, Barnes discusses the challenges and joys of architecture photography, and falling in – and out – of love with buildings.

So, tell me about photographing the SAHMRI (South Australian Health and Medical Research Institute).

I’ve had two commissions now to photograph the SAHMRI building (architects: Woods Bagot) – the first a small commission for a few photographs from the builder, Hindmarsh; the second a larger commission from Aurecon, the engineers responsible for technical aspects of the facade, the structural design and many of the building’s services. 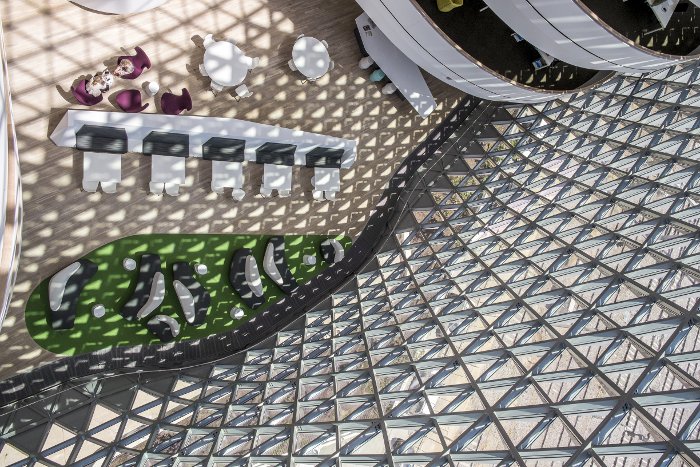 How do you choose where to take the photos from?

By walking around a lot! Starting with the client’s brief, and the list of shots we have worked out, it’s a matter of then finding the best position at the best time of day for each one, and finding other shots we haven’t thought about as the shoot progresses.

I see my job as making photographs that both draw the viewer in and explain what it is they are seeing, so it is a balance between straight documentation and finding the emotion or drama in the scene that will attract the viewer’s attention.  And the best way to do that is to walk around to find what the options are, then choose one or two.

Were there any particular challenges in the SAHMRI shoot?

There are always challenges when you are sent to photograph a building that is still being built. The best exterior shots of this building are still to come – when the landscaping around it is complete and the fence comes down. Inside, we had to work around scaffolding, scissor lifts, floors being laid.

The main challenge, though, is accurately depicting the scale of the two atriums that go from the ground level to the very top of the building; huge spaces that must be photographed from within to describe them. When I was last in there the ground floor of the west atrium was still a construction site, but the east atrium is finished. It is visually the best workplace space I have been in – a large exhilarating space. Pulling together all the elements that make it that way into one photograph is not easy.

How did you get into the field?

I studied photography at what was then the SA School of Art at Underdale in the ’80s – didn’t finish the course, but I did learn the basics of photography, and its history, and how to work a black and white darkroom. Life intervened on the idea of becoming a professional photographer at that stage.

Then I realised, sometime in the early 2000s, that with a digital file and some software I could have the sort of control over colour images that I wished I had back in the ’80s.  Around the same time I travelled to Europe for the first time and discovered how important buildings were to both European history and the modern cultures. And how stunningly beautiful some of the old and some of the new buildings were.

I started to develop an appreciation of architecture. The best photographs I brought back from that trip, and a number of subsequent trips to different parts of Europe, were photographs of buildings.  A few of them were published, and that got me thinking again about the idea of working at photography full-time.

Then when my job at the time disappeared from under me in early 2008, the decision was pretty much made for me.  From there it was a lot of learning, and a process of gradually building up the numbers of the sort of clients I wanted to work for.

What are the unique skills of an architecture photographer as distinct from, say, a news photographer?

There’s a well-known Chicago-based architectural photography firm called Hedrich Blessing. Bill Hedrich, one of the founders, is quoted as saying that the job of architectural photographers is to fall in love with every building they are sent to photograph. You can fall out of love after the shoot, but being able to turn on some infatuation really does help get better photographs. It’s the ability to appreciate the drama and the emotion in a building, and to find the beauty in the banal when necessary, that I think marks out a good photographer of architecture. 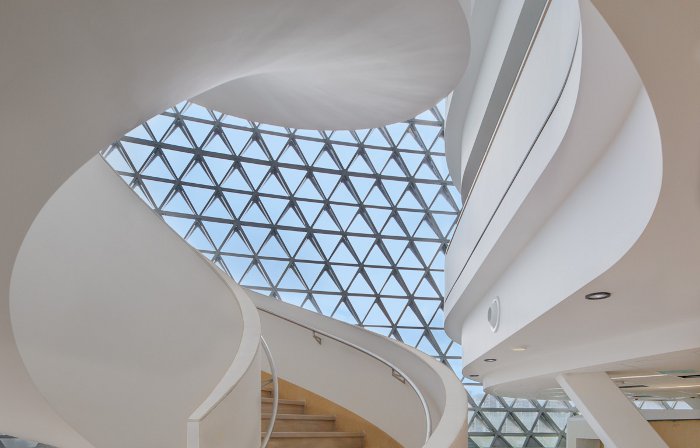 Are there any unique challenges that come with photographing what is, essentially, an inanimate object?

All photography is about documenting the interaction between light and the subject.  Many professional photographers work brilliant magic in their studios, where they have precise control over all aspects of light. Photographing the exterior of buildings is the opposite, closer to landscape photography than anything else, where the challenge is to work out how your subject responds to natural light, and predicting how that response will change with time of day, time of year and different weather conditions.

It’s dealing with the fact that your subject is stuck where it is, the light has to come to it, and you have no control over that; all you can do is be there at the right time pointing the camera in the right direction.   It’s finding that point where nature’s light and the built form interact best that is both the challenge and the delight of architectural photography.

It’s good if my current favourite is the one I’m in the middle of photographing, and maybe a good idea not to publicly compare the work of different clients. I do have a favourite type of building.  One of the things I like most about architecture is that at its best it can be a delightful marriage of brilliant design and improvement of the common good. So I love public buildings that work well to deliver functions that benefit entire communities.