“I feel like bait, even when I’m wearing appropriate clothing.”

When I went out as an observer on the YWCA Women’s Safety Survey on Friday night I assumed I would hear some disturbing statements. This comment from a woman in her 40s actually shocked me. It was 4:30 on a Friday afternoon, she was wearing a conservative emerald green dress and this was how she felt standing at a city bus stop.

Last weekend was the Clipsal 500 and women’s safety around this event is a vexed issue. In 2009 the YWCA tested the concerns of their members by conducting an online and street survey at this time. What they found were 52 per cent of respondents felt unsafe in the city as a result of intoxicated males.

This year the YWCA volunteers were out again finding out if anything had changed in the past five years. Having never been to the Clipsal 500 I too ventured out to try and find out what it was about this event that made it so contentious.

While in the grounds of the Clipsal 500 the words of the woman at the bus stop kept coming back to me. Women in skin-tight dresses, or crop tops and hot pants spruiked everything from taxi services to discounted fuel to Autism awareness. There were also regular beachwear parades, curiously with only one style of bather on the catwalk – the spaghetti strapped bikini.

Jess Davis runs the parade through her company Carpe Diem Productions and assures me all involved are professional models that work across a range of fashions. Does it pay well?, I ask.

“Not really,” says Davis. “We’re hoping that will change next year, besides they treat us really well.”

The show is a blend of singing, some choreography and lots of bikinis. While it aspires to the glamour of Victoria Secrets I could not help but think some moves on stage were more akin to those seen at the Crazy Horse. It did not matter to this crowd; with cameras out and cheers to boot, this was all part of the colour and excitement of the Clipsal 500. 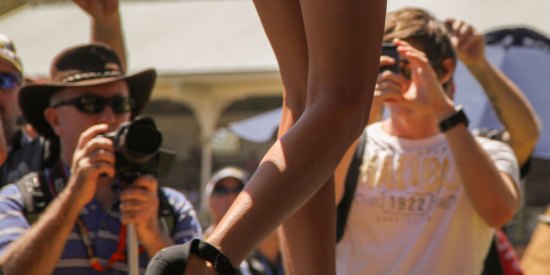 A beachwear parade at the Clipsal.

There was a lot going on at Clipsal and I wondered how necessary it was to use women like this to promote anything and everything. If the organisers took them away would it really change the event?

With almost 84,000 punters going through the gate in just one day, how many were there to look at ‘glamorous girls’? I saw a lot of families there just to watch the race and have fun.

Outside the gates I walk past a woman from Checkmates ‘adult entertainment venue’ handing out two for one beer vouchers. Standing next to a row of parked Police vehicles I ask her for one. She nervously tells me she was told to give them to men only. Is this a busy weekend?, I inquire. It is Friday afternoon and her eyes widen: “We haven’t seen the start of it, it’ll be mad as anything.” 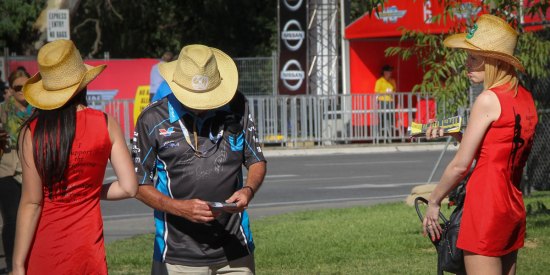 Women from Checkmates hand out vouchers outside the track.

Grace Bellavue is a high-end sex worker who used to work in brothels and strip clubs over the Clipsal 500 weekend. She recalls it being the busiest and most profitable of weekends. She tells me strippers would work 12-16 hours, finishing a night shift as late as 9am. The clientele were transient, booking mostly a half hour session in a brothel or just a lap dance.

“It’s a weekend away with the boys, to get away from the wife and missus,” she says. “(And) you are basically there for entertainment.”

Bellavue now works for herself and chooses not to take on new clients during the Clipsal 500. Dealing with drunk phone calls and unsafe bookings is just too stressful. She claims you can be called to an apartment only to find another four or five men there.

Sharon Jennings from the Sex Industry Network supports the decision of workers not to work over this weekend. They believe a sex worker’s health and safety is the number one priority especially when there is no legal support for reporting violent behaviour to the Police.

“If we had the laws in South Australia (to protect sex workers) things could be very different,” she says.

Jennings has worked in brothels over the Clipsal 500 and in her experience “the closer you are to the track the busier it is”.

As the crowds poured out of the track the number of men clearly outnumbered women on Rundle Street. However YWCA survey volunteers reported that many women were feeling safe. They are in groups or with boyfriends and I derived that if they were feeling unsafe, they would not be out at 10pm on a Friday night.

From the respondents I observed in both the day and night surveys, teenage girls and older women tended not to feel safe in the city during the Clipsal 500. Of the older women, many backed up their fears with stories of being assaulted or harassed. Women are also expressing this same sentiment online and through social media.

The YWCA provides the Women’s Safety Survey online for women who do not feel safe in the city this time of year. By Sunday, more than 250 people had responded with an even amount feeling both safe and unsafe in the city. The vast majority who shared experiences of feeling unsafe during the Clipsal 500 reported intoxicated males leering, catcalling and harassing them.

Today Tammy Franks will be calling on the Minister for the Status of Women Gail Gago to start an email and phone line for women to report this behaviour. She is doing so in response to one of the Minister’s spokespersons saying in last week’s InDaily that, “events like the Clipsal 500 do not make sexual assaults or harassment occur”.

“We know that many won’t report this harassment to police because they don’t think it is ‘serious enough’ or indeed they find it distressing but fear they won’t be taken seriously. Well here is an opportunity for the minister to step up in support of women and their experiences,” she said in a press release.

Over the weekend Premier Jay Weatherill announced the Clipsal 500 would continue for another six years. While the YWCA street survey has concluded their online survey remains open for women to share their own experience of the car race.

Disclaimer: InDaily is not suggesting that anyone depicted in these images were involved in any inappropriate behaviour.