The ongoing extension of Adelaide High School has been influenced by the discovery of the building that originally measured time in South Australia.

While public debate has focussed on school extensions and new sites for Adelaide High, since March 2012 a team of local designers from JPE Design Studio has been working for the Government on a plan to renovate and extend the existing site.

JPE’s design team – led by Adrian Evans, daughter Josephine Evans and Amy Pfeiffer – was asked to design a renovation that respected the 100-year-old fabric of the buildings and the nearby Parklands, while at the same time extending and modernising the school. 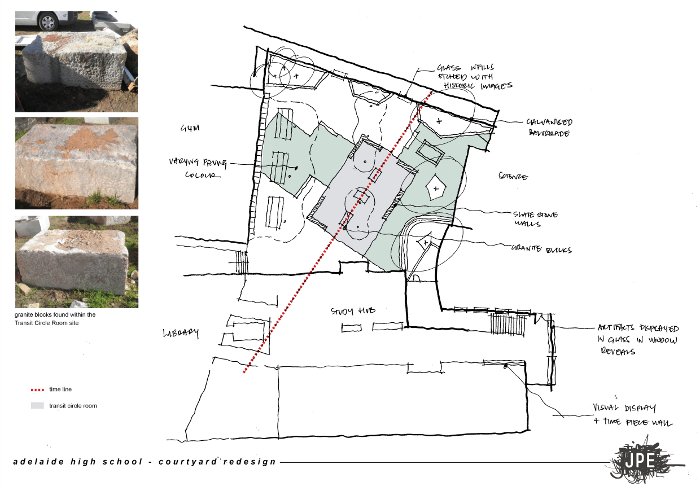 But when you renovate an institution that’s so old, history is bound to impact on your plans.

JPE’s original redevelopment plan included a large new building and two new outside spaces: a plaza between the school and the west Parklands, and a courtyard linking the old and new buildings.

As excavations for the courtyard began, the project team came across three huge and roughly hewn chunks of granite – part of what turned out to be the remnants of a long-buried-and-forgotten building.

Landscape architect Amy Pfeiffer discovered via Australian Heritage Services that the building had been one of a network of observatories which were originally used to determine South Australia’s location relative to the Greenwich dateline in England. They did this by observing the stars, allowing for the time to be set accurately relative to Greenwich Mean Time. 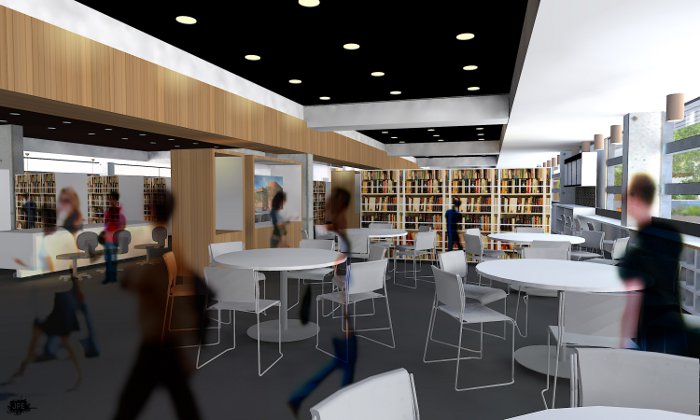 She’s understandably excited about the find and the way it’s been incorporated into the finished build – even though it did require a full re-design of her courtyard space.

The new courtyard incorporates and celebrates the uncovered building by echoing its design. It includes lines and markings which trace out the former floorplan, with old walls becoming seating spaces. The line of meridian – a navigational line used by early navigators to tell time and location – has also been marked out on the new courtyard.

“Three granite blocks have been found on site which were once used [in the uncovered building] to reduce vibration and allow adjustment of the telescope… [and they] are placed in what is believed to be exact location on which they once sat.”

“As an initial conceptual trigger, the radial splay of the new building wing informed the landscape architecture to the front of the school, creating multiple spaces which grade toward the new wing and ground the strong built form, nestling it within the landscape and Parklands.

“The existing school had long horizontal lines composed of brown and cream bricks with rendered cappings to roofs and windows.

“The new wings have slightly darker brown and cream polished-concrete walls with horizontal recessed bands which are continuous around the buildings, including across the window sections, to give a strong linear effect which is sympathetic to the existing school complex.” 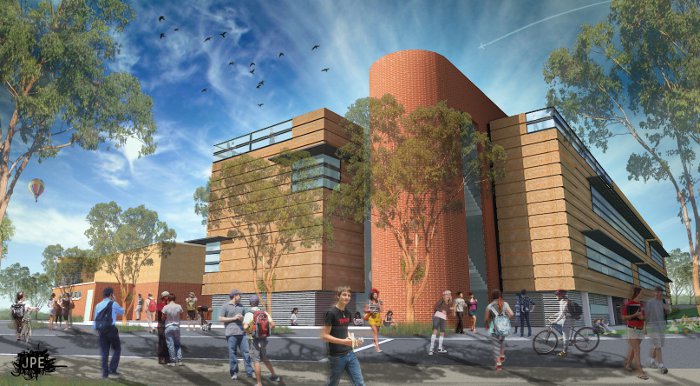 The redevelopment viewed from the south. Photo: supplied

The new building includes a learning centre with a rooftop area which Josephine says offers “amazing vistas” of the Parklands.

“The rooftop space offers group seating, as well as a performance space allowing the rooftop to be transformed for school events and functions.”