The stone at Adelaide University’s Bonython Hall has been weathered by the tides of history. It will be 80 years old in 2016, and age has drawn tight the garbs of tradition and prestige.

Directly across the city at the University of South Australia, David Lloyd’s new Great Hall represents the impertinence of youth. If it takes design cues from the learning centre it will adjoin, expect a slickly-modernist steel-and-concrete-and-glass talking-point. The huge tower of student accommodation that will rise from its centre is a bold middle finger to tradition.

Vice Chancellor Lloyd’s university will never be a sandstone. And that, he tells InDaily, is its competitive advantage.

“Anybody who’s seen what we’ve done over the last year knows it’s going to be different,” Lloyd said. “UniSA needs to be UniSA. Our positioning and our feel is about a place which is relevant to employment, which is relevant to society. I’ve no ambition for us to be a sandstone.

“We’re not … a dyed-in-the-wool sandstone institution. It’s an institution that is innovative, that is open to ideas and where there are opportunities to be taken it actually makes the most of them.”

Lloyd speaks quietly and quickly, with few verbal tics and a neat Irish accent. He arrived from Dublin’s Trinity College –where he was bursar and director of strategic innovation – a year ago, and has moved swiftly to put in place a capital works program that will establish his legacy.

Barely half way through his first year he rolled out a new five-year strategic action plan which called for a new cancer biology centre (slated to go next to the new RAH) and the aforementioned great hall. Together with a program of works across the university’s four separate campuses, by the end of 2014 a big chunk of capital will be committed to the new VC’s vision.

It’s part of Lloyd’s plan to take the university from rookie to fast riser. One year in and he’s starting to see the staff culture fall in behind him.

“We’re slightly more confident. What I’m seeing coming up to me are people with ideas who may not have spoken up before. There’s a confidence about the place

“We’re not just a new university in Adelaide, we’re actually a university that has global reach, that has significance at state level, but [also] nationally and internationally.”

“I came [here] because I could see potential. An institution which was on an interesting trajectory,” Lloyd says.

“The resources that the institution has, in terms of both the physical landscape, the physical infrastructure, the catchment in terms of first preferences … and yet it wasn’t really screaming out loud that it had all these things in place. A lot of it was light under a bushel.” 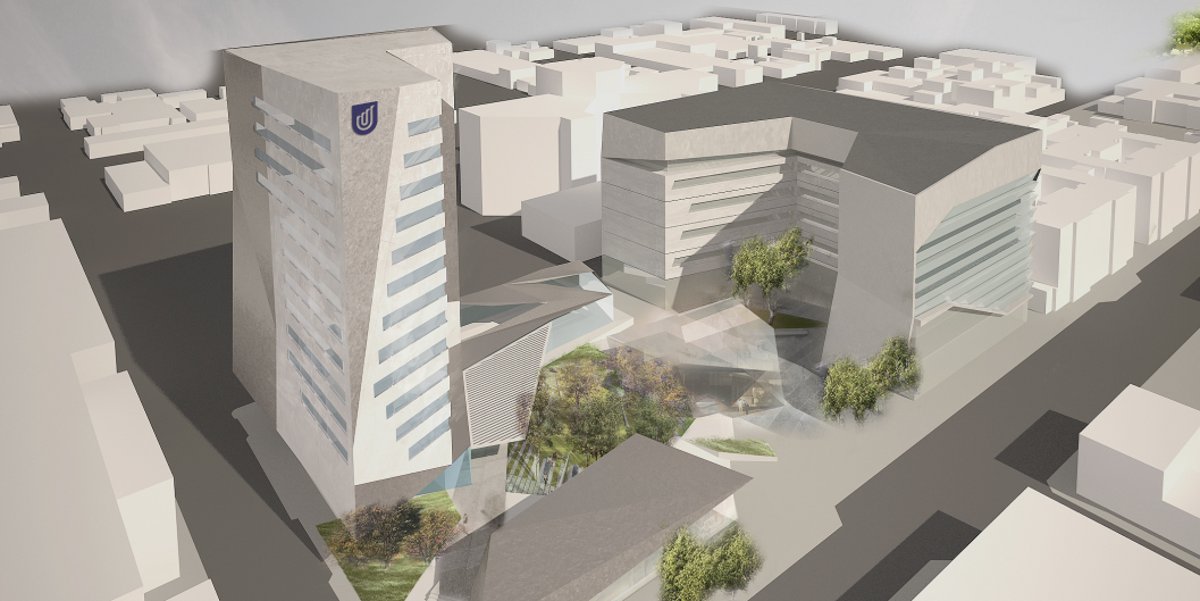 The University of South Australia’s new Great Hall is underneath the tower on the left of the image. The tower will contain student accommodation. The building on the right is the existing student hub on Hindley St. Photo: Woods Bagot / supplied.

If Lloyd’s goal is to get his university playing in the big leagues, his success at shifting culture will be vital – he’s facing a significant cultural cringe.

UniSA has for a long time been, if not the poor cousin, perhaps the less sophisticated sibling of the state’s two big unis, Flinders and Adelaide.

The University was born out of the amalgamation in 1991 of the South Australian Institute of Technology and three campuses of the South Australian College of Advanced Education. That, and its strong commitment to getting students from disadvantage into tertiary eduction, has led to an unflattering unofficial nickname – SuperTAFE.

“The SuperTAFE thing is a funny one,” Lloyd laughs.

“We were doing the merchandising (the university is about to start stocking a range of UniSA-branded clothing) … one of the designs that came up was the Superman logo with SuperTAFE underneath it.

“And that’s not a bad thing – origins are origins. It’s not a conscious kind of drive to say we’re going to put our origins to one side.

“What we’ve got to now is a place where everybody’s talking about the university. It’s the whole institution – that’s good, that’s a maturity piece.”

For a large university – 33,674 students, compared to 20,088 at Adelaide and 18,010 at Flinders – with a higher-than-average cohort of students from disadvantaged backgrounds, the change to demand-driven funding has had surprisingly little impact, Lloyd claims.

Many universities nation-wide responded to the Federal Government’s uncapping of university places by dropping their entry scores, allowing them to dramatically boost their enrolment. That didn’t happen at UniSA – and the new man is an outspoken critic of the system.

“The biggest criticism that I have of a demand-driven system is that it’s driven by student demand, which is barmy. It should be measured on outcomes. Are your students in jobs? I can take in a million people if you want; let’s drop the ATAR to 1 … and see a 99.9 per cent completion failure. We’d bank a whole lot of money in the first year, but it doesn’t make any sense.”

Under Lloyd the university is trying to go in the other direction. When he arrived he ordered a report looking at the university’s distribution of places in courses versus the actual demand for graduates; courses that take more students than there are likely to be jobs will slowly see their numbers cut back over the next few years.

“We’ve been trying to tone down anything which is ‘people want to do it but there ain’t going to be a job’. I think you’re doing people a disservice.

“Ultimately over time our own offerings will get to a situation where we’ll offer three-year programs where you can offer whatever you want, but the two-year practice qualification, employment-relevant masters piece will come in, and that springboard into employment will come from a three-plus-two piece. So you’ll have an exit if you just want to come in and get the foundations of psychology… but you want to be a practitioner, you’ll need to get a masters. And that takes time because that’s a big institutional shift.” 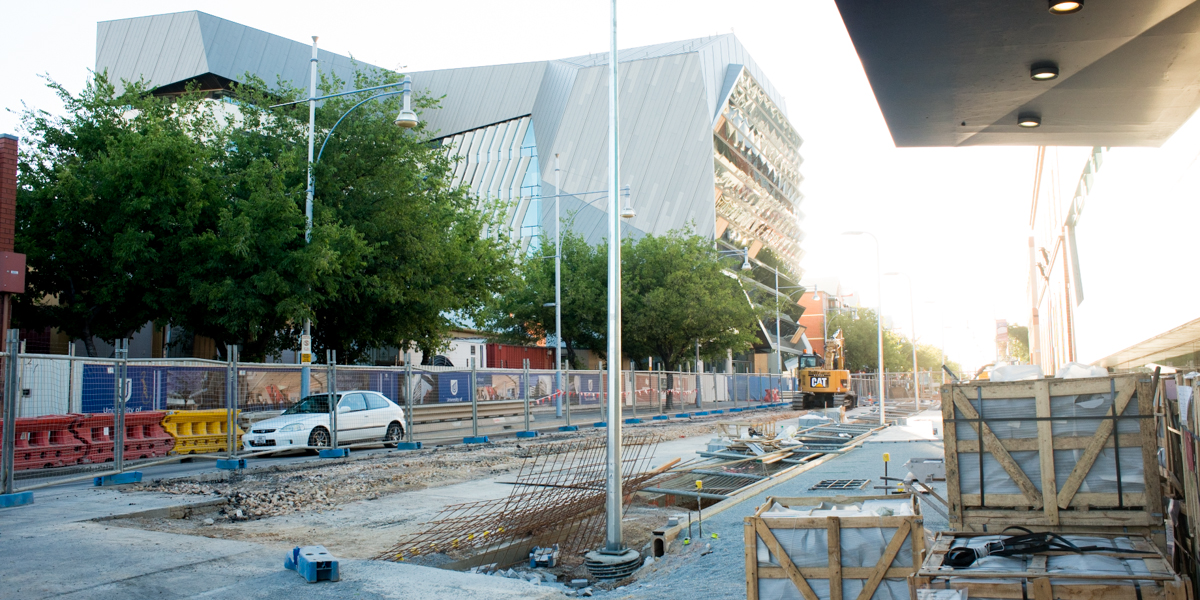 It’s an odd position for a university to hold – turning away customers willing to pay. But Lloyd’s criticisms of the status quo are broader – the Irishman favours a move back to a regulated environment.

“The worst case is you say here’s a pot and we’ll squeeze as many people as we can into it. And then the available funding per student goes down and down. I’d rather see an envelope which said this is a funding envelope for your university, now let’s enter into an agreement as to what your student population is going to look like.”

Lloyd does admit to fears over political risk. When tight budgetary times come to Canberra higher education funding is always a worry for a VC. While he’s unwilling to swell enrolments via dropping entrance standards, he is keen to achieve income diversification – and he plans to find it offshore.

The university’s footprint in Asia will significantly expand in the next few years, he tells InDaily, with the foreign bases to have a focus on enrolling and teaching students. That will mean the percentage of upfront-fee-paying international students – customers bursars view as exceptionally lucrative – as part of the uni’s cohort will rise from 21 per cent to around 30.

“Income diversification is a priority on every VC’s mind because in the system we have you’re exposed to budgetary whims from Canberra. But you can’t damage your brand.

“There’s no bottomless pot of money to fund the demand driven system. Sooner or later somebody’s going to say the pie is so big and no bigger. That means that people will start to trim things back. Institutions need to be ready to deliver the same with less.

“Up to last year for most of the sector it was year on year on year increases in expenditure. This year … we’ve said we expect the same service with the same budget as last year. Which means that people just have to suck it up. and then there’ll come a point where we’ll say there are things we can’t deliver, but I’m loathe to cut anything that directly effects students, so we’ll look everywhere else before we deal with frontline.”