The architect behind the Festival Plaza admits its design hasn’t worked – but he still dreams of it becoming Adelaide’s central public space.

It’s always difficult for an artist to critique their own creation. They become attached to it, invested in it, and such investment lends a film of mildew to the critical eye.

Some believe time is the best treatment. American photographer Garry Winogrand, for example, wouldn’t process the negative of a photo he’d taken for a year, to give himself the emotional room to asses it objectively.

Lu Balsamo has recently retired after a glittering 40-year career with HASSELL. He worked on the Adelaide Festival Centre and Plaza’s design teams almost four decades ago.

In the time since, Balsamo has had a chance to reflect. He knows what went wrong with his creation. But more importantly, he believes it’s nothing that can’t be set right.

“There’s no reason to go there – that’s the biggest issue,” he tells InDaily Design.

“If you had kiosks, if you had formal entry to the theatres, if you had booking halls … once there’s activity, people will go there. If there’s nothing there, then people won’t go there.” 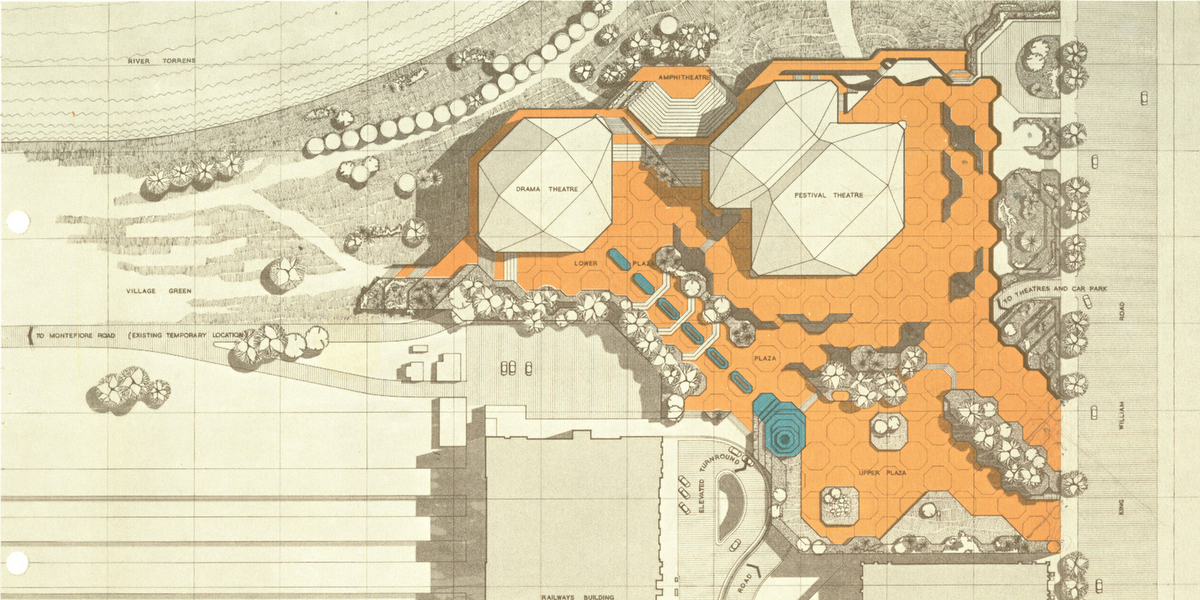 The original AFC Festival Masterplan, which crucially linked the Plaza and Centre on one level.

The problem, Balsamo believes, is the separation between the Centre and the adjoining Plaza. A renovation split the two with a large gulf that drops down to the access road below, and moved the entrance to the theatres to the basement level.

When he designed the Plaza, he envisaged it coming alive whenever there was a show on; patrons could mingle before and after the show, eat at food stalls.

The Plaza is built on the thin concrete roof above the Centre’s car park. But the design of the Centre means the Plaza can be avoided by anyone who drives to the car park – they walk back along the road to the Centre’s basement entrance.

Balsamo says that could be addressed by having lifts from the car park taking people straight up to the Plaza. The Centre would be joined to the Plaza by building a roof over the road, creating a single space with new entries to the Festival Centre theatres on that same level.

His solution – which is contained in the Festival Centre’s masterplan – is architectural, but it’s also about people: if you get people on the Plaza, their presence becomes transformative. Suddenly commercial activity makes sense; the plaza becomes full of food trucks, musicians and other performers.

“The idea was always with the tank traps and the City Sign (Hajek’s sculptures), they were things that were fixed. But with clever theatrical thought you could use those things to advantage – you might use them in a set, you might use them for people to sit on.”

A revamped Plaza could finally fulfil Balsamo’s original vision. More than that, it could provide the city with something it currently lacks – a central meeting place along the lines of Melbourne’s Federation Square.

“There is no central meeting place in Adelaide,” Balsamo says.

“Even Victoria Square doesn’t get used that way. You need one big space where if the Crows win a grand final, you could have 15,000 people sitting on the Plaza watching the match.”

He admits there is another flaw with the current design – it features too much concrete and too little shade.

“The big criticism always has been … in very extreme temperatures, it’s a very hot position. That does, to a certain degree, restrict how it has been used.”

When Balsamo originally designed the Plaza, he had plans for dealing with the heat, but they were knocked back because of budget constraints. Since then, nothing has been done to address the lack of shade.

“It was just a limit in the budget. I did schemes to put up some tent-type structures on the Plaza to try and mitigate against the heat.

“So it was just left as a reflection of what South Australia was about – it’s a hot, dry climate. We should celebrate that, to a degree, and allow things to happen there that allow their own shade when the function dictates that is what’s needed.

“[But] it’s a funny balance. I think in the past people thought that way. Nowadays you’d say it would really make it more useful if it was covered in some sort of way.”

The Festival Centre is currently the site of much political intrigue, with the Opposition recently announcing plans for a revamp and the Government holding its cards close to its chest.

Balsamo says whoever ends up winning the election in March has a responsibility to the Centre, and to the city.

“I think since [it was built] both sides of government have really rested on their laurels a bit and said, ‘We’ve got this fantastic reputation of a great arts centre, a fantastic festival of arts’. And yet they’ve never supported really good maintenance and redevelopment of the theatre complexes, hence the Plaza’s suffered, the car park’s suffered.

“It’s aged very well, but all buildings need to be maintained. It was built in an era when things were done certain ways – now things have moved on.”