“I can remember when the die was cast and the decision finally taken, Menzies sat back in his chair and just looked around the table and said; ‘There comes a time in the life of any government where it just has to make decisions which it believes are in the best interests of the country, even if they believe they are committing political suicide.'”

Jim Forbes is the last surviving Liberal Party MP from the Tenth Menzies Government Ministry that introduced national service into Australia in 1964.

As Minister for the Army, and a retired army officer with a Military Cross for bravery, he brought the policy to the Cabinet table, overriding a recommendation from Defence’s Chairman of the Chiefs of Staff.

Fifty years on – and almost 40 years since his last media interview – he told InDaily he stands by his decision.

He’s just turned 90 and family from all around the globe have returned to Adelaide for a week of celebrations that included Christmas.

Some of his children were born after the national service decision – the grandchildren and great-grandchildren would perhaps know little of the drama that surrounded Australia’s increasing commitment to the war in Vietnam and how the Army would be resourced.

READ MORE OF OUR THREE-PART SERIES WITH JIM FORBES:

Forbes on Menzies, Keating and the deportation of Joe Cocker

Forbes’ still drives; he plays golf three times a week and as former Prime Minister John Howard recently noted, his perspectives of the period are invaluable.

He’s a large man; a strong man for 90; a forceful, yet gentle persona.

We’d already spent some time on recollections of his own days as a soldier, holding out the Japanese in dense jungle in Papua New Guinea..

His military service had been followed by academic pursuits including a later scholarship to Oxford.

The University lecturer and family man had made a considered move into politics; “one thing followed another”, as he put it.

I felt nervous asking him how he viewed a decision that sent so many young men to Vietnam – and to their deaths.

“History is best viewed in the context of the time in which it happened,” I ventured to Dr Forbes, “and you were there.”

Perhaps there was no better qualified person than Forbes to propose a national policy of conscription.

The son of an Army officer, he’d enlisted at age 16, graduated from Duntroon at age 19 and saw active service before he was old enough to vote.

In the early 1940s he was in Darwin when it was still under attack from Japanese aircraft. 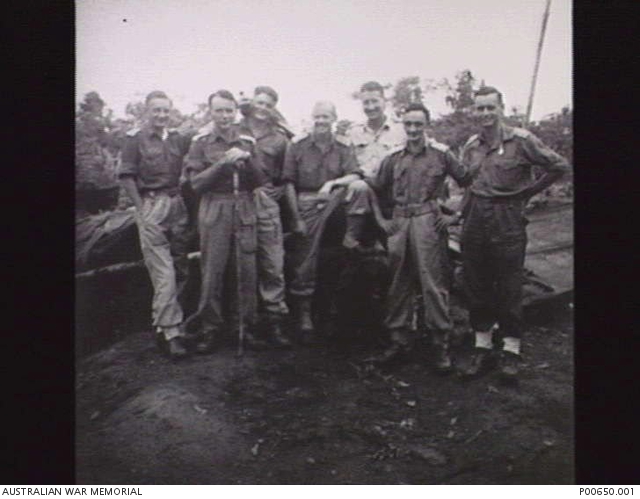 Shortly after the then-20 year old Jim Forbes was part of the 2nd Mountain Battery, hauling four American 75mm pack Howitzers in the jungle around Bougainville in Papua New Guinea.

“We were in a very tight position in what used to be called the Genga River on the north coast of Bougainville, and we’d had some pretty bloody clashes with the Japs and we were dug right on the edge of the river, trying to hold them,” he recalled.

“They had some very good Japanese marine units and they were more than a match for us.

“The role of the battalion I was with was to attempt to hold the ground while we got reinforcements.

“We were in a defensive position I had to do all sorts of funny things like climb trees in dense jungle or wade out into the sea to try and get a look at the Japanese positions so that you could direct the guns.

“So I did a lot of this by either hanging on like a monkey up a palm tree or up to my neck in water out at sea.

“I wasn’t conscious of anything heroic about it. As far as I’m concerned I just did what was required without thinking about it.”

Twenty years later he had plenty to think about.

Australia had made firm commitments to assist the USA in its war in Vietnam, but a resource-stretched Australian Army couldn’t match the political commitment.

“Vietnam’s situation was a real threat,” he recalled as we sit in his Adelaide home, surrounded by hundreds of politics and history books and a rack of leather-bound Hansards that record his 19 years as federal MP for the South Australian seat of Barker.

“The conflict with Indonesia, the emerging threats in Asia and south-east Asia were real.

“The problem was principally a manpower one.

“It became apparent that we would have to increase the strength of the services if we were going to be able to meet our commitments.

“As Minister for the Army I had been able to persuade Cabinet to override the objections of Treasury to improving pay and conditions for the Army quite markedly … but it didn’t have much effect on enlistment, other than end the increasing rate at which we had been losing officers.”

Paul Hasluck, later a Governor-General, was Defence Minister in 1964.

“Hasluck had asked for proposals on how to get the manpower.

“As I later discovered, the Chiefs of Staff Committee threw out the proposal for conscription because they thought the politicians would lumber them with a universal scheme and they didn’t want that.

“This drained the resources of the Army because they  had to do so much training. So I came up with a selective scheme.”

What happened next at the Cabinet table defined the future of thousands of young Australians. Cabinet agreed on a system of selecting numbers from a barrel – the number representing a date that made a young man’s birthday the defining criteria of whether he went into national service or not.

The Defence Department’s Chairman of the Chiefs of Staff had proposed to Cabinet that “we at least have one more go on improvement of conditions of service and a publicity campaign and all the things which had been tried in the past and hadn’t worked,” Forbes recalled.

“I leapt in at that stage and said; ‘I have to make it clear Mr Prime Minister, that I can’t agree with the Minister for Defence. We will not get the men and the Army cannot perform its function in the time scale that the Cabinet is requiring unless we do get more men and there is only one way we can get them in that time scale and that is be selective conscription’.

“I can remember when the die was cast and the decision finally taken, Menzies sat back in his chair and just looked around the table and said: ‘There comes a time in the life of any government where it just has to make decisions which it believes are in the best interests of the country, even if they believe they are committing political suicide’.”

Menzies was about to turn 70.

He’d been Australia’s Prime Minister at the start of the Second World War, declaring to a nation of just seven million people in 1939 that: “It is my melancholy duty to inform you officially that in consequence of a persistence by Germany in her invasion of Poland, Great Britain has declared war upon her and that, as a result, Australia is also at war.”

It came at a huge political cost and Menzies and his United Australia Party lost his majority in the 1940 election and he was forced to resign in 1941.

He later re-grouped under the banner of the newly-formed Liberal Country party Coalition and reclaimed government in 1949, holding the Prime Ministership until 1966.

On this day in 1964, the seasoned Menzies knew the political storms ahead.

The much-younger Forbes would later see them unfold.

“More than any other person, I had been responsible for persuading Cabinet that they should introduce this scheme. It was the right decision.

“It was never terribly popular but it was a very fair system and I had to take the burden for that.

“It never worried me … because I was completely convinced that we had to do it and it was a very fair system.

“A lot of people mocked the idea of putting marbles in a ballot box … but it was a lot better than the system used in the US for example where people of wealth and influence could keep their sons out of the draft.

“It was very Australian way of doing it and we never got the credit for doing it.

“People got knocked off in Vietnam and it became very unpopular.”

As Minister for the Army, it was Forbes’ responsibility to look after the National Service recruits, or “nashos” as they became known.

As a former Army officer he moved to make sure they got what they needed.

“It turned out it was very good for the Army. Its pre-war barracks had not been maintained or improved since the Second World War because of various economic restraints,” he said.

“Now, the Army realised that Government was edgy enough about introducing national service without the added risk of facing accusations that the conscripted soldiers were being put into inferior accommodation.

“Treasury resistance was brushed aside and substantial building programs took place, including training establishments such as Kapooka and Puckapunyal.”

Conscripts were obliged to give two years’ continuous full-time service, followed by a further three years on the active reserve list.

The full-time service requirement was reduced to eighteen months in 1971.

It would have ended in 1969, except that the ALP had engineered a way to lose the election despite popular opposition to conscription.

Forbes says the Coalition Government’s eventual defeat at the 1972 poll was more about the decline of the party under Billy McMahon than the issue of conscription, which had been more powerful in 1969.

“It wasn’t a defeat of conscription.

“We would have lost in ’69 if it hadn’t been for the DLP split and divisions in the Labor Party.

“In 1972 McMahon lost because he was out-campaigned by Whitlam.”

Of that number, 19,450 National Servicemen served in Vietnam, all with the Army.

After that decisive day in 1964, for Jim Forbes, political and family life would continue apace.

Some of his five children were born during his eight and a half years as a Minister.

He would serve under five Prime Ministers – Menzies, Holt, McEwen, Gorton and McMahon – and did battle across the chamber with Labor Prime Minister Gough Whitlam.

When he left politics on 11 November 1975, it was a vastly different society.

Tomorrow in InDaily, Forbes talks about the fundamental shift in  health policy that resonates through the political context today.

He also reveals his thoughts on the seven Prime Ministers he knew so well and why Sir Robert Menzies is a stand out.

*This story has been made possible with the time and cooperation of Jim Forbes and his permission to access papers held in a private collection by the National Library of Australia.