It’s been more than 100 years since a tropical cyclone has pushed deep into South Australia, meterologists say.

The state’s unusual weather – extreme heat in the north and up to 30 degrees cooler in the south – is the result of ex-tropical cyclone Christine retaining its structure as a low pressure system.

“It’s only been four or so times in the last hundred years that a cyclone has held together as a low pressure system and crossed all the way into SA,” Weatherzone meteorologist Brett Dutscke told InDaily.

“There were a couple in the ’80s and ’90s from the top of Western Australia but they fell away just as they made it to the Great Australian Bight.

“The then un-named cyclone of 1907 was the one that came furtherest into SA until this one.”

The 1907 cyclone crossed at Cooktown in Queensland, travelled to the Gulf of Carpentaria and then came directly down into SA, hitting Moomba. 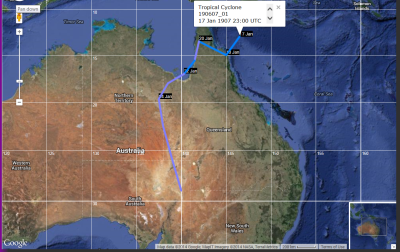 Dutschke said more recent cyclones that had retained their structure as a low pressure system included Gertie in 1995, Annette in 1994 and Billie in 1986.

“In each of those cases they made it as far as the Bight before weakening.”

Christine’s push south has been caused by a system of very hot air in central Australia.

“It’s rare for a cyclone to coincide with such a hot air mass,” Dutchske said.

“The hot air mass has allowed the low presure system to stay intense.”

The mercury at Tarcoola in SA’s far north hit 48.9C on Wednesday afternoon, while the low pressure system brought much cooler conditions in Adelaide.   Temperatures are forecast to hit 48C in Oodnadatta and elsewhere in the north again today.

Adelaide’s temperatures are forecast to be about 23C all week.

Ex-Tropical Cyclone Christine will continue to move south-eastwards and slowly weaken as it continues across South Australia today and into New South Wales on Friday.

The Bureau of Meteorology forecast for today is for patchy rain south of about Port Augusta to Renmark, increasing to rain areas in the far west and about Kangaroo Island, and parts of southern Fleurieu Peninsula and the Murraylands. Mild to warm temperatures are expected about southern coastal districts, grading to very hot in the north with extreme heat persisting in the far north-east. 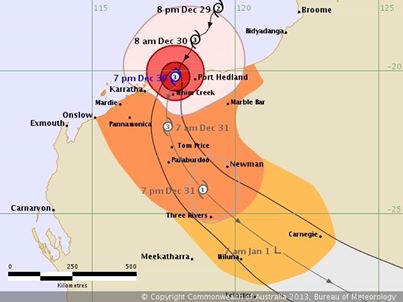 How Christine started its move into SA