After controversially cutting funding for aerial shark patrols, the State Government says it will look at using unmanned drones to spot the marine predators instead.

The Government also admits there’s only “limited evidence” for the existing patrols’ effectiveness, after InDaily yesterday covered research indicating the patrols may pick up as few as one-in-ten sharks in an area.

The Sydney Morning Herald is reporting this morning that the NSW State Government is working with university researchers to look at drone technology for shark patrols.

“I believe the idea has merit and we’ll be looking with great interest at the work that’s being done in NSW,” he said.

Drones – unmanned aircraft that are remotely piloted from the ground – are an emerging technology and pose all sorts of policy and regulatory questions for governments around the world.

Perhaps most controversial is the American Government’s heavy reliance on armed drones in conflict theatres in the Middle East.

Drones can carry advanced sensor packs – including high-resolution cameras and radars – and can stay airborne for long periods of time, which may be useful for spotting sharks.

The State Government is under fire from Surf Life Saving South Australia after a decision to cut $140,000 from helicopter shark patrol funding. The program’s total budget in 2013/14 is $362,000.

InDaily reported yesterday on new research showing the patrols pick up as few as 12 per cent of sharks in a given area – a finding the Life Savers reject.

O’Brien admitted there was only “limited evidence” of the patrols’ effectiveness, but said any cost to make things safer for the public was worth bearing.

“While there is limited evidence available regarding shark patrols, many states utilise them as one method of reducing the risks to swimmers along our coasts during summer.

“The gulf waters in SA are generally much calmer with less surf than on the eastern and western coasts of Australia and are therefore well suited to spotting activities from aerial platforms.

“Any reduction in risk to SA beach goers and increased public confidence during summer is worth the expense, and the fixed-wing contract which provides greater coverage is the best option for taxpayers.”

Two different sets of data tell wildly different stories about the effectiveness of the patrols.

The State Government’s data, collected through the Department for Primary Industries and Regions, says that aerial shark patrols have spotted only 28 sharks since 2008 – far fewer than the number reported by members of the public.

However, Surf Life Saving South Australia says it is not part of the department’s system and therefore the figures are not accurate.

Its data, provided to InDaily, says the patrols have spotted 340 sharks in the same time period – an average of almost 70 a year. 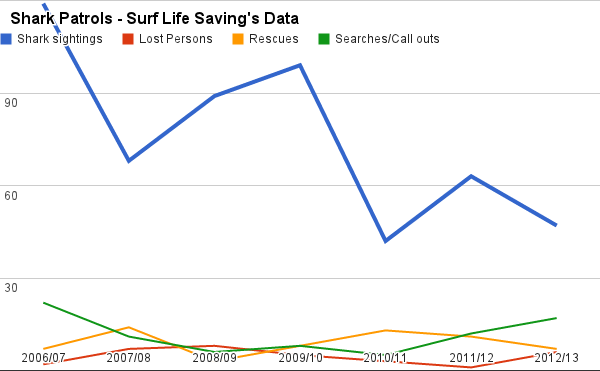 In a letter to the editor published today, Surf Life Saving SA State President John Baker defends the effectiveness of the patrols.

“We note the research is not based on our service here in SA because we do have crew who are trained for this purpose,” he said.

“For this reason we disagree with the findings being applicable to all services and operations. There is no doubt that sharks may be missed if outside the visible area or in murky waters and we cannot be everywhere, but at the same time a significant number are sighted and are herded to sea.

“We are a rescue service and coastal surveillance operation and the more times we are in the air as a multi-use service, the greater value we can be.

“Our helicopter crew are amongst the most highly accredited surf lifesavers in the State and could be considered “professional” volunteers.

“The value of a life is far greater than the expense that is spent on saving them.”