Public art shouldn’t just be striking and provocative, it should seek to capture the interest and sympathy of a large proportion of the relevant population.

Public art enjoys a privileged status: it gets to live in a place owned by the public. It should therefore be a given that it must connect with the wider community in a positive way

It seems like public art is all over the news. While the City of Darebin ponders the future of its new installation in Westgarth (see Public art: does context matter?), Fairfax journalist Shane Green wants to reinstate Melbourne’s controversial Vault sculpture in the City Square (Should it be back to square one for the Yellow Peril?).

The work, formally titled Vault, was created by Ron Robertson-Swan, who won a competition in 1978 for a sculpture for the then newly completed City Square on the corner of Collins and Swanston streets. It generated criticism even before it was completed and was quickly dubbed the Yellow Peril by the media. 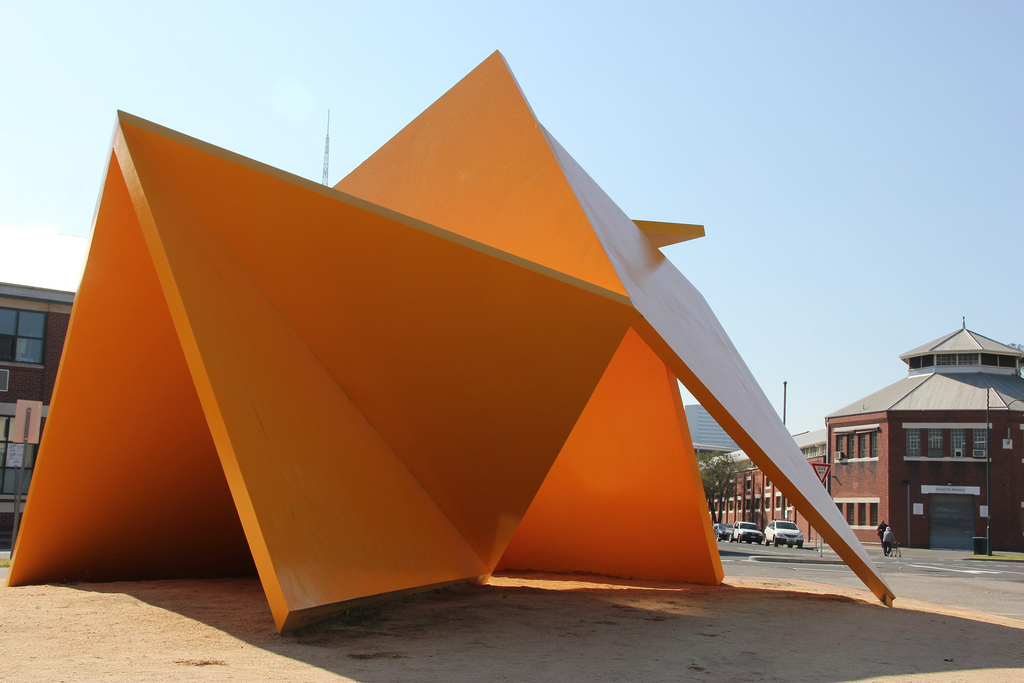 It was installed in May 1980 but relocated to Batman Park by the end of the year. In 2002 it was moved to its present home on the forecourt at the then newly opened Australian Centre for Contemporary Art.

Green reckons the controversial art work remains “a striking piece” which is “distinctive and still challenging”. He says it should be returned “to its rightful place: the City Square”. There would no doubt be a vigorous public debate, he acknowledges, but that “is exactly what public art should provoke”.

I’m glad he’s written this because to my mind it crystallises some important issues around the place of public art in contemporary cities.

Public art enjoys a privileged status: it gets to be put in a place owned by the public. More than that, it’s not confined within the walls of a gallery, public or private. It’s put in a place where, like outdoor advertising, people passing by are obliged to see it. Moreover, it’s not there for a limited showing but is usually intended to be permanent.

It might sound like a tautology, but to justify such privileged treatment it should be a given that public art must “connect” with the wider public in some way. Sometimes that connection might come from the significance of the subject matter – eg a memorial relating to a highly charged event that the community agrees is important, or a tribute to a significant person.

Or it might come, as the City of Darebin has (mostly) shown with its public art program, from wit, humour and whimsy. Most people “get” and appreciate eccentricity, quirkiness and flights of fancy.

Of course nothing will appeal to everyone, but public art should seek to capture the interest and sympathy of a large proportion of the relevant population. That, it seems to me, is the implicit contract the community has with exhibitors of public art.

The artistic attributes of Vault might be meaningful to some of the “Arterati”, but such a formal and abstract work has few of the qualities that suggest it connects with any more than a minuscule fraction of its supposed audience, ie the people of Melbourne. Indeed, I doubt it was ever meant to be “public” in any meaningful sense.

It’s true the City Square was the intended site for Vault, so there’s certainly an historical connection there, albeit one notable more for controversy than artistic merit. But the association is weakened by the fact it lasted less than a year.

Since then the City Square, which was always a difficult and unloved site, has changed considerably (part of the site was redeveloped for a hotel) and its hoped-for but never realised civic role has been taken up by other places such as Federation Square and Birrarung Marr.

Vault is a very formal and abstract work that doesn’t relate well with the public at an emotional level and has nothing to say intellectually to a contemporary public. It would be better, I think, to leave it at ACCA where it should find a more appreciative and informed audience.

No doubt there are some who find Vault visually arresting, perhaps even absorbing. Personally, I think it’s trite and always was. Against the bustling street life off Melbourne in 2013, its banality would be even more obvious.

I suspect it belongs to a time when public art like this was valued by its supporters in large measure because it signalled a city’s cultural sophistication. Of course it really betrayed an insecurity about the city’s place in the big wide world. Those days are gone; we don’t need to pretend we’re sophisticated anymore.

I also don’t agree with Green’s proposition that vigorous debate is “exactly what public art should provoke”. I know it’s a common meme and perhaps it’s appropriate for art in some contexts, but I don’t think it should be the purpose of public art, much less the justification for it.

Public art should be about reaching into the community. It should be inclusive, not calculated to shock, offend, bewilder or generate hostility. That might be OK in a gallery and it might be acceptable in an ephemeral medium like film, but not somewhere that’s public, permanent and can’t easily be avoided.

Public art will give much more to a community if it’s understood, appreciated and welcomed by most members. That will provide much more value than any artistic debate engendered by a self-consciously controversial work.

This article was originally published on the Urbanist blog on Crikey.