In an unobtrusive black two-storey office on Fullarton Road with windows tinted so dark no light gets through, Family First candidate Bob Day – along with good friend Cory Bernardi – is running South Australia’s conservative movement.

“This is the conservative hub of Adelaide,” Day says with trademark chipperness, as he tours InDaily through the building’s conservative library, which occupies a fair chunk of the lower level.

The library has a lectern and several rows of neatly-spaced chairs. Conservative authors often do book signings in here, many of which are MC’d by Bernardi – who also has his own mini-television studio out the back, where he records Cory Bernardi TV.

A sign on the wall lists Family First’s eight cohabitants in the centre, including The Samuel Griffith Society (dedicated to upholding the constitution); The Conservative Leadership Foundation (“something that Cory Bernardi started”); and the Australian Taxpayers Alliance which runs the conservative online website, Menzies House.

Welcome to the Bert Kelly Research Centre – the name Day has given the complex. It’s named after a former Liberal member, Bert Kelly

Day has used this building – and his considerable financial resources – to assemble a carefully curated constellation of South Australia’s most conservative organisations. 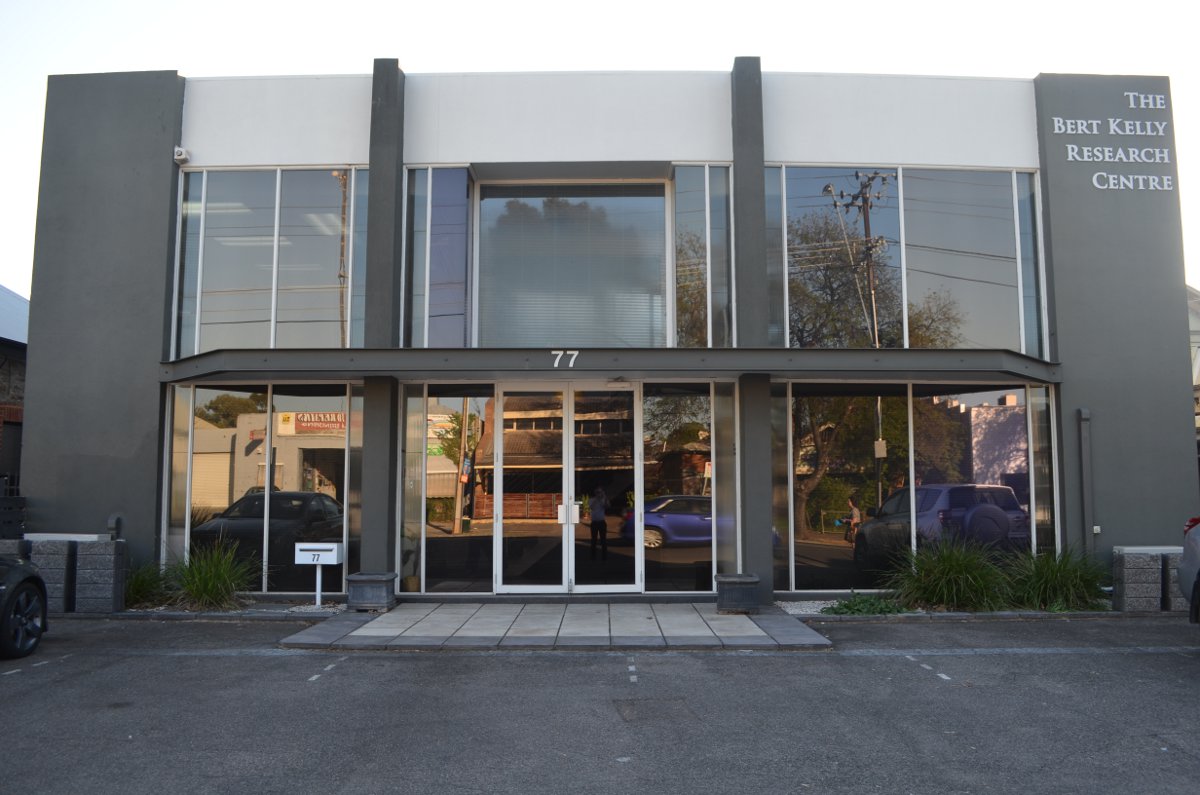 This is Day’s fourth run at parliament, and this time he stands a real chance of getting in.

“There is every prospect of a minor party picking up the sixth senate seat in South Australia,” Adelaide University political expert Clem Macintyre says.

“Small variations in the primary votes for the major parties, for Xenophon and for the minors, under some scenarios can see Family First elected. I think probably the most likely outcome is still the Liberal party winning that sixth seat, but no guarantees.”

Day first ran for the Liberal Party in the Federal seat of Makin in 2007. He threw out the Liberal party’s strategy textbook and ran a campaign flavoured with live music performances – and saw a big swing away from him, handing Labor the seat.

Day then lost a preselection battle to Jamie Briggs for Alexander Downer’s old seat of Mayo – despite an endorsement from Peter Costello – and promptly quit the party.

“There’s a small group of people that control both parties, and you’ve got to gain the favour of the powerbrokers in order to get into safe seats,” Day tells InDaily.

“Family First was not even on the radar at that stage. I quit, and a day or so later Family First rang me and said would you like to have a chat.”

Day ended up contesting Mayo for Family First in 2008, and then a Federal Senate seat in 2010 – missing out on election only by the narrowest of margins.

“The organisational wing of Family First needed a bit of work, so I was very happy to do that, put together much more structure. We had (Victorian Federal Senator) Steve Fielding before, so put a bit of space between the Steve Fielding era and ourselves.

Since his recruitment, Day has driven a stiff broom through the party. He’s now its federal chairman and largest financial supporter, loaning the party more than $1 million since 2009, Federal political donation data reveals.

He’s also using his own funds to fund his campaign, although he won’t say how much he’s spent over the last few years.

He’s installed the party in the Bert Kelly Building (which he owns) and he’s presided over a wholesale restructuring of the party modelled in the shape of his highly successful home building company Homestead Homes – from where his wealth flows. 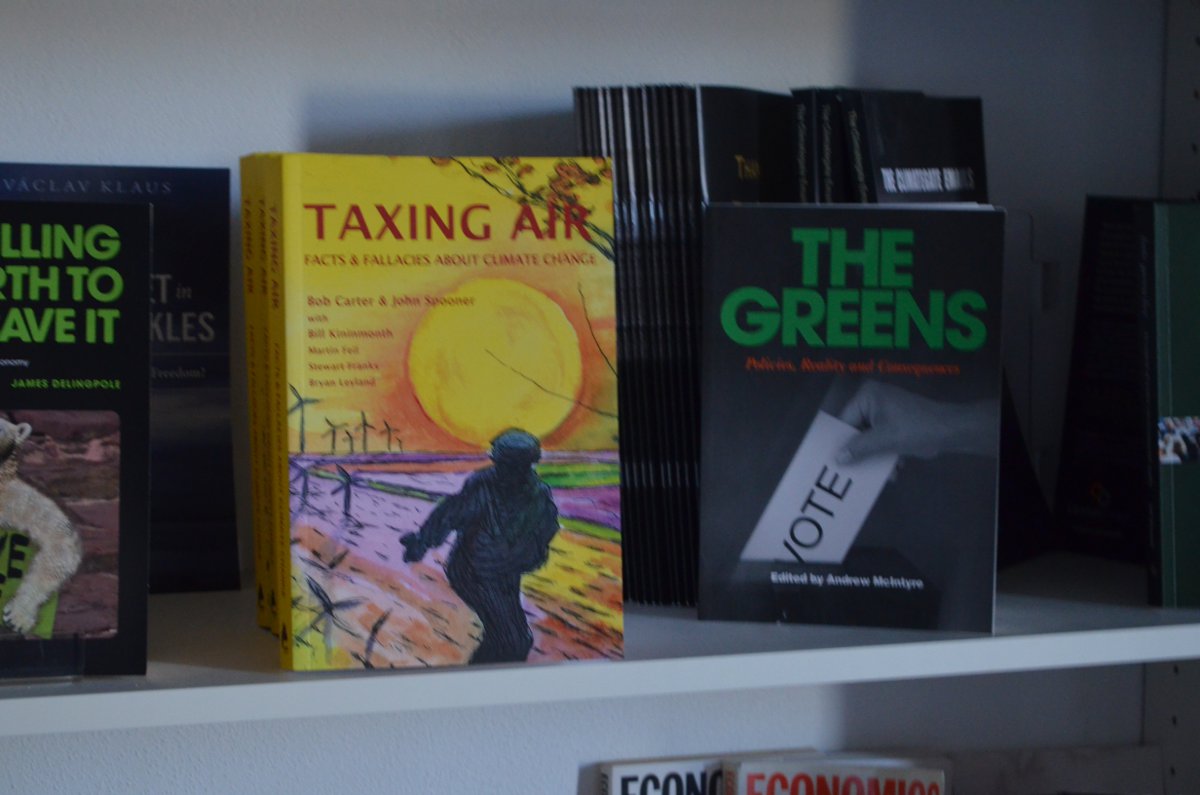 Day is a conservative’s conservative. He was critical of WorkChoices for not going far enough. He’s good friends with Tony Abbott – they met while working on the Australians for a Constitutional Monarchy campaign.

He’s now critical of the Liberal party for not being conservative enough.

“The classic example is in the State Parliament here. When the euthanasia debates come up, when the same sex marriage comes up, prostitution liberalisation, a lot of Liberals keep voting for all this stuff. So therefore we have to support the Labor MPs that support our values on this sort of stuff.”

“If you own your home, you’ve got a job, you’ve got your finances under control, you live in a safe neighbourhood, you don’t need the government. That’s the last thing the government would want, for you not to need them.

“It used to be like that. Full employment, great farming communities, low crime rates, home ownership. For 20 years Australia had full unemployment. From 1950 to 1970.

“Most people want to get a job, travel a bit, buy a house, get married, have a family… the way that their parents mostly did.”

Things used to be better, Day believes – Australia used to be better. The path to get things back to the way they used to be? Less government. Governments should “uphold laws of contract, obviously defence, and not interfere in people’s lives”.

“We’re not anarchists, but there’s an awful lot that government does get involved in that they don’t need to, and it all costs money.”

There is, he says, a how-to-vote card for every enrolled voter in South Australia in this room.

One of those contracts that government should be protecting is marriage.

“Marriage is a very important institution for the furtherance of the species and for the protection of children,” Day says.

“It’s unarguable that children thrive and do much much better when they are raised in a family with the natural mother, natural father, in a marriage situation which is protected under law. It’s protected by the government of the day in order to provide a safe and secure environment for children to grow up in.”

Of course, because Day is wedded to more than one political interest, his policies may stretch further than just those of Family First.

InDaily asked him what he would do if he held the balance of power in the Senate – again, a real possibility.

“I’m the secretary of the Samuel Griffiths society, which is all about federalism … so the states are all competing with each other, rather than one central government that just dictates.

“Number two, I’m elected on a Family First platform to pursue the interests of families, and so on. Simple.” 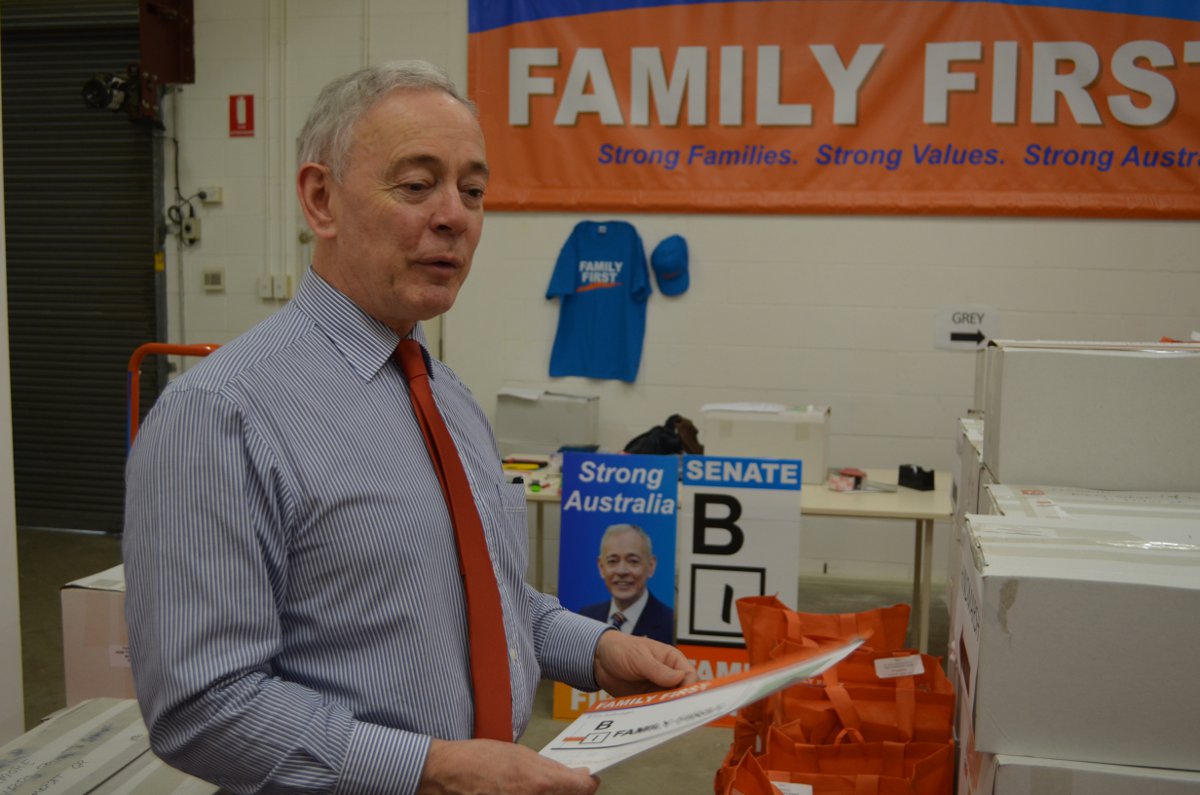 For his latest run at the Senate, he’s collected 19 preference deals from other parties.

He’s also built what looks like a sophisticated campaign machine.

Day takes InDaily out to the back of the building, into a large storage room filled halfway to the ceiling with white boxes and orange grocery bags.

Each orange bag is filled with Family First how-to-vote cards, and tagged with a little sticker.

“That’s the electorate of Adelaide, Malvern Uniting Church, and in brackets is the number of voters that voted at that booth last time.”

There is, he says, a how-to-vote card for every enrolled voter in South Australia in this room.