Adelaide’s wealthy turn their noses up at the city’s buses, leaving public transport to the poor, in defiance of a national trend.

And those drivers aren’t taking passengers along for the ride, with Adelaide having the highest proportion for any capital city of people driving to work solo.

In Sydney and Melbourne the wealthy tend to be heavy users of public transport, compared to the less-well-off. Not so in Adelaide, according to the latest Federal Government State of Australian Cities report.

“This is the reverse of Sydney, Melbourne, Brisbane and Perth, where a higher proportion of people in the top income groups use mass transit for journeys to work than those in the lowest group.”

Nationally close to 20 per cent of people in the highest income bracket use public transport to get to work – the figure is as high as 30 per cent in Sydney.

Adelaide is the only mainland capital city where the average annual income of public transport users is lower than that of car drivers.

Despite Adelaide having a substantially lower public transport utilisation rate than other cities, the proportion of lowest-income group users is only slightly below the national average, reflecting “a comparatively high rate of mass transit use” among the less-well-off.

The report makes interesting reading when compared to ABS figures compiled by the RAA, which show almost 40 per cent of people who work in the CBD use public transport to get to their job, compared to less than 4 per cent of workers in suburban centres. 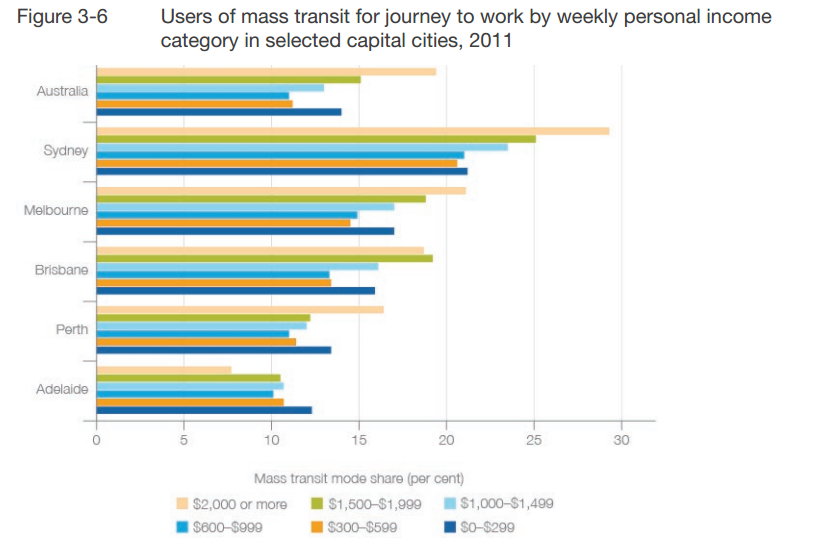 The report says the “vast majority” of people driving to work come don’t have a passenger with them.

“Analysis of census data shows that for travel to work in Adelaide in 2011, the vast majority of trips in light passenger vehicles were driver-only. These trips made up 64% of all journeys to work.”

Average congestion time during peak hour is 28 minutes, and the worst time to drive is in the morning peak hour, the report finds.

Overall the report finds that Australians are more reliant on cars versus public transport when compared to major international cities.

Do you catch a bus, or drive solo to work? Tell us why – email indaily@solsticemedia.com.au