Mark Valenzuela is known in Australia for his maximalist, detailed and immersive multi-media installations.

Opening this week at the Adelaide Central Gallery at Adelaide Central School of Art, Still Tied to a Tree builds on the busy, overwhelming aesthetic he’s created for other major exhibitions – including his 2020 Adelaide Biennial work Once bitten, twice shy.

Featuring steel structures, dozens of detailed ceramics, paintings, drawings, and scenes made from eclectic materials like picket fencing, the new body of work fills the gallery, built out vertically and horizontally. But, Valenzuela says, if he’d created it in the Philippines – where he lived until 2012 – the work would present very differently.

“When I’m in the Philippines, there is this sort of chaos… in the morning, there’s the roosters crowing, the dogs barking, houses are really close to each other,” he says. “When I’m there, I create really pristine work – you go and it’s one word, or a few paintings, and then you just contemplate.

“In Australia… you’ve got so much space. So, I’m trying to sort of do the opposite.”

Still Tied to a Tree is an embodiment of Valenzuela’s attempt to reconcile his two homes. Throughout the exhibition, he tracks the parallels and contrasts between Australia and the Philippines, creating a strange hybrid space that reflects on both places while being neither of them. 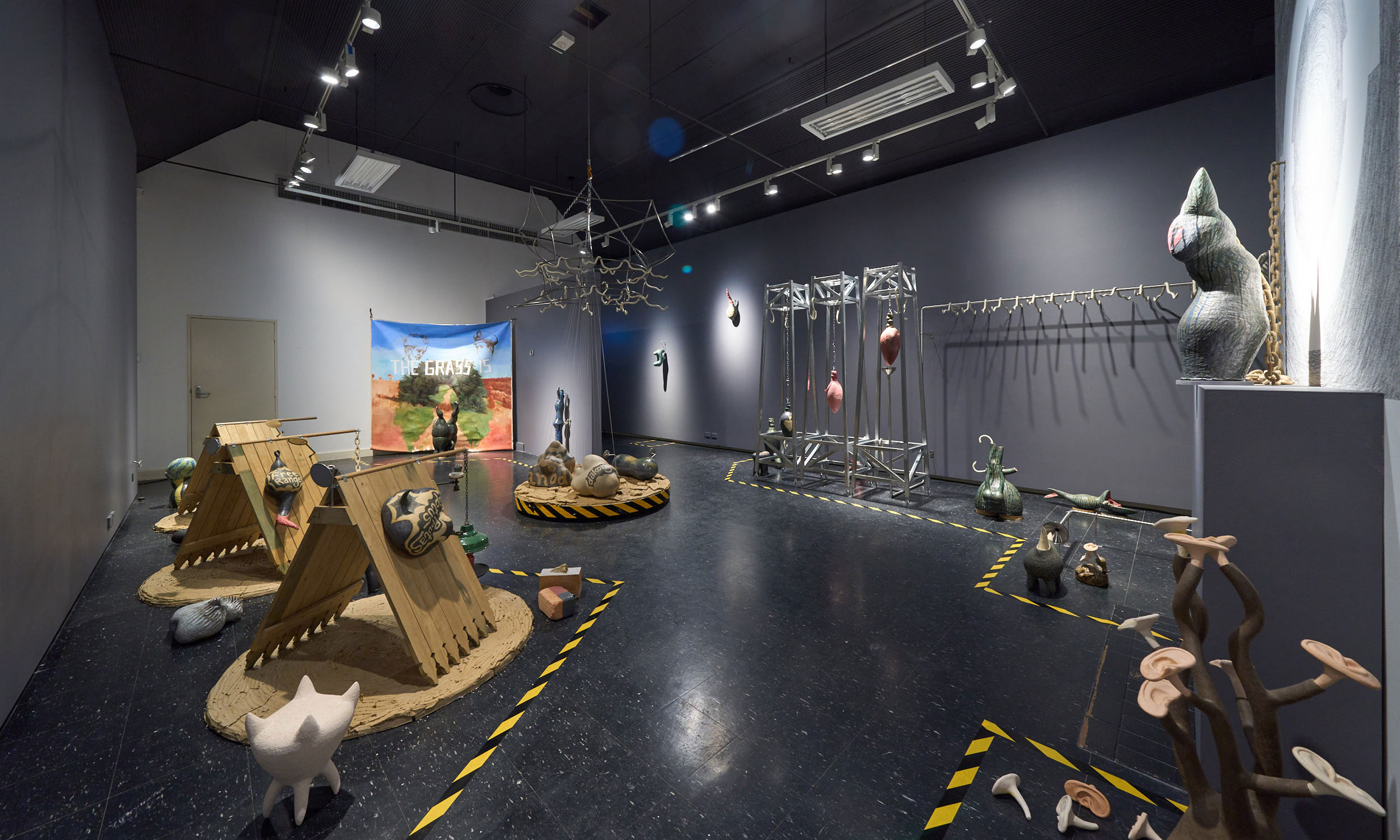 “[In the Philippines] we’ve been colonised for more than 350 years,” says Valenzuela.

“We’re a country which is subject to colonisation all the time, or invasion, because of the geographical situation – that’s where the trade route is. Then we’ve got that colonisation here [in Australia] as well, but it’s very different in some ways.

With a playful visual language that Valenzuela says is influenced by his materials, particularly the contrasting fragility and flexibility of clay, the artist re-contextualises iconography from both cultures.

A ceramic leaf blower rests next to a scattered carpet of ears, conjuring a suburban morning in Adelaide. In another scene, strange hybrid animals – referencing the cock-fighting tradition inherited from Spanish colonisers in the Philippines – are tethered to shelters made from fence pickets that hint at the increasingly irrelevant Australian Dream. 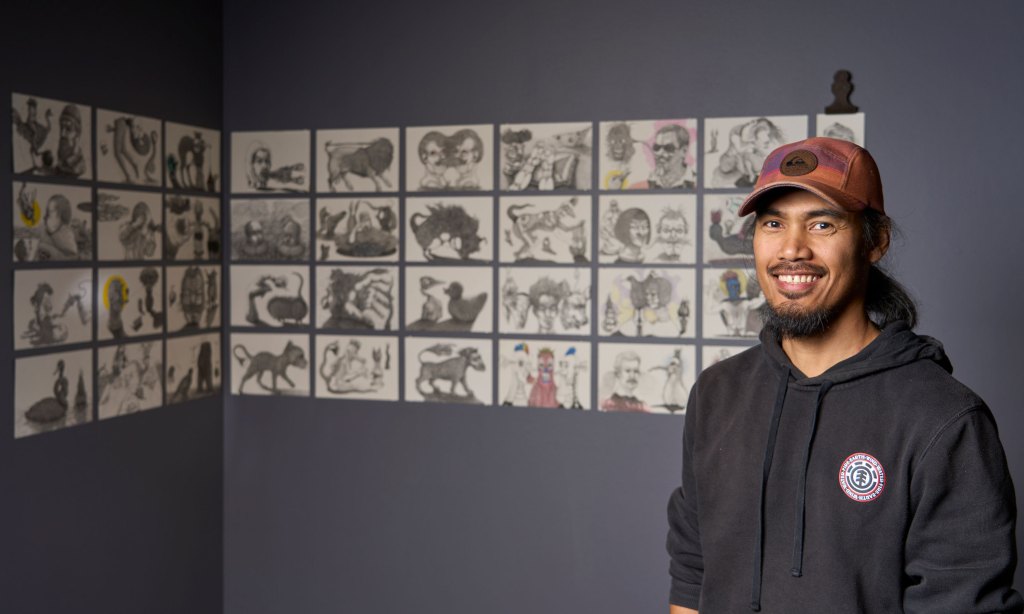 Mark Valenzuela with a series of detailed drawings that are part of his 2022 SALA exhibition. Photo: Sam Roberts

While there is a clear personal narrative Valenzuela is pursuing when exploring both places, the questions conjured by the work are also broader. With this surreal hybrid world, he’s asking for acknowledgment of the layers of identity and tradition that make up a culture.

“The identity and the individuality of the person coming in shouldn’t get eroded. It’s okay to just co-exist – that lets spaces form where two cultures form one, but of course it’s not even two cultures, it’s hundreds of cultures coming into one.”

This is among the enduring themes of Valenzuela’s practice, which – alongside other recurring ideas like reconfiguration, territoriality, conflict, resistance, and resilience – are explored by writers Anna O’Loughlin and Belinda Howden in a monograph published to accompany the exhibition.

As SALA feature artist, Valenzuela’s work will also be exhibited at the Art Gallery of South Australia from August 1. There, pieces from AGSA’s collection will be re-exhibited (and augmented by some of Valenzuela’s tweaks and additions) after they first appeared at the 2020 Adelaide Biennial of Australian Art: Monster Theatres. 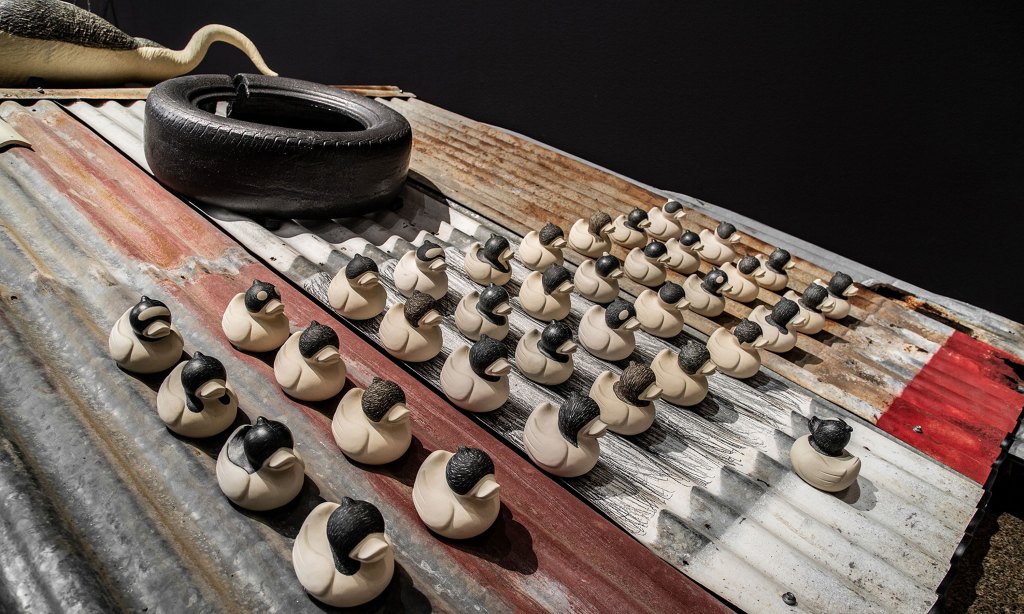 Mark Valenzuela’s Once bitten, twice shy in the 2020 Adelaide Biennial of Australian Art: Monster Theatres at the Art Gallery of SA – it is the basis for AGSA’s SALA display, which will also include some new works. Photo: Saul Steed

For Valenzuela, the exhibition of his artworks – whether they’ve been recently created like many of those in Still Tied to a Tree or brought back into the light after being stored – gives them new life.

“When you finish your work, it becomes dead,” he says. “So, by the time you make the work, it’s a dead work.

“It will only become alive again when somebody engages with it – so there’s a discourse between the viewer and the work.”

In a strange way, Valenzuela feels like this part of the conversation has little to do with him.

While his hands and mind have shaped them all, the ideas and objects in Still Tied to a Tree and in the vestibule at AGSA are no longer Valenzuela’s. Now, he says, the art belongs to the audience.

Still Tied to a Tree is showing at the Adelaide Central Gallery (at Adelaide Central School of Art in the Glenside Cultural Precinct) until September 16. Mark Valenzuela’s work will be on display in the Art Gallery of South Australia vestibule from August 1-31.