Among our beliefs being further morphed by social media algorithms, our work facilitated by Zoom meetings, and the ever-present surveillance of silent data collection, Metaverse, at ACE Open, seeks to physicalise the contemporary internet into a tangible work.

Curator Patrice Sharkey says Facebook’s stated intention in 2021 to develop fully-realised virtual-reality spaces where users can socialise, walk around a virtual world, and – most importantly – make purchases of “digital goods”, was a key motivation for the exhibition.

This “increasingly inescapable relationship to technology” is expressed through installations from four artists: Roy Ananda, Britt d’Argaville, Harun Farocki and Giselle Stanborough. It offers an eclectic and impactful dystopian vision of our virtual lives as they become merged with the real.

On entering the gallery’s foyer, visitors encounter d’Argaville’s striking work the chords are kissing. Featuring hundreds of data, telephone, and outdated computer cables that would otherwise be consigned to the bottom drawer of a desk, it depicts an almost organic creation that appears to have grown between two pillars in the space. The roots are adorned with fluff resembling animal fur, and the use of PVA glue produces a feeling that we are looking at the innards of some cross-cybernetic/organic monstrosity.

D’Argaville has been influenced by Akira, the legendary 1980s anime film, and this highly visceral depiction of the increasing role the digital sphere plays in our lives is reminiscent of horror sci-fi. However, the title also brings a more ambivalent and possibly voyeuristic feeling in viewing the work, as we witness and imagine these curling wires entwined in an endless embrace. 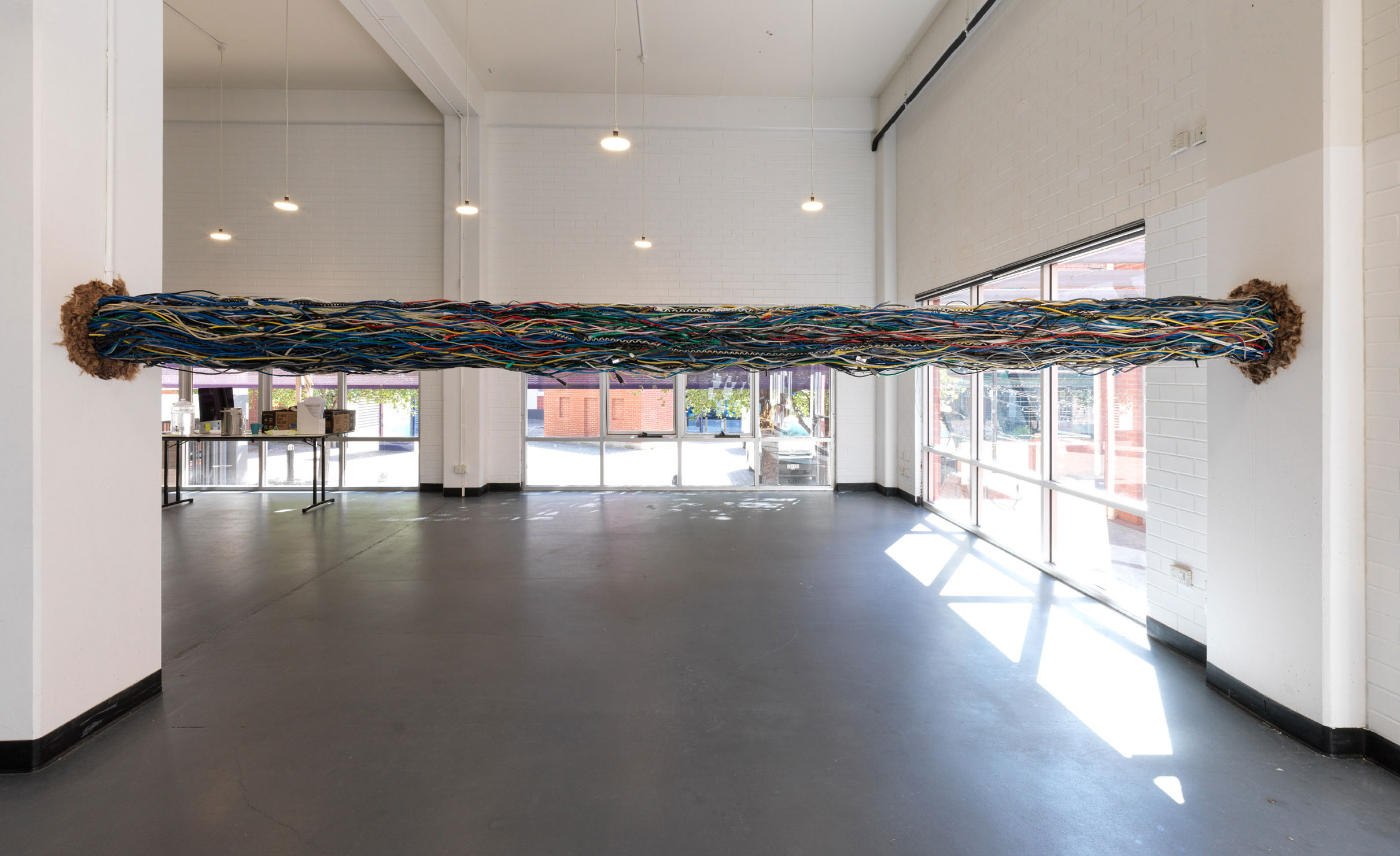 Cyberpunk and various 1980s science fiction is indeed an inspiration for much of the exhibition. The genre depicts a far less utopian vision of the progression of technology compared to other sci-fi of the era. Emerging at a time of rapid technological development, a re-urbanisation in much of the world, and a widespread cultural moment of optimism in regard to technology’s potential, cyberpunk largely entered the western mainstream in the 1980s with works such as Ridley Scott’s Blade Runner. It is typified by vast neon skylines, cybernetically augmented characters, and futuristic depictions of poverty, crime and corruption, ultimately critiquing contemporary society’s injustices.

Roy Ananda, in his work Electronic void illusion, is heavily influenced by this contrast key to cyberpunk between optimistic outlooks in the 1980s and ’90s regarding the ability of technology to improve people’s lives, and the harsh oppressive near-futures depicted in fiction of the same era.

Electronic void illusion features a hallway lined on one side with long printouts of quiz results from the 1000 online personality tests Ananda took to create the work. Some of the quizzes revolve around fictional characters (such as Which Hogwarts house do you belong to?), while others have an edge of pseudo-scientific cultural acceptance, such as the infamous Myers-Briggs test.

A fascinating series of screenshots from these tests is arranged on the opposite wall, imitating computer tessellation and evoking earlier attempts to simulate 3D environments in computing. These images are linked by strings back and forth, suggesting a conspiracy theorist’s basement. Ananda’s sense of humour and idiosyncrasy is refreshing among the bleaker works of the exhibition, as he attempts to define himself through clumsy and superficial internet quizzes. 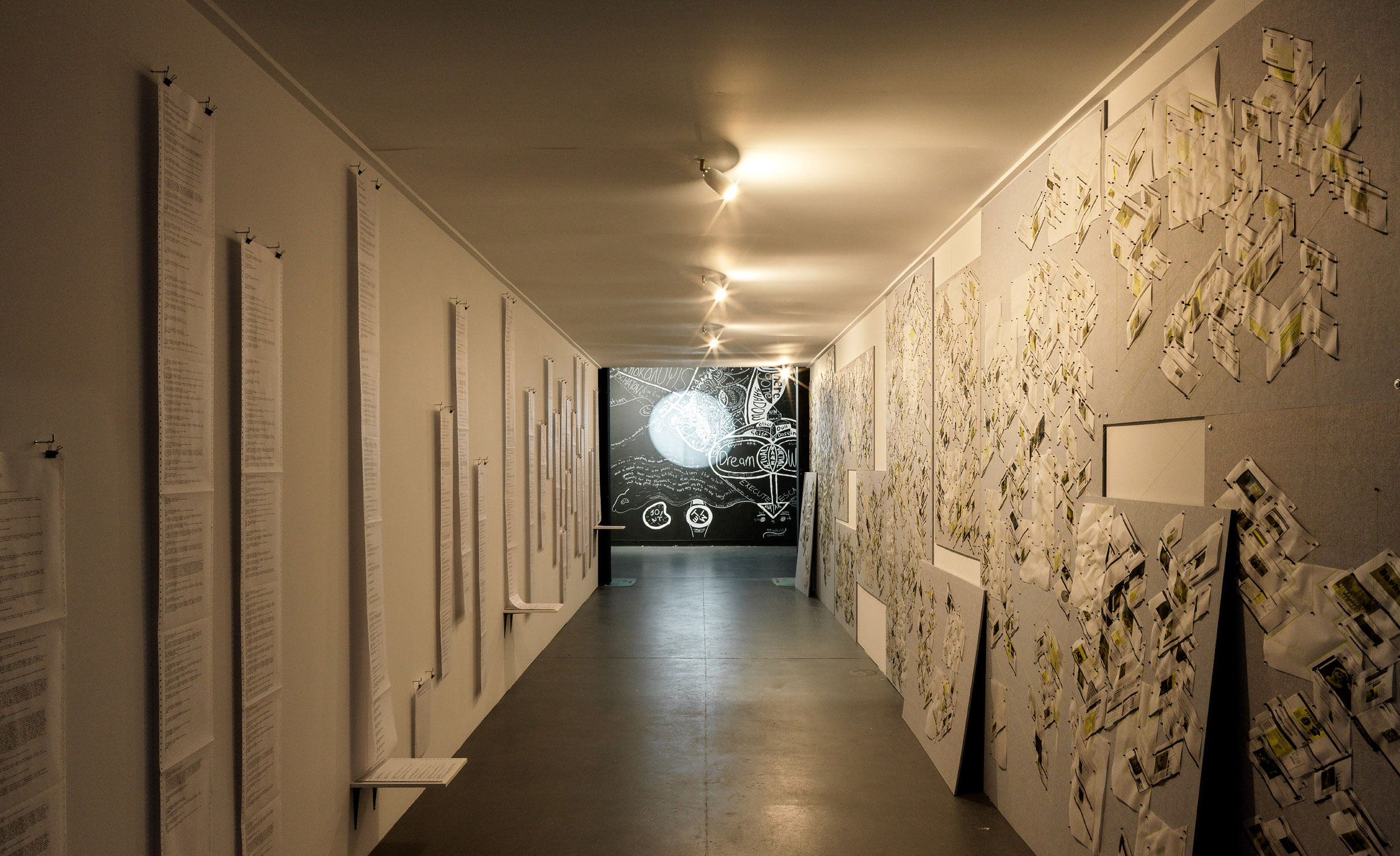 Perhaps the most theatrical work in Metaverse is the latest iteration of Giselle Stanborough’s Cinopticon, which originally showed at Sydney’s Carriageworks in 2020 amid the earlier stages of the global pandemic. Labyrinthitis is an immense series of wall-painted diagrams that continuously shifts as a small spotlight pans across the entire space.

Stanborough draws heavily on Lacanian psychoanalysis and Foucault’s explorations of power; phrases seem to free associate as they wrap around the walls, shifting from racist tropes, to anti-feminism, to discussions about video games, and the searchlight is highly evocative of Foucault’s Panopticon, which depicts a circular prison with a watchtower at the centre. 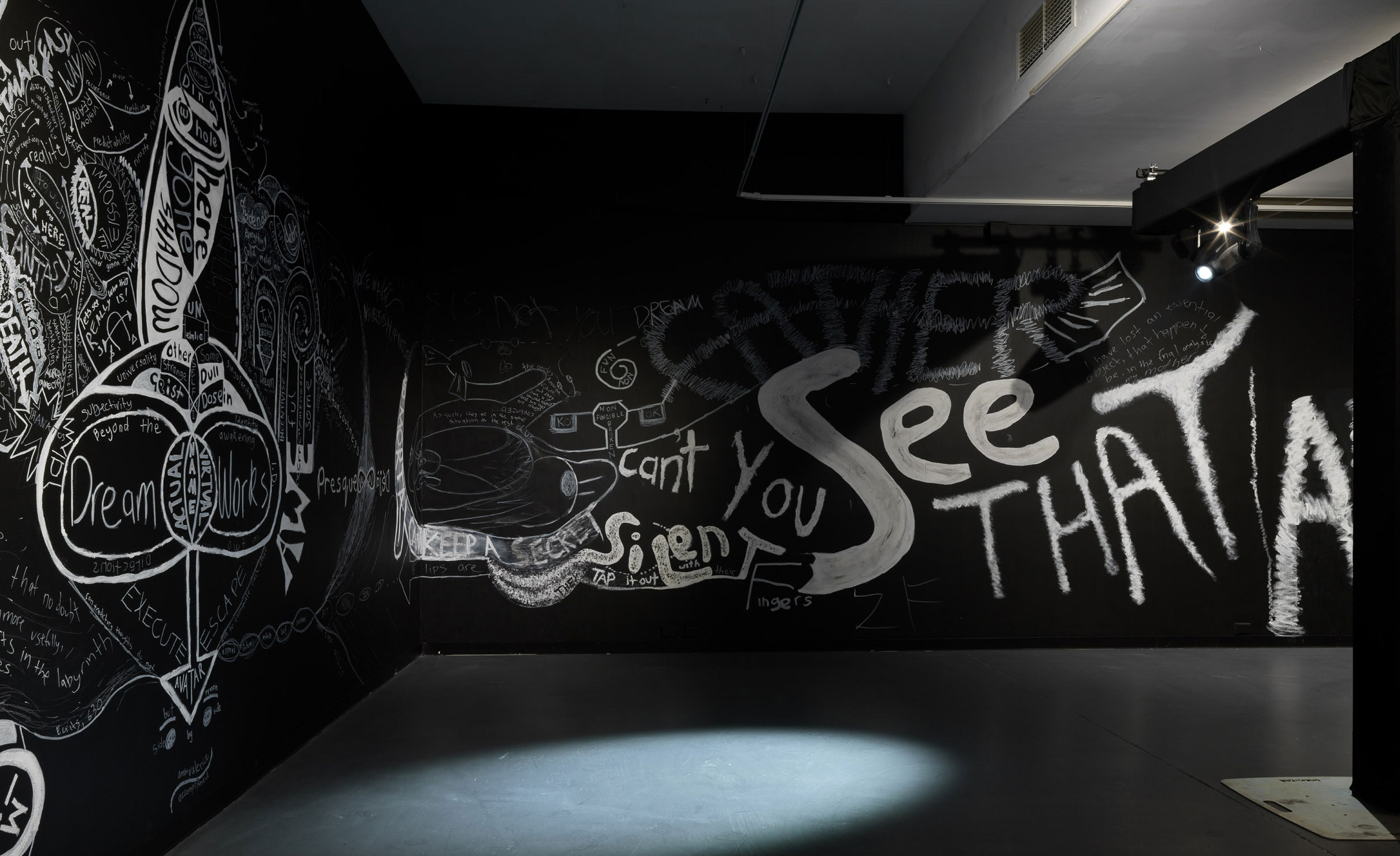 The final work in Metaverse is fascinating to anyone who has grown up with the evolving artform of video games. Parallel, from the late documentary filmmaker Harun Farocki, features a series of demonstrations of the increasing complexity and photorealism of computer graphics since the early years of video games in the 1970s and 1980s to today.

The video installation is framed around the digital representations of three natural phenomena – waves, wind and trees – and the simulation of human behaviour by non-player characters. We see the technology progress from two-dimensional NPCs (non-player characters) that walk a set path repeatedly, to fully realised simulated environments with dynamic events, pathways, and reactions from NPCs, depending on what the player is doing.

Metaverse is a thought-provoking and cutting exhibition of new and reinstalled work from local, national and international artists that seeks to ultimately interrogate human relationships with the ever-expanding horizons of digital technology.

It is an experience in itself weaving between the works and being guided through the central corridor in the exhibition space, and thus we – like bits of data traversing fibre-optic cables – are shifted, funnelled and shaped by Metaverse.

Metaverse is at ACE Open in the Lion Arts Centre until May 14.