If everyday life feels beige, there could hardly be a better tonic than polka dots and pumpkins. Not just any polka dots or pumpkins, but specifically those found in Yayoi Kusama’s vivid, evocatively titled installation THE SPIRITS OF THE PUMPKINS DESCENDED INTO THE HEAVENS.

Stepping into the Japanese artist’s 7m x 7m infinity mirror room in the Art Gallery of South Australia’s Melrose Wing, it takes a moment to overcome the initial feeling of disorientation. Every surface ­– the bright yellow walls, floor and ceiling – is covered with black dots. More startling still is the fact that the mirrored box at the centre of the space, which reflects yet more dots, means you’re also confronted with your own image as you gaze around.

AGSA director Rhana Devenport describes it as “an experiential and otherworldly encounter”. In some ways it’s like the art world equivalent of standing in the middle of a forest of endless trees: you feel both lost and found, abandoned in this surreal space of infinity and yet also enveloped in its embrace.

It’s all delightfully discombobulating… and that’s before you even climb the three stairs on the far side of the mirrored box to lean in and look through the “peep space”, taking in the myriad spotted pumpkins that appear to be multiplying before your eyes. 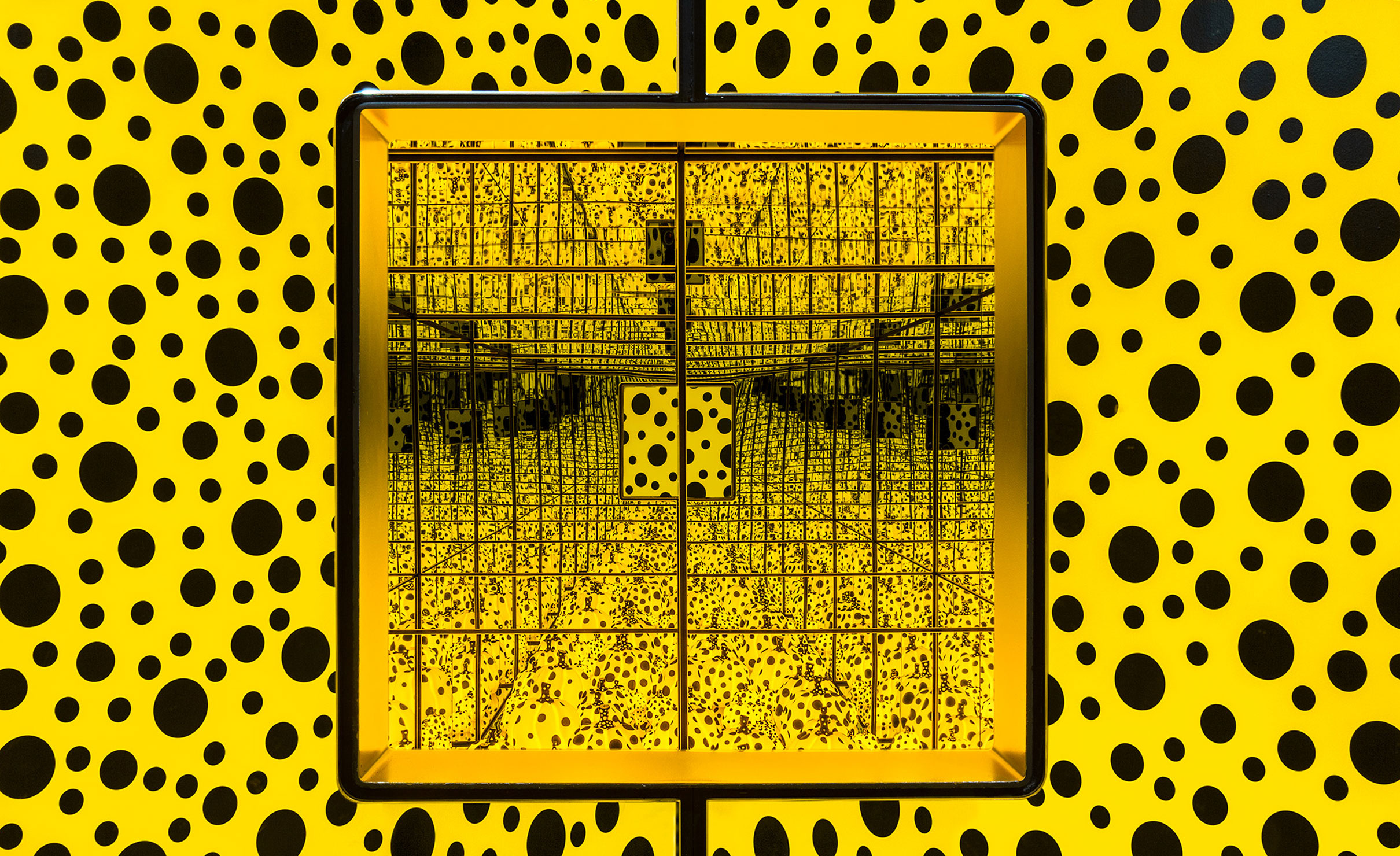 Through the peep space: Yayoi Kusama, THE SPIRITS OF THE PUMPKINS DESCENDED INTO THE HEAVENS, 2017. © Yayoi Kusama, courtesy of Ota Fine Arts

THE SPIRITS OF THE PUMPKINS DESCENDED INTO THE HEAVENS ­– a National Gallery of Australia touring exhibition that opens at AGSA today and will remain there for 12 months ­– may seem tailor-made for the selfie generation. However, 93-year-old Kusama was devising her infinity mirror rooms decades before smartphones ruled our world.

“This is her first mirror room, Phalli’s Field – that’s from 1965, and it was made when she was in New York,” says NGA senior curator of Asian art Carol Cains, pointing to a large photograph hanging outside the AGSA infinity room which shows a young Kusama inside Phalli’s Field.

The artist moved to America in 1958 and first began exploring ideas of infinite repetition and space through her Infinity Net paintings. Cains – in Adelaide for the opening of THE SPIRITS OF THE PUMPKINS – says that during Kusama’s time in New York, where she lived until 1973, she was working within “incredibly male-dominated” spheres, first in abstract expressionism and then pop art.

“She was doing work that was ahead of the time in many instances and other artists, she’s claimed, have copied her. Her peers were people like Andy Warhol, who worked a lot with duplication and repetition, which she’d been doing earlier, [and] Claes Oldenburg, who worked with soft sculpture, which she’d done in a show before his.”

Kusama started painting from a very young age. She has had visual and auditory hallucinations since she was 10 years old, and instinctively began transforming those experiences into her art. Pumpkins are one of the most recognisable recurring motifs throughout her career, relating to the fact that her father was a seed merchant.

Devenport, who visited Kusama at her Tokyo studio in 2000, says she is often claimed to be one of the most popular artists in the world based on the millions of people who have attended her exhibitions.

Two of her other infinity rooms – Infinity Mirrored Room – Filled with the Brilliance of Life and Chandelier of Grief – are currently installed at the Tate Modern in London, where general release tickets have sold out right through until the end of September. 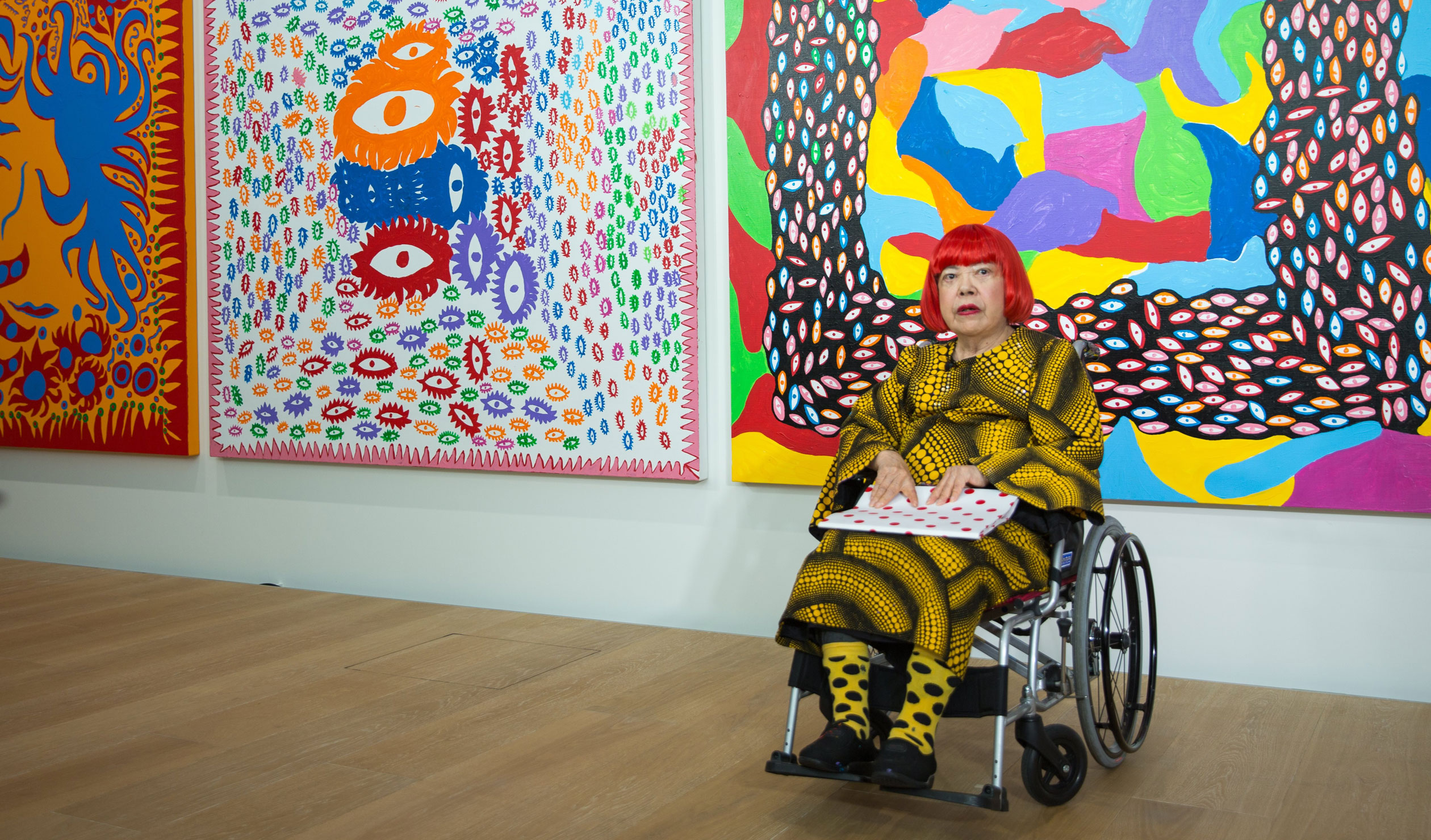 Yayoi Kusama in front of some of her recent works at a media preview of the Yayoi Kusama Museum ahead of its opening in Tokyo in 2017. Photo: Christopher Jue / EPA

“She is an artist whose works really connect very powerfully and strongly to our public in so many different countries,” Devenport says, adding that Kusama is “acutely sensitive to the world and resolutely brave”.

“She is also breathtakingly prolific… her work spans seven decades in a dizzying array of media including 13 novels and books of poems, and literally hundreds of exhibitions. She’s also worked in film, in performance, fashion and installation, and she even had her own boutique in New York when she lived there.”

Highlighting Kusama’s determination and eccentricity, Devenport recounts a story of how she appeared uninvited at the 1966 Venice Biennale with a project called Narcissus Garden. Dressed in a gold kimono, Kusama presented 1500 shimmering stainless-steel orbs on the lawn outside the Italian Pavilion and sold them to passersby.

“And what I love is that in 1993, so many years later, she was invited back as the first solo artist to be presented at the Japan pavilion at the Venice Biennale – a wonderful triumph of her determination and her vision.”

Although Kusama has been in care in Tokyo since 1997, she has a studio nearby and still makes art. Devenport says that during her visit in 2000, the artist was playful, energetic and immersed in her own work. 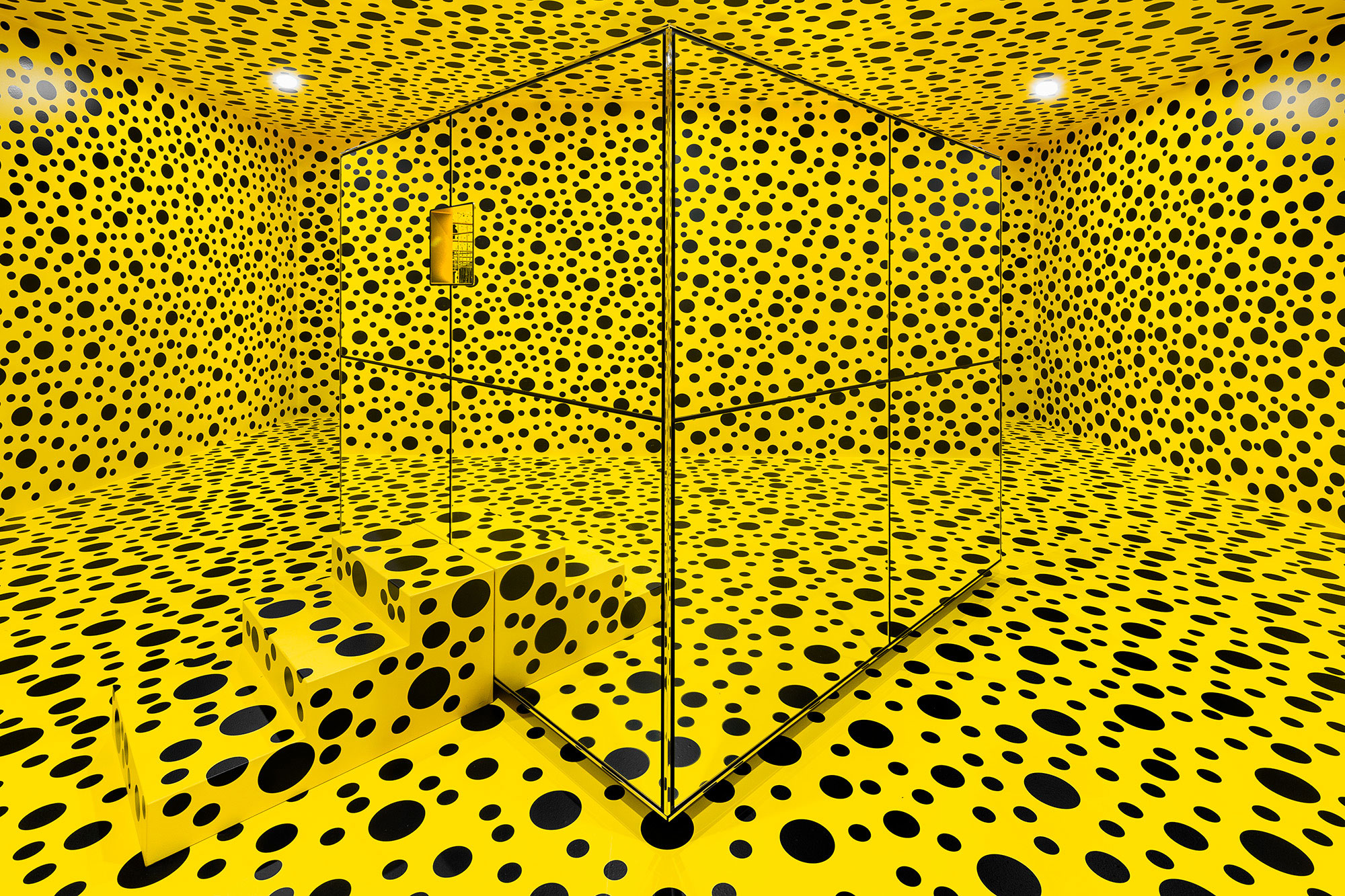 Installation view, Yayoi Kusama, THE SPIRITS OF THE PUMPKINS DESCENDED INTO THE HEAVENS, 2017. © Yayoi Kusama, courtesy of Ota Fine Arts

Cains believes one of the reasons Kusama’s infinity mirror rooms resonate so strongly with a range of visitors is that they have a performative element that reflects popular culture experiences such as the circus, vaudeville or theatre.

“But I think, more importantly, they just connect so well with that sort of microcosmic experience of thinking of the world as tiny, tiny particles and then immersing yourself in that, and as you immerse yourself they just expand into these infinite worlds… and of course the form of the polka dot and the pumpkin is so recognisable and accessible and appealing that people can just enjoy it.”

The installation process for THE SPIRITS OF THE PUMPKINS DESCENDED INTO THE HEAVENS is complex and lengthy, with Cains saying there is an established sequence for constructing the mirrored space and arranging the pumpkins within it.

“The other thing that we [the NGA and AGSA] both had to have is an extendable instrument so that we could reach into the peep show room and retract people’s spectacles and iPhones which they invariably drop,” she says with a laugh. “It’s sort of part of the viewing process.”

THE SPIRITS OF THE PUMPKINS DESCENDED INTO THE HEAVENS is on display in AGSA’s Melrose Wing until April 30, 2023. Entry is free and bookings are not required but capacity is limited.