I meet Clem Newchurch down by the reeds in a southern part of Kaurna Country, and before long he’s picked up a few strands and started weaving. As we walk and talk, he digs his thumbnail into the fibres and threads them over and under into an intricate braid.

Newchurch has been coming to this spot since he was a boy, chasing lizards back when it was a horse paddock. These days it’s a man-made wetland that borders the urban sprawl and shopping centre of central Aldinga, and some 340 hectares of protected remnant scrub beyond.

It’s not a studio per se, but Newchurch explains that he prefers making his art while “out and about”.

“My grandfather’s got a shack out at Point Pearce – some of the tools I’ve made were made sitting out front of the shack, looking out at the ocean. You can kind of do it anywhere, but this place is pretty special to me because I kind of grew up in the area.” 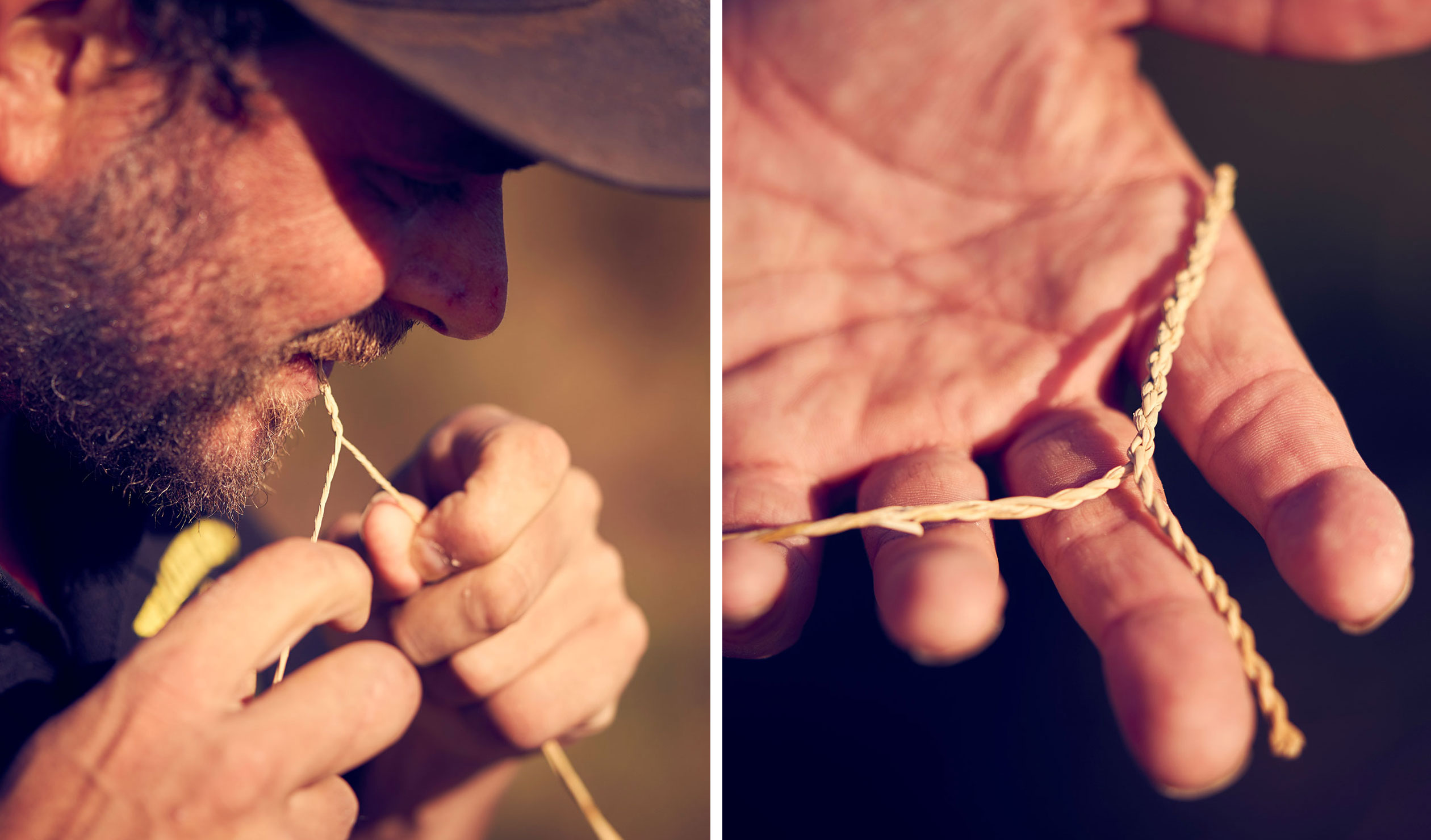 These wetlands were established by the council a decade ago, and it’s the reeds that have drawn Newchurch back in recent years after a lesson from Ngarrindjeri weaver Elder Aunty Ellen Trevorrow 12 years ago set him on a mission to revive Kaurna weaving and string-making techniques.

“I came back here and I’d learnt that Kaurna people did a similar weave,” he says. “I used to live a couple of hundred metres up the road, and after I learnt that technique I’d walk here and collect the reeds for myself.”

Newchurch has Kaurna, Ngarrindjeri, Narungga and Kokatha ancestry, and as he continued to research and finesse his own weaving skills, the environment around him revealed a deeper understanding of how his Old People lived. 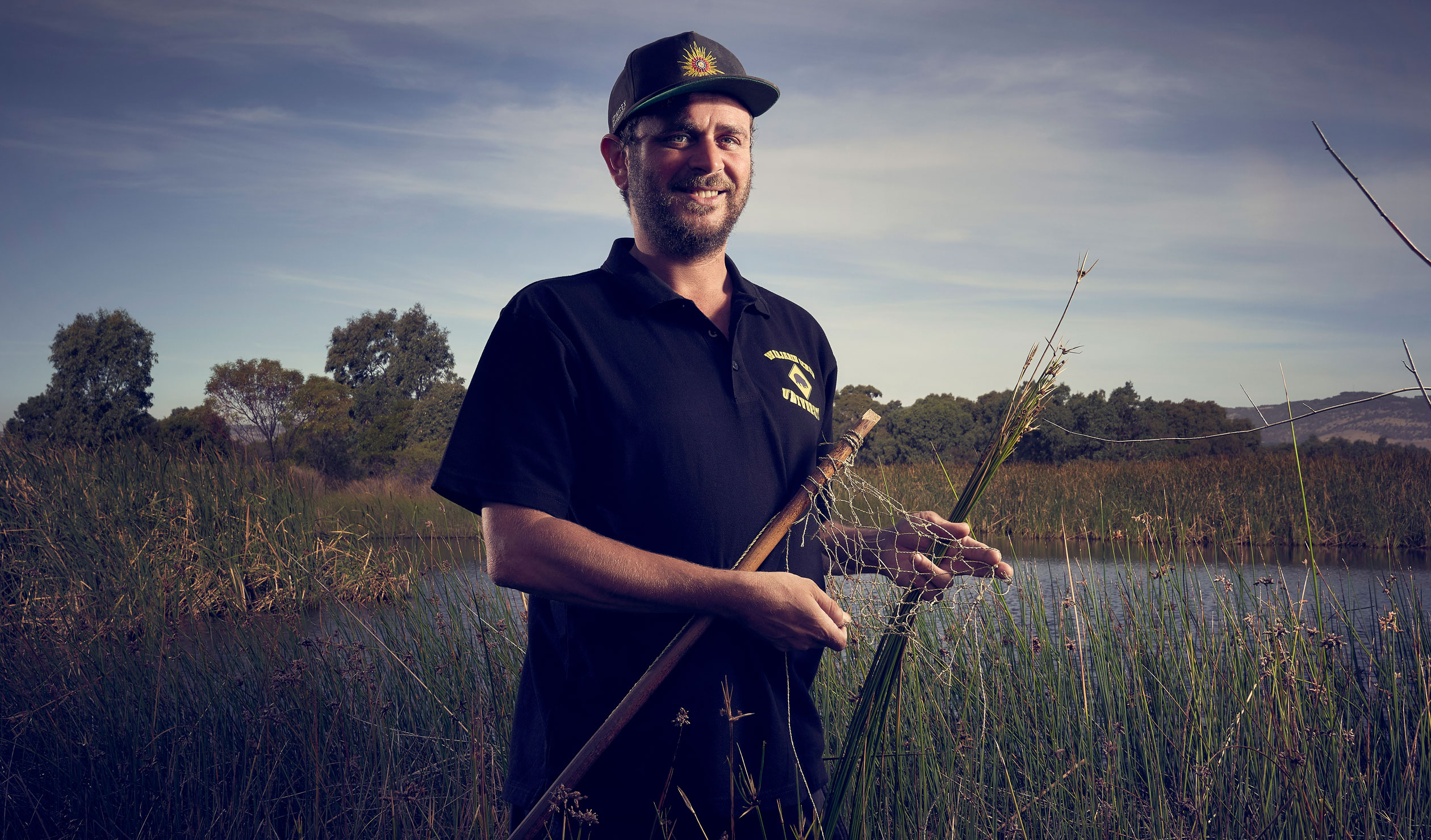 Clem Newchurch feels at home among the plants in the wetlands. Photo: Aubrey Jonsson

“I’d read about other plants that were used for string-making; this plant over here,” he says, pointing to one variety of reed, “there’s a bit of information out there, a couple of old paintings, where this was harvested massively in a lot of different areas, and definitely a food source. The bulbs can be eaten, you can make damper out of the seed-head, the fibre is also fairly strong and fairly long.”

After a while, Newchurch noticed the plants seemed to be working with him. too.

“One day I realised I could split the whole length of the flower stem and the centre into one whole length of fibre. I’d heard that you can chew it up, so I started chewing, started twisting, the more I did it the more the plant kind of showed me. It twists in on itself, almost automatically.” 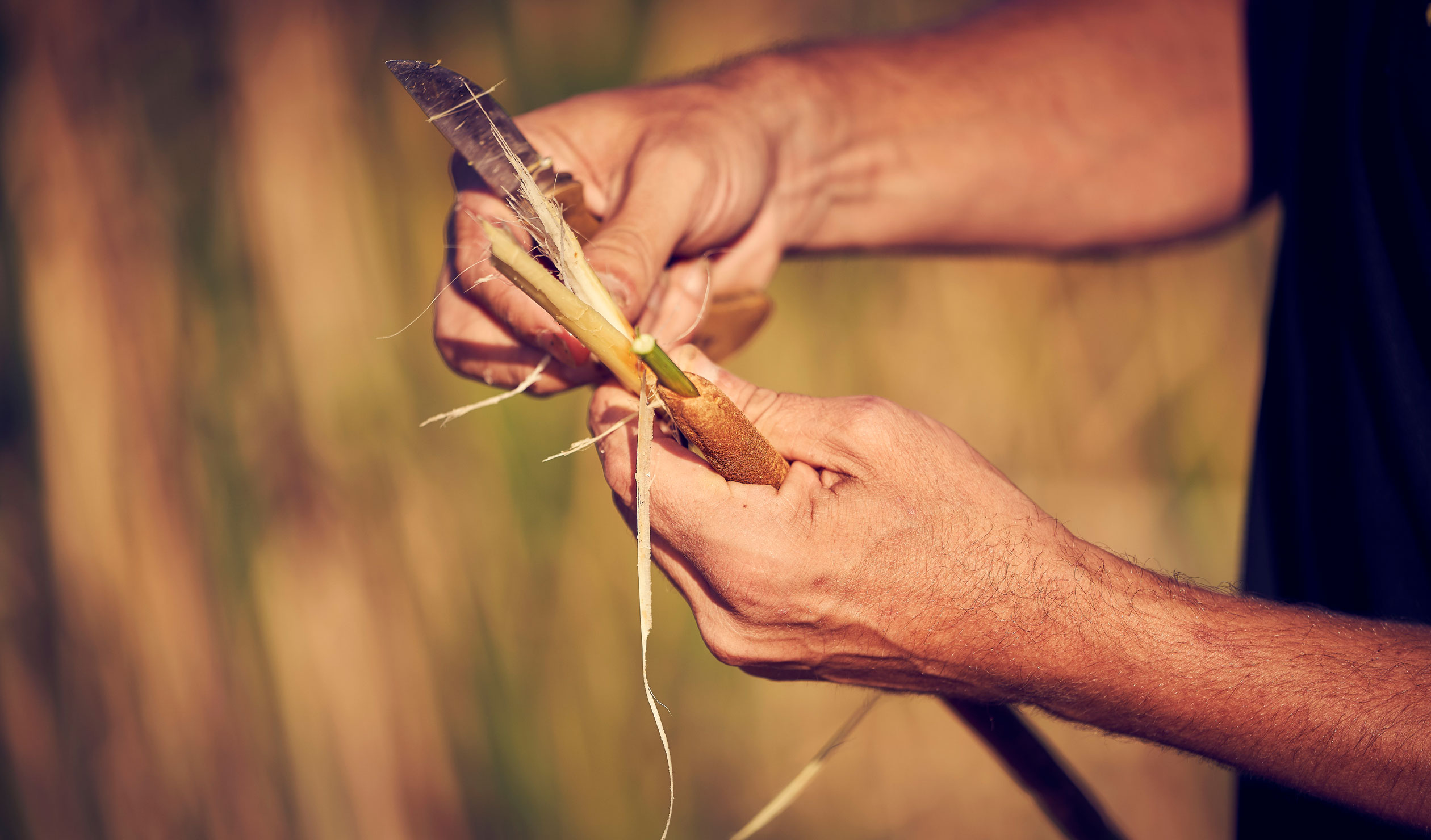 A range of different reeds are used in weaving and string-making. Photo: Aubrey Jonsson

He soon connected with Peter Turner, a Narungga, Kokatha and Ngadjuri man who had been on a similar journey over on the Yorke Peninsula.

“We recognised pretty early that we had those similar passions and a similar drive to try and learn about some of these old practices that weren’t happening any more,” Newchurch says. “We realised we’d kind of been doing the same thing, for around the same amount of time, on different Countries, using different plants – but the technique we were using to make the string was the same.”

The pair have recently collaborated on KAURNA: Still Here, a collection of woven and carved objects that serve as a counterpoint to the South Australian Museum’s exhibition of early colonial works by naturalist and painter George French Angas. Facilitated by Guildhouse’s Collections Project, Newchurch and Turner gained access to the museum’s collections to deepen their knowledge of old practices and their context.

“Before this project came up I didn’t actually know who George French Angas was. I’d seen a couple of his paintings; there are many of those old painters we reference,” Newchurch says. “But for us the artist name hasn’t been important – it’s the content that’s in the painting. In a way we’re claiming our own ownership of those images.”

Although steeped in the lens of colonialism, these painted snapshots feed into that bigger picture of oral testimony, research, and the lessons of Country that Turner and Newchurch were gathering. “More times than I can count, I’ve had just a feeling that these plants show you stuff. I like to think that it’s almost our ancestors talking to us through the plants – that inherited learning or that muscle memory, I guess, it’s instinctually within us.” 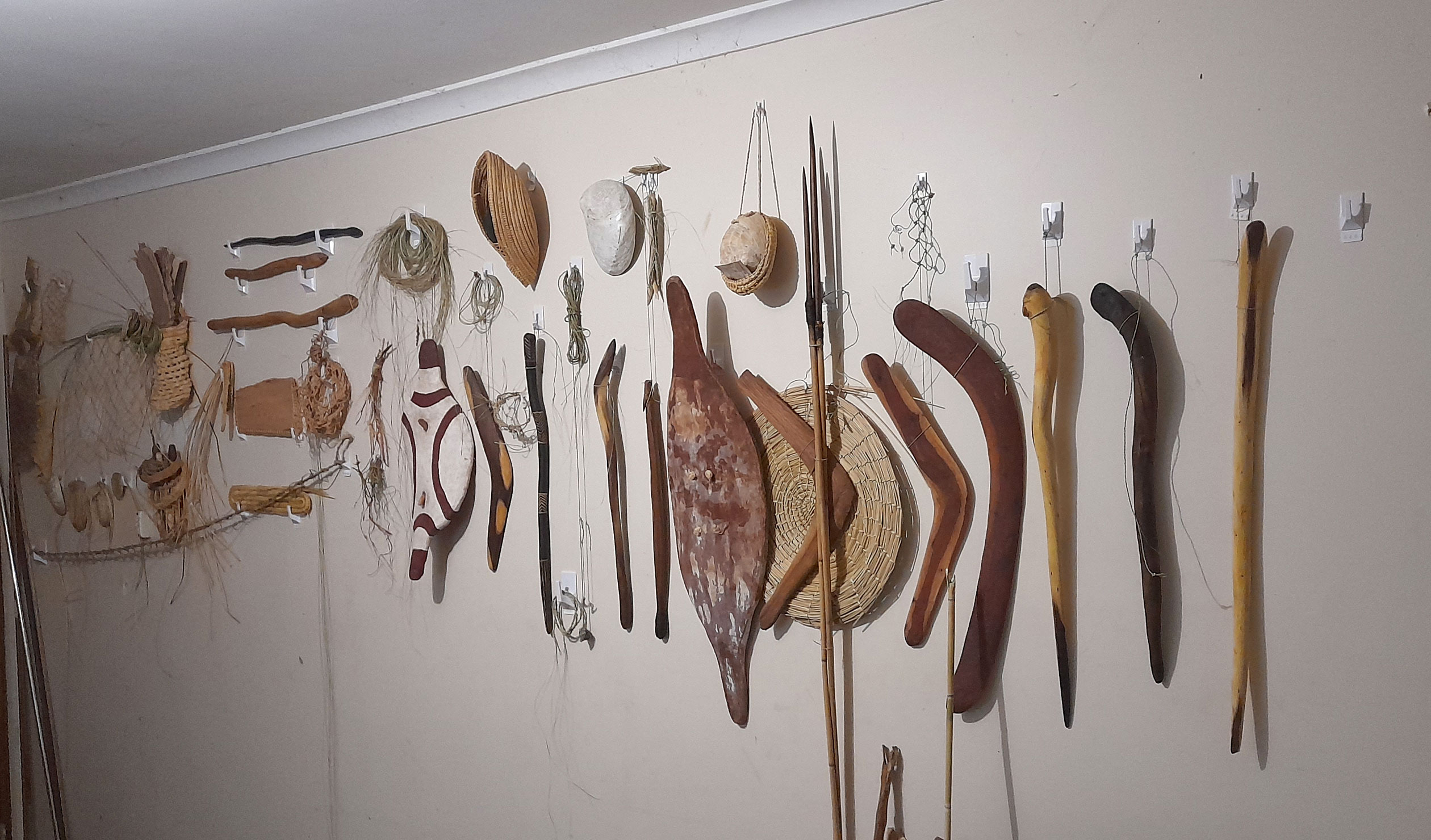 Works by Clem Newchurch hung on a wall of his home. Photo: Supplied

As we arrive back at the car park, he hands me the length of string he’s been quietly weaving throughout our conversation. We’ve been talking for a bit under an hour, but it’s clear there’s a whole lot of time, knowledge and purpose tied up in its fibres.

“One of the main things I really wanted to get across with this exhibition was that Kaurna people are still here – I don’t think people realise the history that’s at their doorstep,” Newchurch reflects.

“And my practice, what me and Uncle Peter have done in the museum, the message we want to show is that we’re still here, we’re still doing it, we’re still practising our culture – [it’s] in a contemporary setting, but it’s a continuation of the oldest living culture in the world. It’s important.” 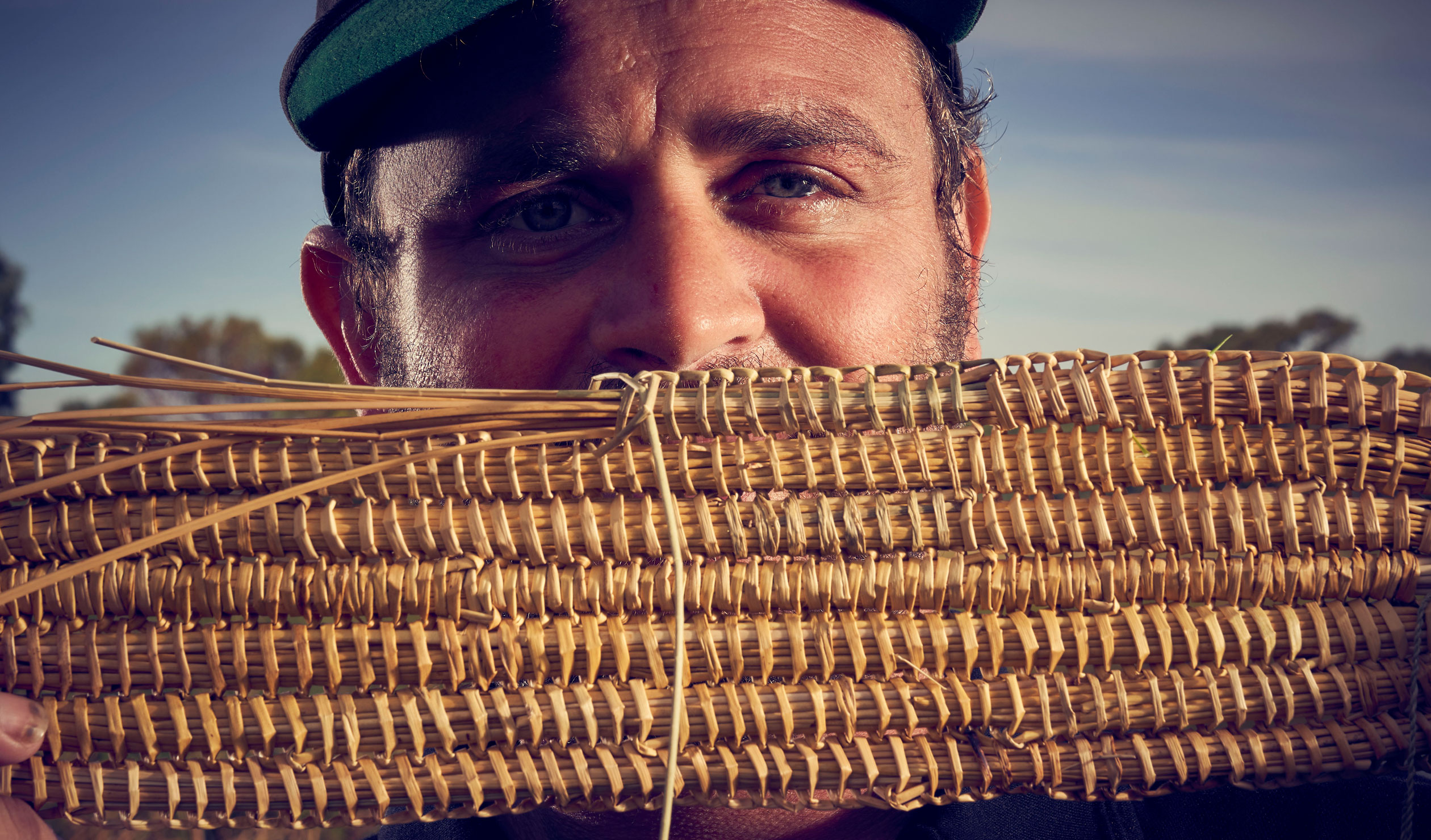 KAURNA: Still Here – a collection of carvings, painted and woven works by Clem Newchurch and Peter Turner – is currently showing at the SA Museum alongside Illustrating the Antipodes: George French Angas in Australia and New Zealand 1844-1845.