Isaac Julien, born in East London, is a British multi-disciplinary artist and filmmaker whose practice of more than 30 years honours his subjects with meticulous research and a multi-layered, poetic contextualisation that transcends boundaries of time and place.

The larger of Julien’s two works in Samstag’s ground-floor gallery is Ten Thousand Waves, a nine-screen audio-visual installation created in response to the tragic deaths in 2004 of 21 Chinese migrant labourers in north-eastern England. Illegally trafficked by criminals, they had been sent to pick cockles at low tide from the mud flats of Morecambe Bay on a cold February night.

Working for a pittance and unable to understand warnings from locals about the treacherous speed of the tides, they had remained too far from shore for too long and were trapped in the dark by the incoming, icy tide. One of the workers finally managed to communicate their perilous situation to emergency services, but by the time a rescue helicopter arrived, all but one been lost to the sea.

It was a widely reported incident that elicited nationwide sorrow at the time, as well as urgent questions about the exploitation of illegal migrant workers, but Julien’s layered and fragmented narrative, filmed mostly on location in China, adds a humanist depth and context through the poetic beauty of his cinematic exploration of this tragedy and global human migration.

Through years of research in China, Julien’s broader contextualisation of the drownings is informed by conversations with academics, curators and artists in both China and the UK and collaborations with eminent Chinese figures in arts. He commissioned the poet Wang Ping to create the words spoken by the ghostly protagonist of the film; the role of the white-robed goddess Mazu is is played by the renowned actor Maggie Cheung, and master calligrapher Gong Fagen inscribes the screen with characters in brush and black ink.

Most of the workers who lost their lives came from Fujian province, where the legend of the goddess Mazu is well known; it tells of the way she guided fishermen lost at sea to safety. In Julien’s film, Mazu drifts mid-air, Crouching Dragon-style, through the spectacular, mountainous scenery of Guanxi province, watching traditionally clad young men set out on their journey. Film footage shot on a Shanghai stage set of pre-revolutionary life in the city, along with modern footage from the city as it is now, is interwoven with the myth; the goddess makes an appearance in each, the artifice of the actor suspended against a green screen laid bare in transitions between film settings, stripping away any attempts at romanticism.

Set against ancient myth, metaphor and history, the Morecambe Bay incident is given the layered complexity that is lacking in news reports. The combined effect of archival footage from pre-revolutionary China and the early days of Mao’s revolution, along with footage shot from a rescue helicopter and cinematic scenes shot on set in Shanghai, provides a beautiful, compelling, 50-minute immersion in the nuanced depths that lie behind the tragedy.

On the upper floor, three screens present an altogether different world. Julien’s A Marvellous Entanglement presents the vision of modernist architect Lina Bo Bardi (1914-1992) through footage shot in and around her most iconic buildings in São Paolo and Salvador de Bahia in Brazil. Her visionary statements about the social, economic and cultural context for urban architecture are spoken by award-winning actors Fernanda Montenegro and her daughter Fernanda Torres, who represent the architect in her youth and later years.

In a letter, Bardi wrote: “Linear time is a western invention; time is not linear, it is a marvellous entanglement, where at any moment points can be chosen and solutions invented without beginning or end.” Her statement is repeated through A Marvellous Entanglement, accurately reflecting the time-transcending beauty of the film, which also touches on the painful, dark horrors of slavery. 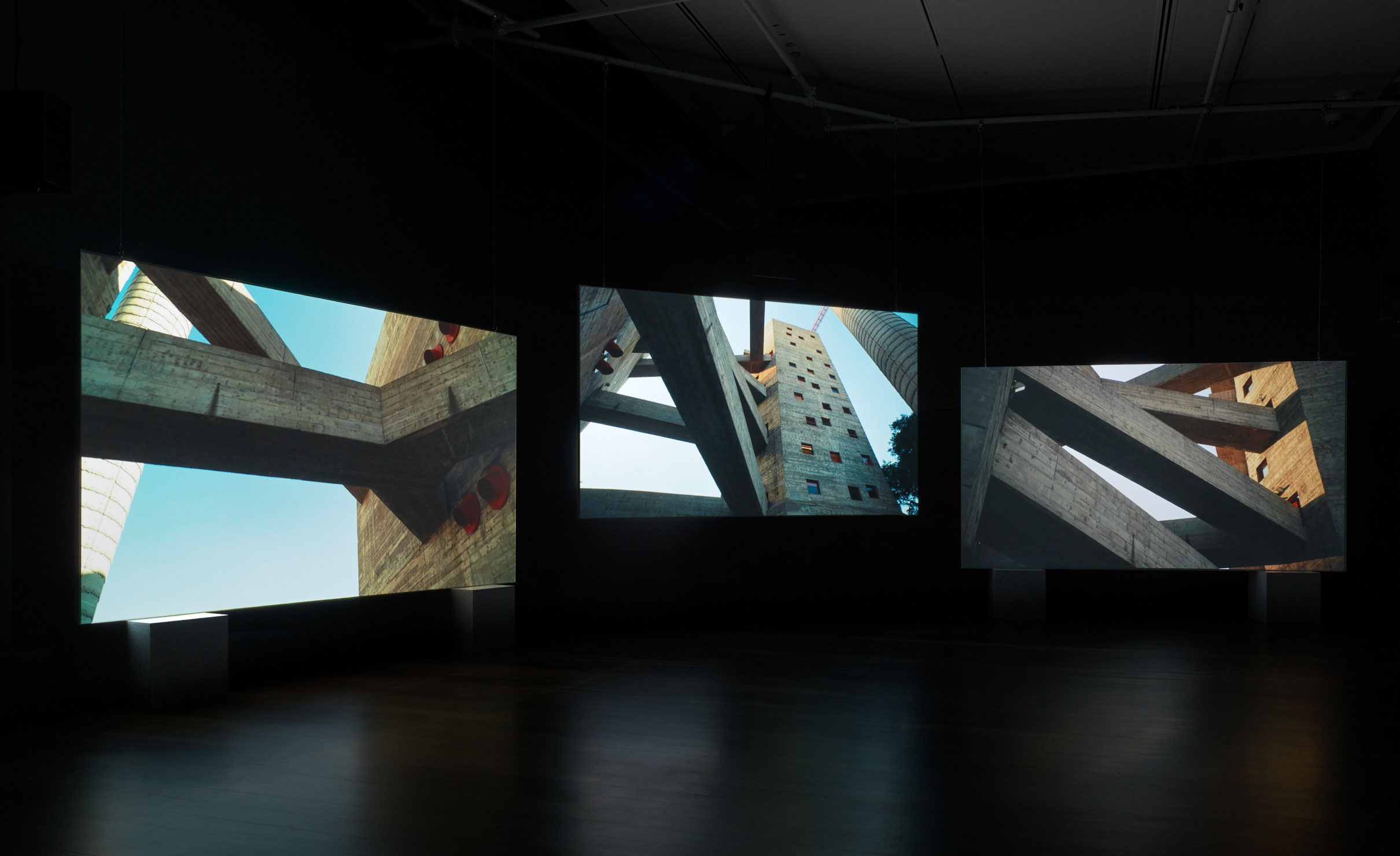 The darkened second gallery on the upper floor of the Samstag is densely populated by terracotta pieces created by Adelaide artist Helen Fuller. This exhibition space was designed by Khai Liew, the walls papered dark with an intricate pattern of fine lines, scribblings and buttons that lend an air of infinite, timeless space against which the pieces are set. Imprinted with leaves and seeds, etched and scratched with feather or furlike markings and in colours that include a darkened semi-matt glaze that half-glistens in the low light, an ochre reminiscent of Aboriginal artefacts and a white slip provided from the studio of Kirsten Coelho, each of these biomorphic pieces feel like individual entities.

Some of the pieces have twigs attached with twisted wire, as if they were handles; others look like stalagmites or ancient coral formations, some with contemporary geometric markings, some looking like ancient artefacts excavated from the earth. All demand close and lengthy attention. 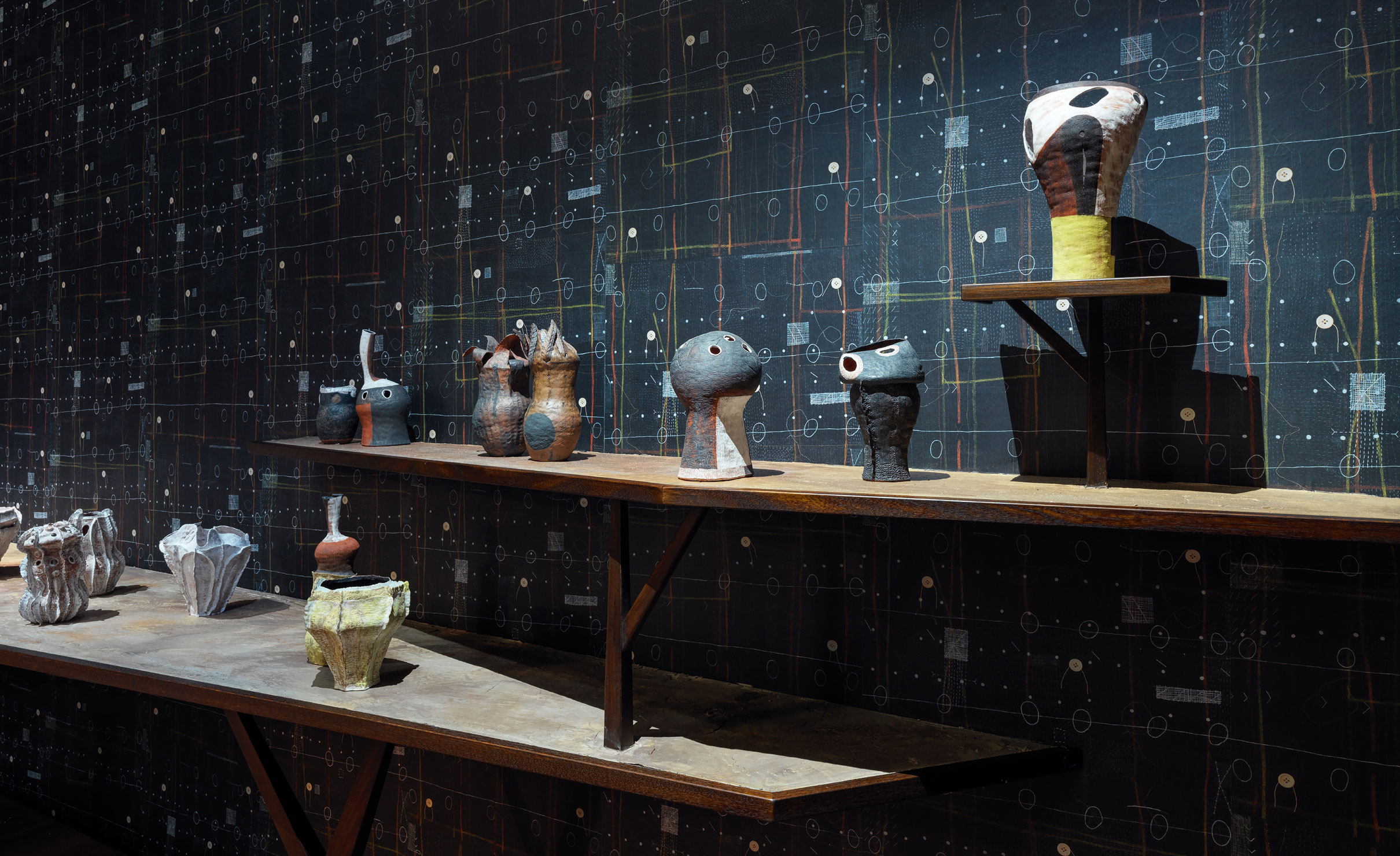 In our time of diminishing nuance and hurried assumptions, the works currently on display at the Samstag Museum warrant a longer visit, giving a sense of transcended time and place, a welcome escape from the restricted movements of our times.

Isaac Julien’s epic works deserve to be watched all the way through from beginning to end, and the small space in which Helen Fuller’s prolific output is on display belies the time needed to unfurl the full impact of her work. Both Julien’s and Fuller’s works contribute to an excellent exhibition that befits the Samstag Museum’s status as one of the leading contemporary art galleries in Australia.

The work of Isaac Julien and Helen Fuller is being exhibited at the Samstag Museum until May 27. Both are being presented as part of the 2022 Adelaide Festival, while Julien’s exhibition is also a collaboration with Perth Festival and Curtin University’s John Curtin Gallery.